In a now-deleted viral clip that he initially shared on Instagram, the rapper can be seen tossing several stacks of $100 bills while he is aboard a boat in what seems to be Florida.

AceShowbiz - Kodak Black is trending on Twitter because of what could be his craziest antic to date. The "ZEZE" rapper enraged people after posting a video of him throwing thousands of dollars into the ocean in addition to flushing more money down a toilet.

As if that was not enough, Kodak took to Twitter on Wednesday morning to post a video of him throwing more money away. The clip featured the rapper putting money, which seemed to be worth of $1,000, into a toilet bowl and then flushed the money down. 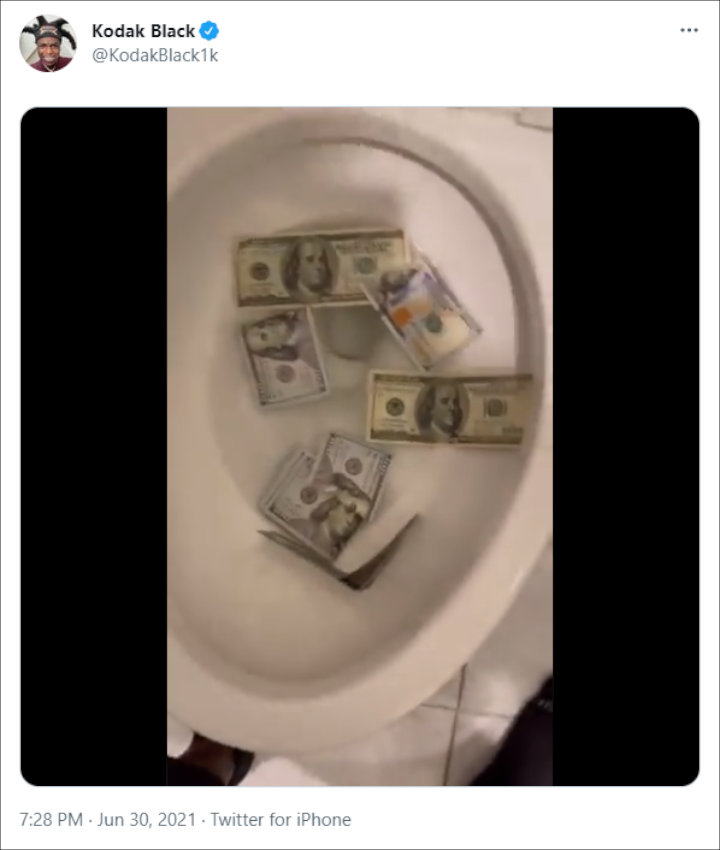 It remains to be seen why he did that, but the spitter, who was released from prison earlier this year, celebrated his 24th birthday on June 11. Some others speculated that it had something to do with his feud with his Sniper Gang protege, Jackboy. Prior to posting the bizarre videos, Kodak wrote on Instagram, "F**k a Friendship, I'm On Businezz! I Ain't Signing Rappers No More These N****s Ungrateful. Made A 'M' Off Lil Jack."

In response to that, Jackboy went on Instagram Live and said, "Don't ask me no questions, just chill and vibe. I ain't answering s**t. I ain't got s**t bad to say about people. You ain't gon' get that from me. You ain’t gon’ have no video of me on YouTube."

He went on saying, "That's my brother at the end of the day. So, I'm not gonna go in detail or explain s**t to nobody. I don’t care. I do not care about Instagram that much I never wanted to be a rapper in my life. I started rapping probably like, three years ago, four years ago."

The feud aside, people were giving mixed reactions to Kodak's antic. "Hes from one of the poorest places in Florida and yet he rather impress people for views instead of giving that money to black poverty stricken families. This could be one of the saddest and out of touch videos I've ever seen," one enraged Twitter user commented.

"kodak black flushing money and throwing it into the ocean when he could've just gave that to someone who needed it..," another user added. "Instead of donating to the ones in need ,he throws it away just to catch attention," one critic wrote. Another criticism read, "At a time when small businesses have shut down and people are struggling to get jobs... how irresponsible. What is he trying to prove?"

Some others, meanwhile, were joking about trying to dive the ocean to get the money. "Me looking for that money kodak black threw in the ocean," one person tweeted alongside a video of someone diving. Using a meme of Mr Krabs from "SpongeBob SquarePants", another user joked, "Mr Krabs after Kodak Black threw 100k in the ocean."