The daughter of Lisa Rinna celebrates her special day at Papi Steak restaurant and LIV nightclub in Miami, Florida with the 'Flip It Like Disick' star and her close friends.

AceShowbiz - Amelia Hamlin has gotten emotional over a luxurious gift from Scott Disick. The daughter of Lisa Rinna and Harry Hamlin teared up as the "Flip It Like Disick" star gave her a dazzling diamond necklace for her 20th birthday.

On Sunday, June 13, the model celebrated her special day at Papi Steak restaurant and LIV nightclub in Miami, Florida with Scott and her close friends. The birthday girl took to her Instagram Story to share moments during her night out.

In one snap, Scott was seen surprising her with a lavish cross necklace embellished with diamonds. Amelia then teared up as her boyfriend placed the piece around her neck. "I'm going to cry!" the fashionista said in the video. After the "Keeping Up with the Kardashians" star finished putting the luxe necklace on her, the model gave her boyfriend a sweet kiss and wiped her tears away. 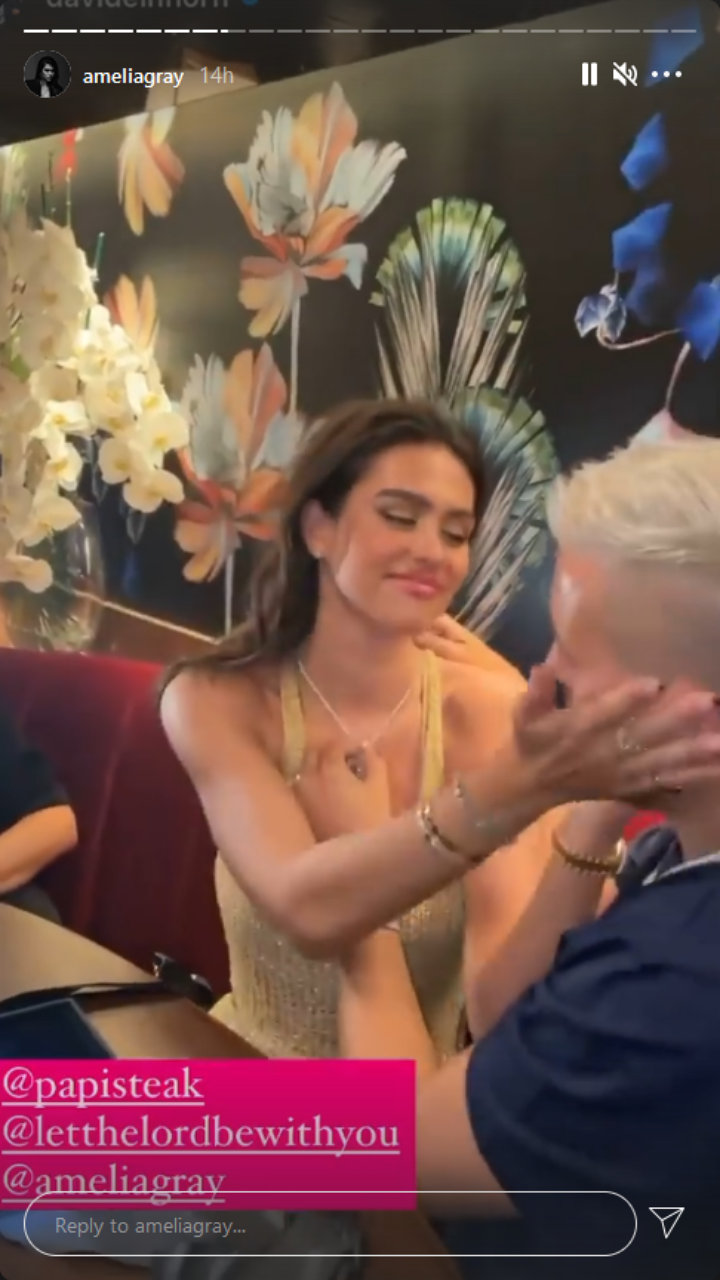 Amelia Hamlin teared up as Scott Disick gave her a dazzling diamond necklace for her 20th birthday.

In the Story, Amelia could be seen sporting a shimmery gold top and matching skirt. To complete her look, the model wore a pair of strappy heels, layers of jewelry bracelets and metallic gold eye makeup. In the meantime, the ex of Kourtney Kardashian opted to dress casually as he donned a navy blue T-shirt and denim pants.

Amelia also shared a glimpse of the towering birthday cake she received from the hot spot. In the Story, her name could be seen splashing across the top layer of the cake, which featured photos of herself and her recent NSFW photo which was taken by Scott.

Showing more from her birthday bash, Amelia posted a series of images from the event on her Instagram feeds. In the first and second pictures, the birthday girl could be seen posing with her sparkling outfit. Meanwhile, the last slide showed the moment when she wiped her tears after Scott presented her with expensive jewelry. "The best birthday a girl could ask for," she wrote in the caption.

Of the birthday party, a source told E! News that Amelia and Scott "started their evening with a late dinner at David Grutman and David Einhorn's Papi Steak restaurant in South Beach." The insider explained further that the couple went to the LIV nightclub in Miami Beach for "a special birthday celebration and made a quick appearance in the DJ booth before heading back to their hotel for the evening."

In May, Amelia herself spoiled Scott with a Harley Davidson motorcycle for his 38th birthday. Showing off the lavish gift was the reality TV star himself on his Instagram Story. Sharing a video of him riding the new bike, he went on to rave about the expensive present by writing, "Thanks @ameliagray," and added red balloons and heart emojis.

Taryn Manning 'Thrilled' After Getting Engaged to Girlfriend