Aside from regretting her chat with Emma Barnett on the BBC radio show, the 'Nothing Compares 2 U' singer apologizes for likening herself to Jamaican men for having children from different men.

AceShowbiz - Sinead O'Connor has boycotted top BBC radio show "Woman's Hour" after what she is calling an "offensive, abusive and misogynistic" interview.

The Irish singer chatted to host Emma Barnett to promote her new book, "Rememberings", on Tuesday, June 1, and quickly regretted the spot, taking to Twitter to apologize for likening herself to Jamaican men for having four children by four different men and calling the interview "abusive and invalidating."

It appears the singer was particularly upset by a reference to a piece in British newspaper The Telegraph, in which music critic Neil McCormick branded Sinead "the crazy lady in pop's attic."

Host Barnett also quizzed O'Connor about the media's coverage of her past mental health battles.

Suggesting McCormick's comment was a reference to Bertha Mason, a character in Charlotte Bronte's 1847 novel Jane Eyre, Sinead said, "I don't think I've ever been perceived as the crazy lady in pop's attic... It's not like I'm trying to attack people with knives or trying to strangle people while I'm walking around in my nightdress."

Following the radio chat, Sinead took to social media and wrote, "Actually found the interview with @Emmabarnett extremely offensive and even misogynistic... One abusive and invalidating question or statement after another: 'madwoman in the attic' At that point I should have ended it. I will absolutely never do Women's hour again [sic]." 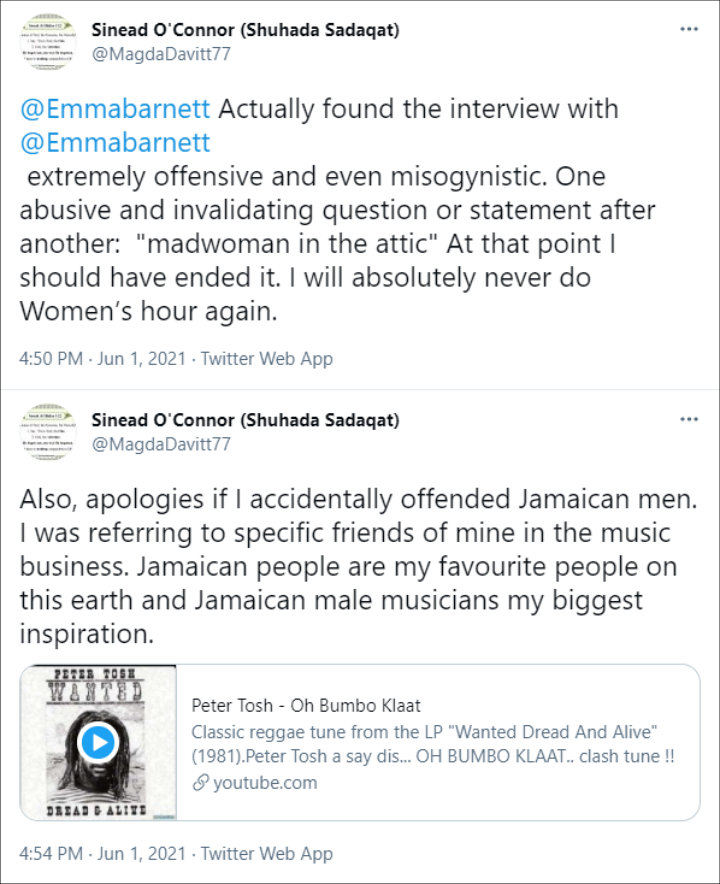 In another tweet, she added, "Also, apologies if I accidentally offended Jamaican men. I was referring to specific friends of mine in the music business. Jamaican people are my favorite people on this earth and Jamaican male musicians my biggest inspiration."