Cher Gets Excited Over Biopic Treatment on Eve of 75th Birthday

AceShowbiz - Cher is celebrating her 75th birthday by announcing a major new movie project, which will take fans on a thrill ride through her life.

Universal Pictures bosses have recruited Oscar-winning screenwriter Eric Roth to pen the script for the biopic, which will be produced by Judy Craymer - the brains behind ABBA musical and movie "Mamma Mia!" - and Gary Goetzman.

Announcing the news on the eve of her birthday, Cher tweeted, "Ok Universal is Doing Biopic With My Friends JUDY CRAYMER,GARY GOETZMAN PRODUCING. THEYY PRODUCED BOTH MAMMA MIA'S & MY DEAR DEAR Friend 4 YRS, & OSCAR WINNER... ERIC ROTH IS GOING 2 WRITE IT‼️ 'FORREST GUMP' 'A STAR IS BORN' 'SUSPECT' TO NAME A FEW OF IS FILMS [sic]." 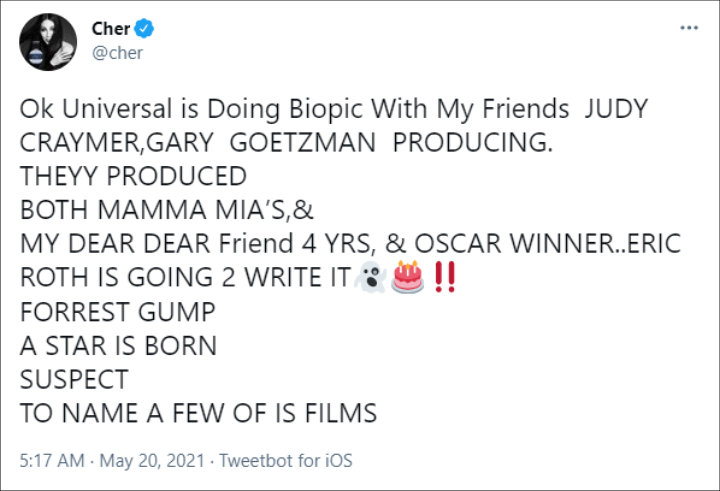 "Gary and I are thrilled to be working with Cher again and this time bringing her empowering and true life odyssey to the big screen," Judy told Deadline. "One cannot help but be drawn to and inspired by Cher's larger than life talent, fortitude, unique wit, warmth and vision."

"Her unparalleled success in music film and TV have inspired generations. We could not be happier to tell her story to cinema audiences."

Cher joked about getting over excited about her biopic project.

Cher turns 75 on Thursday, May 20. Hours after announcing her new project, the "If I Could Turn Back Time" hitmaker returned to Twitter to share, "Ok. got terrible headache...Maybe Got over excited. Is this another Version Of Going 2 take a Shower."

Cher Dating AE Because 'He Knows How to Kiss A**', Says His Friend