Prior to this, the Los Angeles Lakers icon posted-and-deleted a controversial tweet featuring a screenshot photo of Nicholas Reardon at the scene of the shooting of Ma'Khia Bryant with a caption that read, 'YOU'RE NEXT.'

AceShowbiz - Donald Trump's beef with basketball player LeBron James has yet to be over. After the Los Angeles Lakers icon shared a tweet in which he criticized Nicholas Reardon, a Columbus Ohio police officer who shot and killed Ma'Khia Bryant, the former President of the United States has released a statement condemning LeBron's "racist rants."

Shared via political reporter Ben Jacobs on Thursday, April 22, the statement read, "LeBron James should focus on basketball rather than presiding over the destruction of the NBA, which has just recorded the lowest television RATINGS, by far, in the long and distinguished history of the League." Trump went on to note, "His RACIST rants are divisive, nasty, insulting, and demeaning."

While he admitted that James "may be a great basketball player," Trump reminded everyone that "he is doing nothing to bring our Country together." 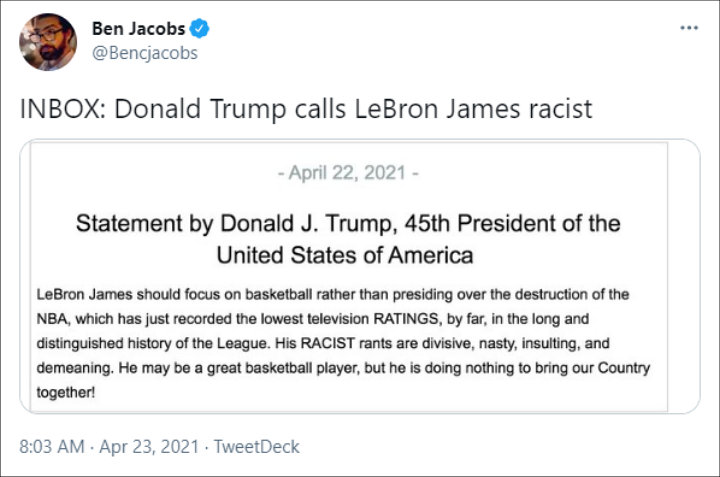 The statement arrives after James posted-and-deleted a tweet featuring a screenshot photo of Reardon at the scene of the shooting with a caption that read, "YOU'RE NEXT [hourglass emoji] #ACCOUNTABILITY." His post sparked outrage among conservatives as one person tweeted, "Lebron James is inciting violence against an Ohio police officer. This is disgraceful and dangerous. Is the NBA okay with this? Is Twitter?"

"Lebron James should be suspended for the remainder of the NBA season and permanently suspended from Twitter," someone else urged. "if any conservative influencer, politician or regular Joe had of made the tweet Lebron James did... they would be INDEFINITELY SUSPENDED on Twitter.. Period..."

After deleting the tweet, the athlete replaced it with one that read, "ANGER does any of us any good and that includes myself! Gathering all the facts and educating does though! My anger still is here for what happened that lil girl. My sympathy for her family and may justice prevail!"

He added in a separate post, "I'm so damn tired of seeing Black people killed by police. I took the tweet down because its being used to create more hate -This isn't about one officer. it's about the entire system and they always use our words to create more racism. I am so desperate for more ACCOUNTABILITY."