AceShowbiz - The feud between Demi Lovato and the frozen yogurt shop she called out goes on. Words have spread around that the "Heart Attack" hitmaker donated $100,000 to The Bigg Chill as her effort to express her apology. The fro-yo shop, however, was quick to shut down the rumors, stressing that they never heard anything from her since the " 'Sorry, Not Sorry' apology."

On Wednesday, April 21, The Bigg Chill issued a statement over the matter via their Instagram Story. "To those of you asking: We have not received any donations from Demi's team," the frozen yogurt shop declared. "Nor do we want one." 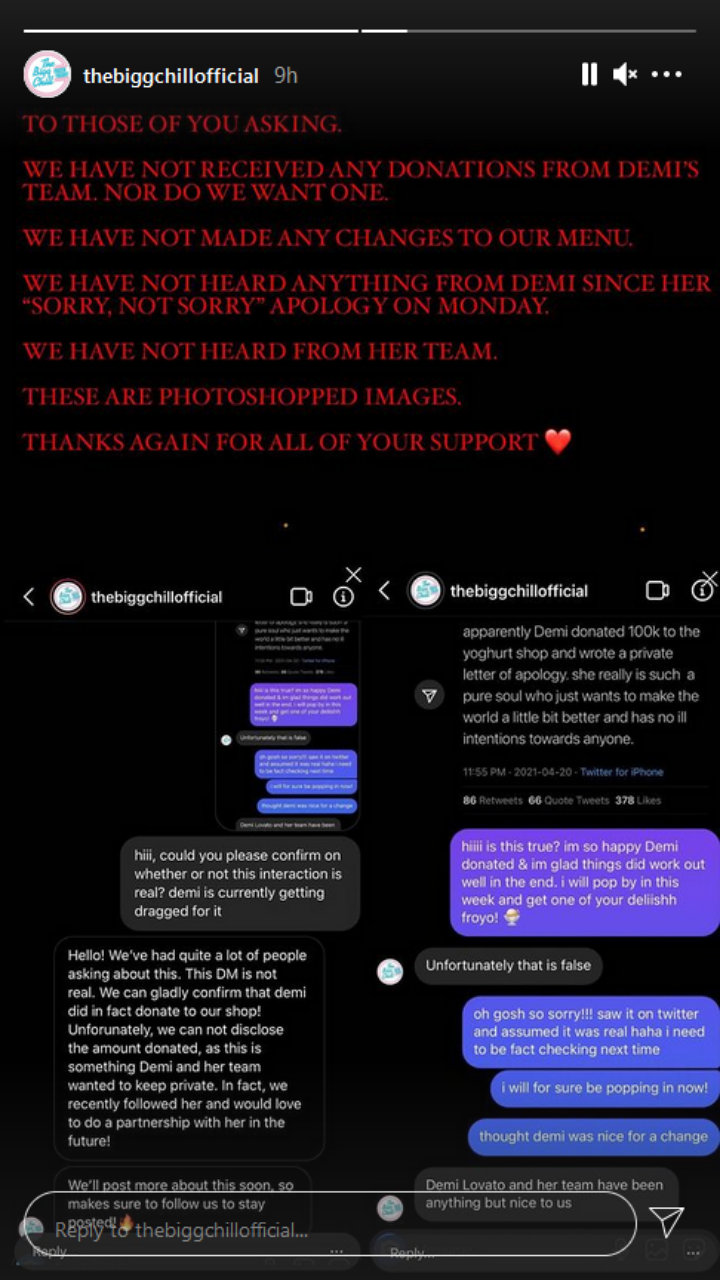 The Bigg Chill denied the ongoing rumors via Instagram Story.

In the same Story, the company further denied the ongoing rumors suggesting they have changed their menu in the wake of Demi's complaints. "We have not made any changes to our menu," they made it clear. "We have not heard anything from Demi since her 'Sorry, Not Sorry' apology on Monday."

Along with the statement, The Bigg Chill included screenshots of Instagram DMs that showed the store confirming they had received donation and "would love to do a partnership" with the "Dancing With the Devil" singer in the future. They insisted that the images were fake. "These are photoshopped images," they declared. "Thanks again for all of your support [love]."

The Bigg Chill's statement came three days after Demi took issue with the shop's advertisement of their diet products. On Sunday, she called out the store via an Instagram post, claiming her visit experience was "triggering" and "awful" since she had to walk past tons sugar-free foods before getting to the counter. She also launched the hashtag #DietCultureVultures.

Reacting to Demi's public complaints, co-owner Cary Russell opened up to LA Times on Wednesday that she was left "hurt" and "shocked" by the pop star's reaction. "I couldn't believe that she would attack us like that," she told the publication.

Cary explained further, "All she had to do is pick up the phone and call me. I would have had a conversation with her and probably handled it and felt differently about it. But I felt like she just came at us and wanted to fight and accused us of things that weren't right."

Demi herself has since issued an apology. In an eight-and-half minute video she posted on Instagram, the "Sober" singer admitted she "jumped to conclusions." She added, "I just want to continue to help make this world a better place, and if I upset some people I'm so sorry. I will listen and try to understand in how I can be a better support for all communities."