Colton Underwood Spotted at Gay Bar Days After Coming Out

Tia Booth, meanwhile, takes to social media to weigh in on her 'Bachelor in Paradise' fling coming out after Bachelor Nation fans urge her to speak out.

AceShowbiz - Colton Underwood is living his best life after coming out as gay. Just a few days after coming forward with his sexuality, the season 23 star of "The Bachelor" was caught on camera hanging out at a gay bar in Denver, Colorado.

The 29-year-old reality star was spotted at the Charlie's on Sunday, April 18. In some pictures obtained by TMZ, he could be seen focusing on his phone. One clip, meanwhile, displayed him sitting still as other visitors danced to Dua Lipa's "Don't Start Now".

Colton, who donned a dark jacket, white T-shirt and a light baseball cap during the outing, was not alone at the bar. An onlooker told the outlet that he was accompanied by his Olympic skier pal, Gus Kenworthy. Gus himself is said to be featured on the former's Netflix docuseries, which will chronicle the new chapter of his life.

Colton's upcoming show, however, has since sparked backlash amid harassment allegations against him. A Change.org petition, which has garnered more than 24,000 signatures out of 25,000 goals, was made to urge Netflix to cancel the project. Along with the petition, there was a note criticizing his treatment to his ex, Cassie Randolph.

"Colton is a former bachelor lead who stalked his final pick, Cassie Randolph," so read the message. "He placed a tracker on her car, sent her and her friends anonymous threatening texts, and was even seen standing outside her window extremely late in the night, resulting in her brother attempting to de-escalate the situation."

"Cassie is a victim of Colton's abuse, and he does not deserve a platform in any way," the message continued. "Regardless of his sexuality, Colton should not be given a platform as a result of his abusive, manipulative, and dangerous behavior."

The former football player, however, apologized to his ex-girlfriend when speaking to Robin Roberts (II) in the April 14 episode of "Good Morning America". In the wake of his coming out, the 25-year-old beauty thanked fans for their outpouring support. 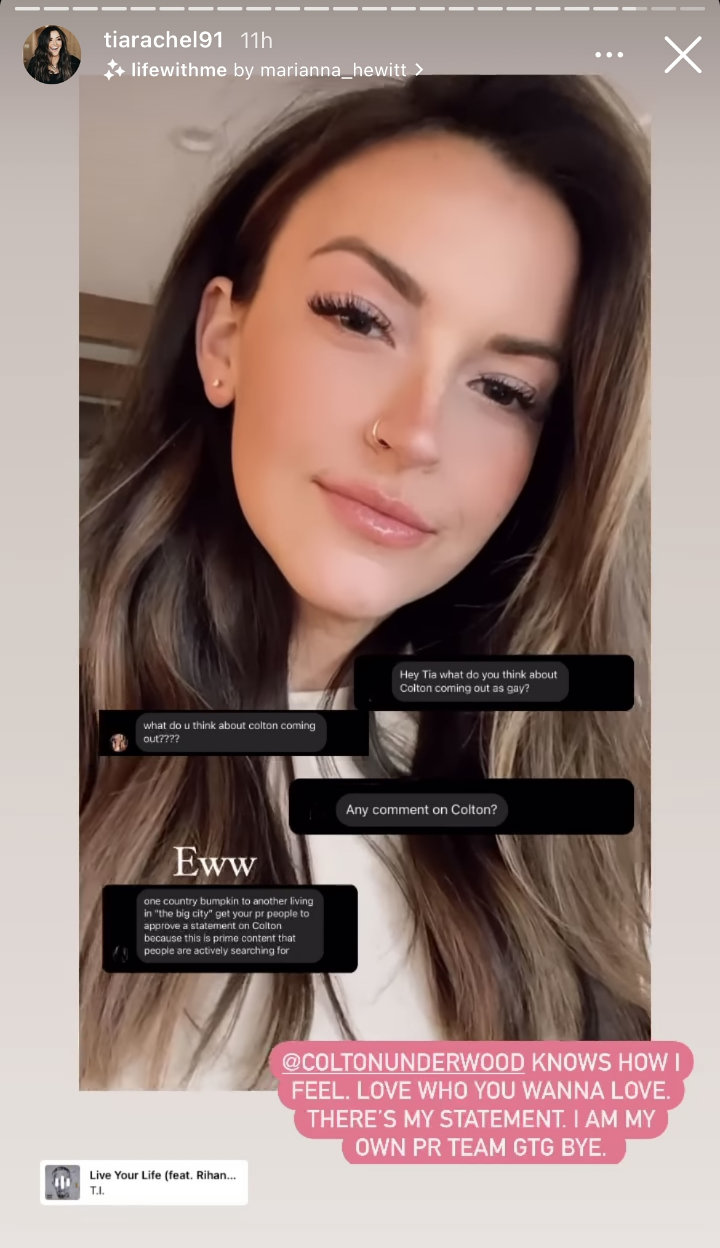 Tia Booth broke her silence on Colton Underwood's coming out.

Also weighing in on Colton's revelation was his other "Bachelor in Paradise" fling, Tia Booth, via Instagram Story. Sharing screenshots of DMs from Bachelor Nation fans urging her to speak out, she wrote, "@coltonunderwood knows how I feel. Love who you wanna love. There's my statement. I am my own PR team gtg bye." She added T.I. and Rihanna's song "Live Your Life".