'Fearless (Taylor's Version)', a re-recorded version of the 'Cardigan' hitmaker's 2008 album, has beaten DMX's 'The Best of DMX' and Justin Bieber's 'Justice' for the top slot of Billboard 200.

AceShowbiz - Taylor Swift has landed another TransAtlantic chart double after taking her reworked "Fearless" album to the top of the Billboard 200 in America.

"Fearless (Taylor's Version)" debuted at number one in the U.K. on Friday, April 16, and now the project has topped the U.S. countdown with the biggest one-week sales of 2021 so far (291,000), making Swift the first woman to land three number one albums in less than a year.

Additionally, "Fearless (Taylor's Version)" helped Swift in securing her ninth No. 1 album. It placed her in tie with Madonna for the second-most No. 1 albums among women. The all-time record was still held by Barbra Streisand with 11 No. 1 albums.

The original "Fearless" was Taylor's first Billboard 200 number one back in 2008. The new version - her ninth number one - features re-recordings of all 13 songs on "Fearless", six bonus songs added to a 2009 reissue of "Fearless", and a collection of "from the vault" songs written for the original album that were never recorded.

Thanking fans on Sunday, April 18, Taylor took to social media and wrote, "Been in the studio all day recording the next one - it's really so amazing what you all have done here." 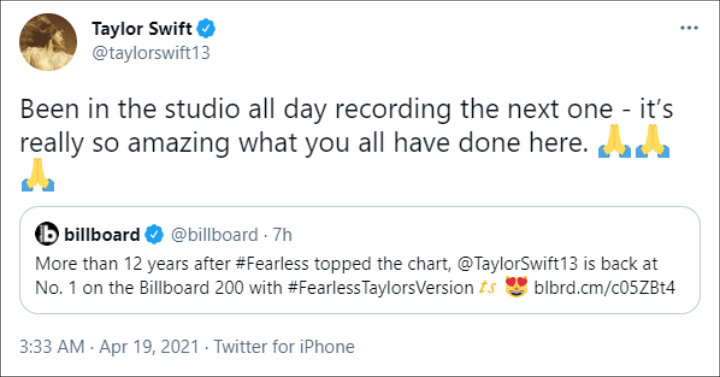 Late rapper DMX's greatest hits compilation, "The Best of DMX", rockets up the chart from 73 to two following his death on April 9.

Justin Bieber's "Justice" falls to three in its third week on the Billboard 200, while Morgan Wallen's "Dangerous" stays put at four and Rod Wave's "SoulFly" rounds out the top five.