Patricia Arquette Recounts Worst Date With Convicted Murderer: He Freaked Me Out

Leaving many shocked with a story of her most awkward date, the 'Medium' alum reveals she once went out with Mark 'Gator' Rogowski who years later raped and murdered his girlfriend.

AceShowbiz - Patricia Arquette has a jaw-dropping story about her past dating life. Joining Twitter buzz that asked people to reveal their most awkward date, the "Medium" alum confessed that she once went out with Mark "Gator" Rogowski, who left her freaked out years before he was convicted of murder. 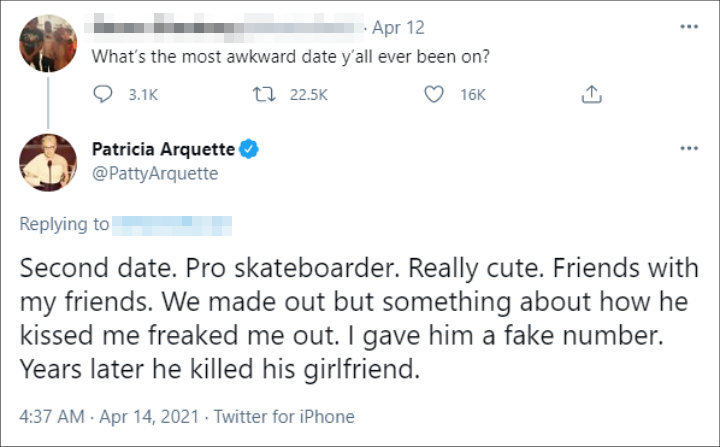 Patricia Arquette spilled her most awkward date on Twitter.

Through a series of tweets posted on Wednesday, April 14, the 53-year-old dished on the awful second date she had with the former professional skateboarder-turned-murderer. "Second date. Pro skateboarder. Really cute. Friends with my friends," she kicked off her revelation. "We made out but something about how he kissed me freaked me out."

Sensing something was off, the Golden Globe winner decided to cut contact with him. "I gave him a fake number. Years later he killed his girlfriend," she noted in the same tweet. When a Twitter user wondered why she got the ick from making out, she reasoned in another tweet, "It felt aggressive. Like pushing me back hard with his jaw and it felt like it was angry."

Patricia Arquette confirmed to a user that the man was Mark 'Gator' Rogowski.

While Arquette did not name names initially, a Twitter user guessed she was referring to Rogowski. In response, "The Act" star replied, "Yes right. He raped and killed. His girl friend who was best friends with his x girlfriend." Having joked that her daughter thinks she is overprotective, she rounded up her story by reminding others, "Moral to the story -- Trust your instincts."

Patricia Arquette ended her shocking story by reminding others.

A former popular skateboarder, Rogowski sexually assaulted and murdered 22-year-old model Jessica Bergsten in March 1991. At the time, it was said that Bergsten was violently attacked by Rogowski when she went to his apartment to watch a rented movie. He later confessed to the crime and was sentenced to 31 years to life in prison.

In April 2020, California Gov. Gavin Newsom denied Rogowski's request for parole. The San Diego Union-Tribune reported that Newsom declared Rogowski appeared to only have a "superficial understanding of what triggered him to inflict prolonged sexual violence on his victim and then kill her." The governor also found the convicted murderer still poses an "unreasonable danger to society."