Though she quickly deletes the tweet and apologizes for it, that doesn't stop people from coming at the actress/talk show host for getting ahead with the message of condolences while the rapper is still on life support.

AceShowbiz - DMX is not dead just yet, but Claudia Jordan seemingly wasn't aware of this. Amid reports of his hospitalization, the talk show host falsely thought that the rapper had passed away and prematurely sent a message of condolences on Tuesday, April 6.

"Rest in Paradise DMX," so the former star of "The Real Housewives of Atlanta" posted on her Twitter page. She quickly realized her mistake and deleted the tweet, before coming up with a new one to apologize for the false announcement.

"I'm sorry," she simply wrote, adding a praying hands and a broken heart emoji. When a user suggested that Claudia possibly "thought that the media had announced that DMX passed away," she admitted, "I did. I deleted it. And apologized. I feel awful." 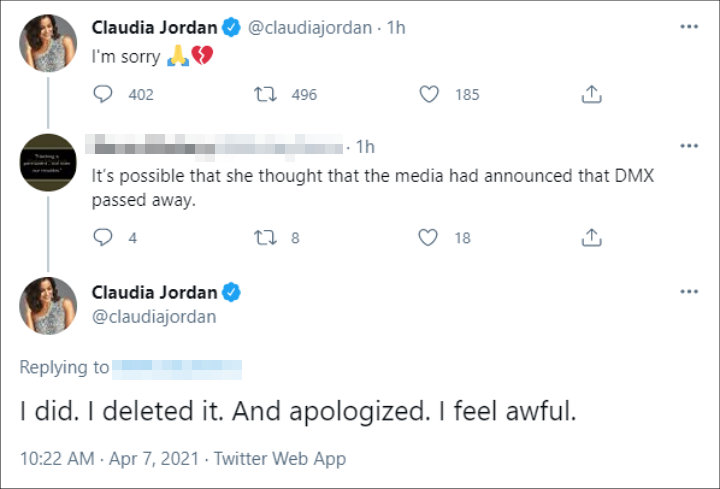 Claudia's apology and explanation, however, wasn't enough to stop the barrage of criticism leveled at her for spreading the false death report. "He is still on life support dumb b***h," one person called her out while correcting her.

"Girl you better know what you are talking about...," another advised the 47-year-old model. Another baffled person asked, "Who asked her to do this??" while another threatened, "If this is false she needs to be officially canceled."

Another person, who seemingly believed DMX was dead, thought that "it's not her place to confirm s**t tf." Someone else agreed, adding, "Claudia Jordan tweeting that about DMX and not letting the family announce it if it's true shows she a sc*mbag type of chick."

To clarify the matter, DMX is still alive though he remains on life support in a New York hospital. TMZ has just reported that the 50-year-old hip-hop star will undergo a battery of tests on Wednesday to determine the level of brain function. The results of the tests will reportedly determine decisions the family may have to make.

As reported before, DMX, whose real name is Earl Simmons, suffered a heart attack at his home that may have resulted from an overdose on Friday night, April 2. He reportedly had to be revived three times and was left without needed oxygen to his brain for nearly 30 minutes.

His manager Nakia Walker said the rap star is in a "vegetative state with lung and brain failure and no brain activity." On Monday, family, friends and fans of the "Party Up (Up in Here)" hitmaker gathered outside White Plains Hospital for a prayer vigil as some of his children have reportedly visited him in the hospital.