Lil Nas X himself has responded to Sada's controversial post on Instagram Story which has since been deleted, though the Grammy-winning musician seems to take the shade lightly.

AceShowbiz - Sada Baby is regretting his words about Lil Nas X. After being slammed for wishing death on the Grammy-winning rapper, Sada made use of his Instagram account to explain his side and apologize to Lil Nas X.

"I said what I said in that post because of the shoes," Sada wrote in the post, referring to Lil Nas X's controversial "Satan Shoes" in collaboration with MSCHF which sales are blocked by Nike. "That's it. The Devil shoes, the Devil in the video. Giving the Devil a lapdance. Wild, that s**t crazy."

Expressing his disagreement of both "MONTERO (Call Me By Your Name)" music video and the shoes, Sada went on to say, "That will never be no s**t I sympathize with or empathize with or agree with. But I wasn't wishing death on blood for real, nobody want a n***a dead."

"His main audience is kids," Sada argued. "What you showing to kids is you giving the Devil a lapdance. I don't want to walk in a room anywhere with any of my family and see my kids imitating what they see in that video in any way. That's not something I agree with. But yeah, I apologize to Lil Buddy if he feel I wanted him dead."

Lil Nas X himself has responded to Sada's controversial post on Instagram Story which has since been deleted. The "MONTERO (Call Me By Your Name)" hitmaker said, "this is so f**ked up omg." However, the "Old Town Road" star appeared to take it lightly as he made use the opportunity to promote his new new song, writing, "everyone stream the number 1 smash hit Montero (Call Me By Your Name) out now on all platforms!" 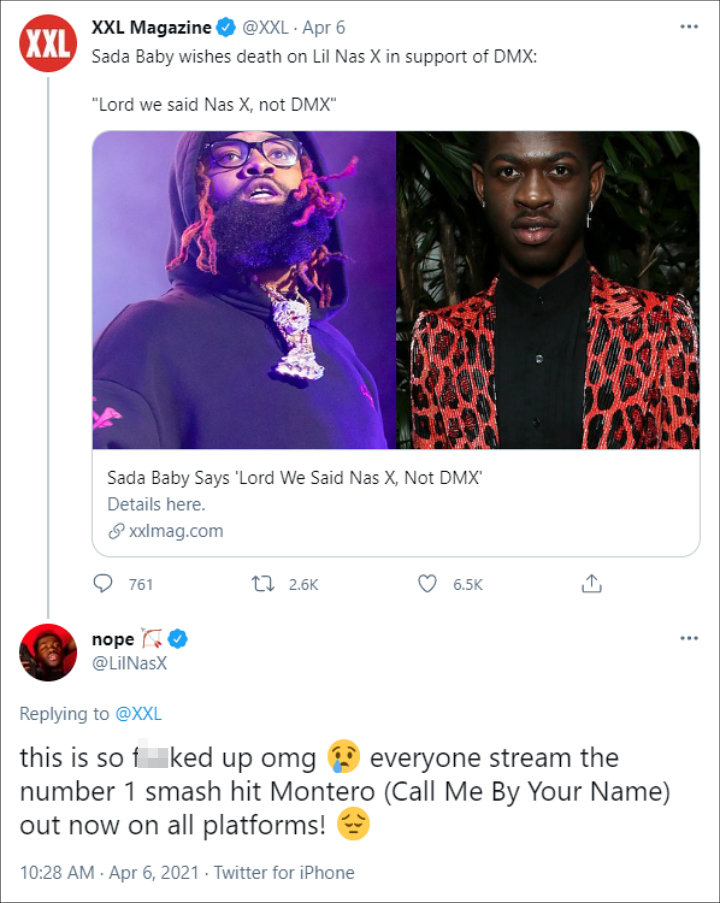 Sada was criticized for seemingly wishing death on Lil Nas X by regramming a post that read, "Lord we said Nas X, Not DMX". He's referring to the "Party Up (Up In Here)" hitmaker who was hospitalized after suffering a heart attack following a reported overdose on Friday, April 2.

Fans weren't impressed by the shade and quickly slammed him over the post. "This world would be so much better if everyone just minded their own business," one person reminded everyone. "Weirdo s**t. I don't get why anyone wishes death or supports that message when it comes to innocent a** people," another user added.