Through an audio recording she posted on Twitter, the 'Bodak Yellow' singer reveals that she and her Migos member husband had sex 'right after' the recording session of their song.

AceShowbiz - Cardi B has gotten candid about one steamy studio session she had with husband Offset. On Monday, April 5, the "Bodak Yellow" hitmaker took to her Twitter account to offer bits of details about their dirty deed that took place "right after" the two of them recorded "Um Yea".

"I don't want to give you this weird, fake a** romantic, awkward story, but I remember this one time when I was in the studio with Offset," the Grammy Award winner started out in the audio recording she posted on the micro-blogging site. "And he was doing 'Um Yea,' the song that me and him have together."

Refusing to leave anything to the imagination, the 28-year-old raptress went on detailing, "And while he was doing the song and everything, he kept looking at me and smiling and s*** while he was making the song." 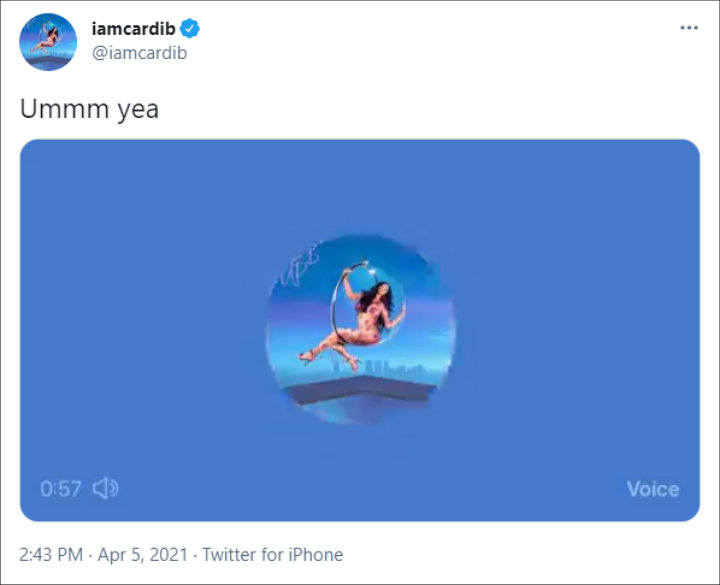 Cardi B shares steamy studio session with Offset on Twitter.

"And then I told him, 'I want to get on the song,' " the mother of one went on explaining. "So I just started writing my verse and everything and he was looking at me like, 'Oh s*** girl!' " Not holding anything back, she added that they had sex "right after" the recording.

Cardi's Twitter share was quickly raided by many. "LMFAOOOOOOOO Sis it's 3:44 a.m. Stop making me jealous. I want this. I'm tired of being alone, d**nit [skull and yellow heart emojis]," one user wrote. "Im gonna hear that song differently now lol. You killed that verse btw [Fire Fire emojis]," another one commented.

"Um Yea" was released in 2017. Aside from "Um Yea", Cardi and Offset have worked on a number of songs together, including "Lick", "Motorsport", and "Drip".

Cardi and Offset tied the knot in the same year "Um Yea" was released. They welcomed their first child together, a daughter named Kulture Kiari Cephus, in July 2018. Less than two years later, she was seen taking Kulture to Show Me the Signs campaign, which paid tribute to Breonna Taylor and Black women killed by police.

In a 2020 Woman of the Year interview for Billboard, the "WAP" hitmaker explained her move to involve her young daughter. "I want her to grow up knowing how the world really is," she reasoned. "My daughter came out of my pussy rich. She lives a different lifestyle than I lived. This girl gets in a pool every single day; I can't swim because I barely went to the pool. There was only one community pool where I'm from."