Former First Lady Hillary Clinton, former senator Bernie Sanders as well as celebrities like George Takei and Sophia Bush also send their condolences after an officer was killed in the violent attack.

AceShowbiz - Joe Biden, Meghan McCain and more have reacted in the wake of a violent attack at a security checkpoint on the U.S. Capitol on Friday, April 2. A man, who has been identified as Noah Green, rammed his car into two officers at the barricade, killing one officer, William "Billy" Evans, and leaving the other injured.

In an official statement released after the horrific incident, the president said, "Jill and I were heartbroken to learn of the violent attack at a security checkpoint on the U.S. Capitol grounds, which killed Officer William Evans of the U.S. Capitol Police, and left a fellow officer fighting for his life." He sent his "heartfelt condolences to Officer Evans' family, and everyone grieving his loss."

"We know what a difficult time this has been for the Capitol, everyone who works there, and those who protect it," the president continued, as he remains updated on the situation. "I have been receiving ongoing briefings from my Homeland Security Advisor, and will be getting further updates as the investigation proceeds."

McCain, meanwhile, condemned the attack. As the daughter of later senator John McCain, who worked in the Capitol building, she expressed her rage on Twitter. "So much senseless loss and tragedy... My deepest condolences for the horrible loss of Officer Evans life. My heart and prayers for his family and the entire @CapitolPolice force," she wrote, adding, "Thank you for your bravery and service Officer Evans...." 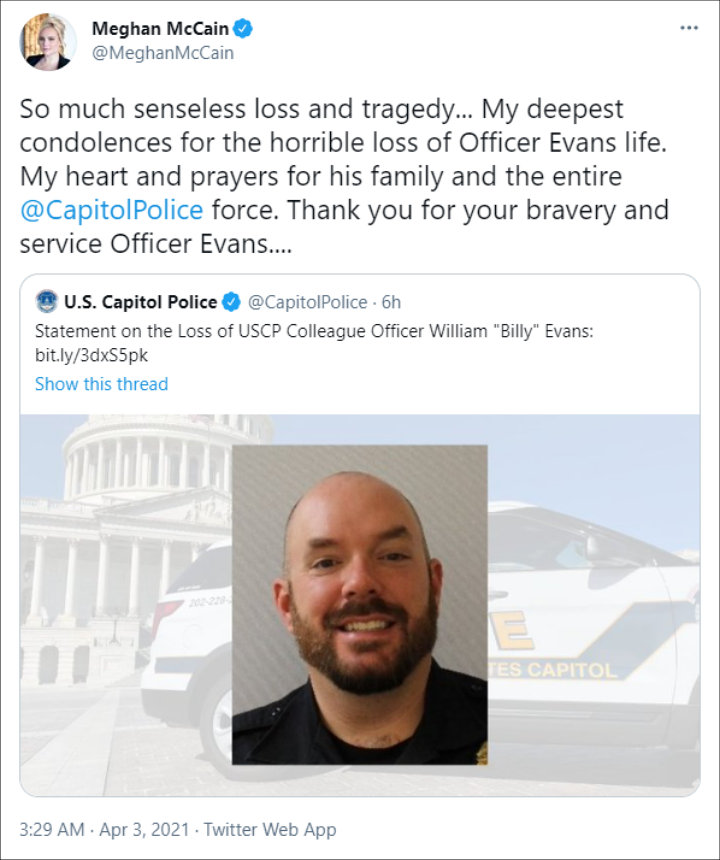 Vice President Kamala Harris also shared her reaction on the blue-bird app. "In an inexplicable act of violence, a brave US Capitol Police Officer, William Evans, was killed in the line of duty while another officer fights for his life. Officer Evans made the ultimate sacrifice to protect the Capitol. Our hearts go out to his family and loved ones," she mourned the officer's death.

Expressing her gratitude to others in line of duty, she continued, "Doug and I are grateful for the Capitol Police, the National Guard Immediate Response Force, and all who responded swiftly to the attack. We continue to be proud of the courageous men and women who defend the Capitol, especially during this challenging period." 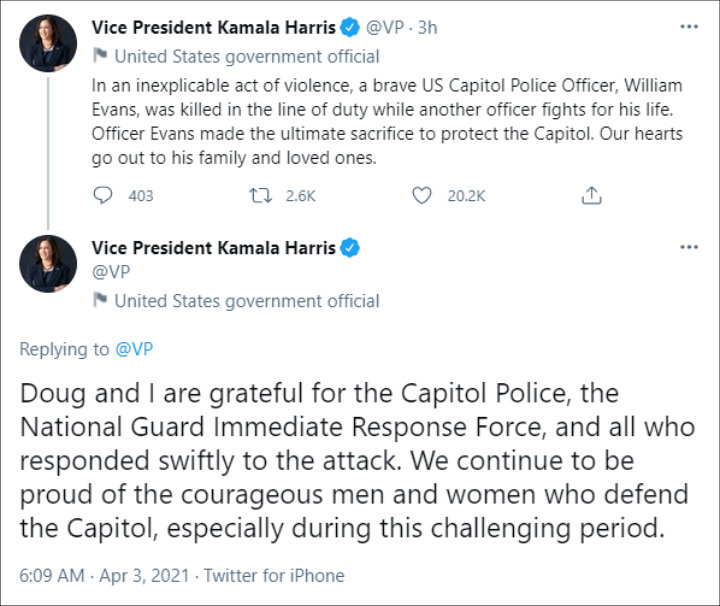 Former Secretary of State Hillary Clinton posted on her own account, "My heart goes out to the family of the officer killed in today's horrific attack on the Capitol complex. I'm praying for the recovery of the officer still in the hospital. Capitol Police don't just protect our lawmakers. They help protect our democracy. We owe them a great debt." 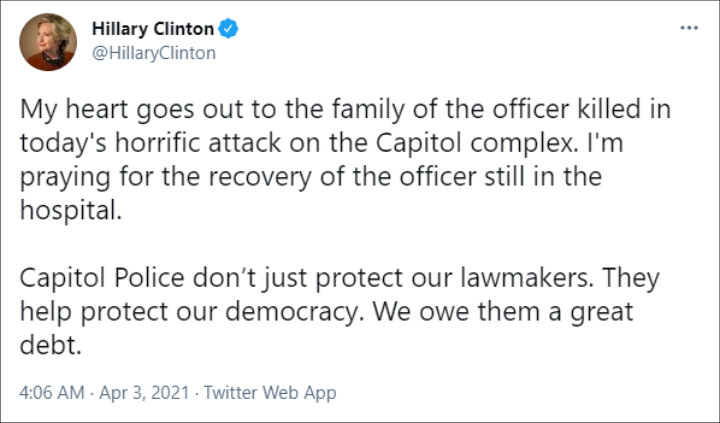 Fellow politician Bernie Sanders sent a similar message to the two victims in the attack. "Jane and I send our deepest condolences to the loved ones of Officer William Evans who was killed protecting the Capitol. Our thoughts are also with the officer who remains hospitalized from today's attack," he wrote on behalf of him and wife Jane O'Meara. 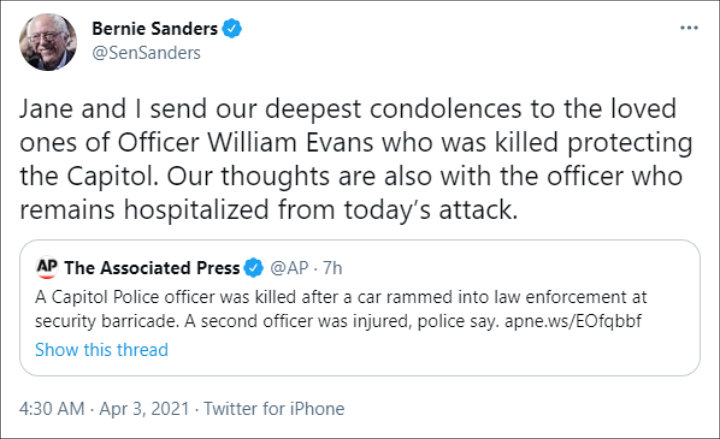 Actor George Takei tweeted, "My heart goes out to the family and loved ones of the officer killed at the attack on the Capitol today. And my sincerest thanks go out to all those who are continuing to safeguard our democracy from those who would destroy it."

Sophia Bush, meanwhile, was saddened and enraged by the violence. "This is so damn sad," she lamented. "The officers protecting our Capitol since the domestic terror attack on Jan6th deserve THANKS. Not assault. Not to be murdered. I'm furious. I'm heartbroken. And I fear for what the outcome of this spun up rage is. Is this connected to the big lie? Just awful." 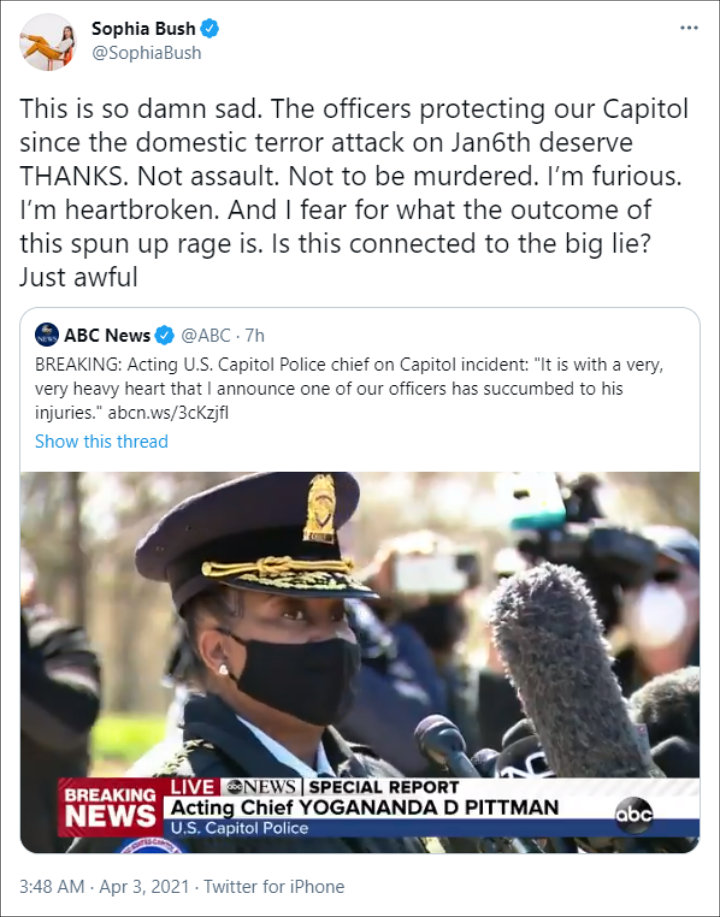 According to the U.S. Capitol Police's official statement, "just after 1 P.M., a man in a blue sedan rammed his vehicle into the North Barricade at the U.S. Capitol, striking 2 USCP officers. ... The man exited the vehicle with a knife and ran toward our officers." He was shot by one of the officers and later died inside a hospital.