Before finding out the sex of his first child, the 'Savage Love' hitmaker predicts that his baby will be a boy considering his pregnant girlfriend Jena Frumes' baby bump 'looks like a ball.'

AceShowbiz - Jason Derulo has gone all out to unravel the gender of his first child. Just days after going public with happy news about his girlfriend Jena Frumes' pregnancy, the "Talk Dirty" hitmaker revealed that he has thrown an extravagant gender reveal party in the Bahamas complete with a massive blue fireworks display.

Making use of Instagram on Tuesday, March 30, the 31-year-old posted a video to recap the party held at Baha Mar resorts. For the bash, he wore a blue shirt in the hopes of a son, while his girlfriend toted a bright pink bag as she wished for a daughter. In the caption, Jason asked his followers to make their own guesses before the video ends.

The epic celebration was made merry with dancers and live music. After blue fireworks lighted the night sky, Jason shouted in the clip, "It's blue! It's a boy!" Aside from the video feed, the "In My Head" singer also posted on Instagram Story a photo of him and Jena together with blue fireworks in the background. Over the image, he wrote, "It's a boyyy!"

Jason's girlfriend Jena also took to Instagram to share the excitement over their baby's gender reveal. Sharing the same video, she captioned her post, "It's a BOY [love] Thank you to @bahamarresorts for throwing us a special gender reveal for the family." 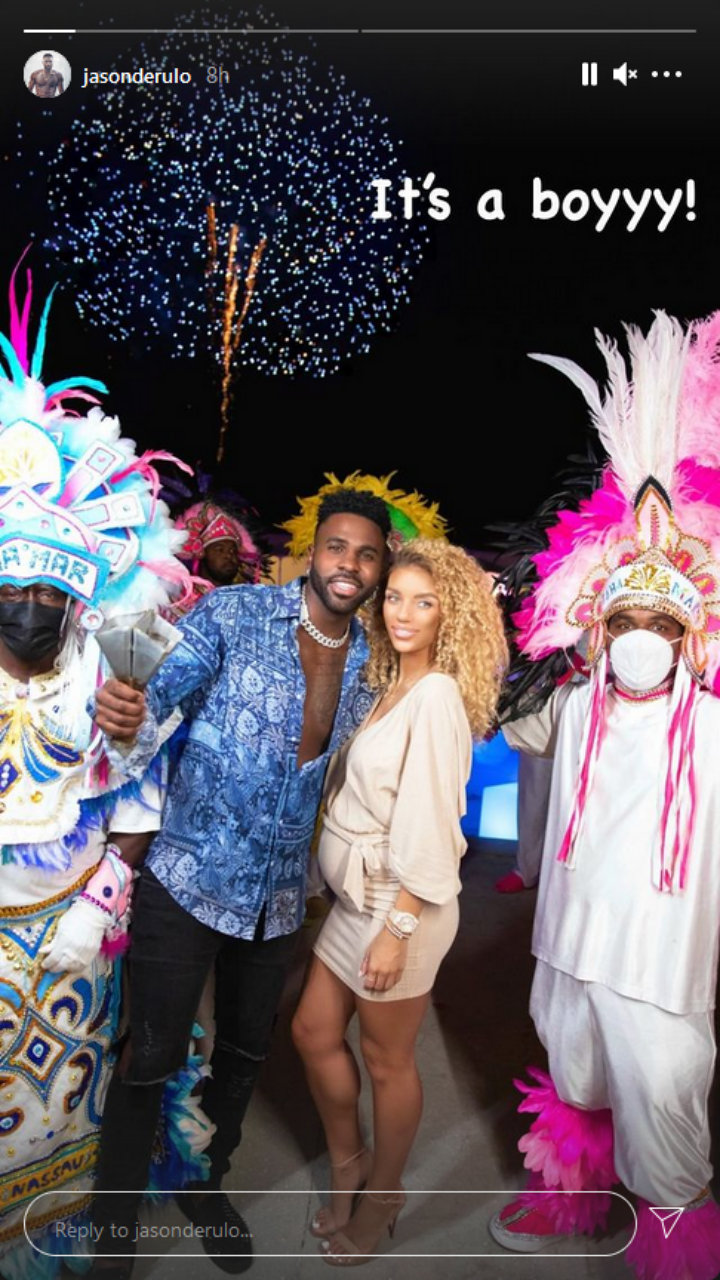 Before putting out the gender reveal video, Jason has already predicted that his first child will be a boy. In a video he posted one day prior, the "Savage Love" singer reasoned that Jena's baby bump "is sitting kinda low and it looks like a ball." Jena, on the other hand, thought their baby will be a girl since she has been "clumsy and moody."

The gender revelation clip comes just two days after the "Take You Dancing" singer announced that he is expecting a baby with his girlfriend. Posting a montage of him and the mom-to-be walking on the beach during their babymoon in the Bahamas, he expressed how excited he is by writing, "Couldn't be more excited for this new chapter in our life @jenafrumes @bahamarresorts."

Jason went public with his relationship with Jena in March 2020. He revealed that he met the 26-year-old model at the gym just before the coronavirus pandemic hit the country. When the lockdown was announced, the two of them moved in together. Of it, he told Closer magazine, "It kind of solidifies things when you're spending that much time around somebody. You either love it or you hate it."

Jason Derulo and Girlfriend Are Proud Parents to Baby Boy