Before reacting to her ex-boyfriend's declaration that she is not the woman he thought she was, the 'Tap In' raptress claims she 'endured too much betrayal and hurt behind the scenes.'

AceShowbiz - Saweetie had some words to say to Quavo following their breakup. After her ex-boyfriend expressed his disappointment over her single status declaration on Twitter, the "Tap In" hitmaker sweetly told him to "take care."

The 27-year-old beauty shared her message on Twitter on Friday, March 19. "Take care," she simply noted while retweeting her ex's post that read, "I had love for you and disappointed you did all that. You are not the woman I thought you were. I wish you nothing but the best."

Hours earlier, Saweetie put out a tweet to confirm that she is now back on the single market. "I'm single. I've endured too much betrayal and hurt behind the scenes for a false narrative to be circulating that degrades my character. Presents don't band aid scars and the love isn't real when the intimacy is given to other women," she penned.

"I emotionally checked out a long time ago and have walked away with a deep sense of peace and freedom," the femcee, whose real name is Diamonte Quiava Valentin Harper, continued in another tweet. "Excited for this new chapter of elevation." 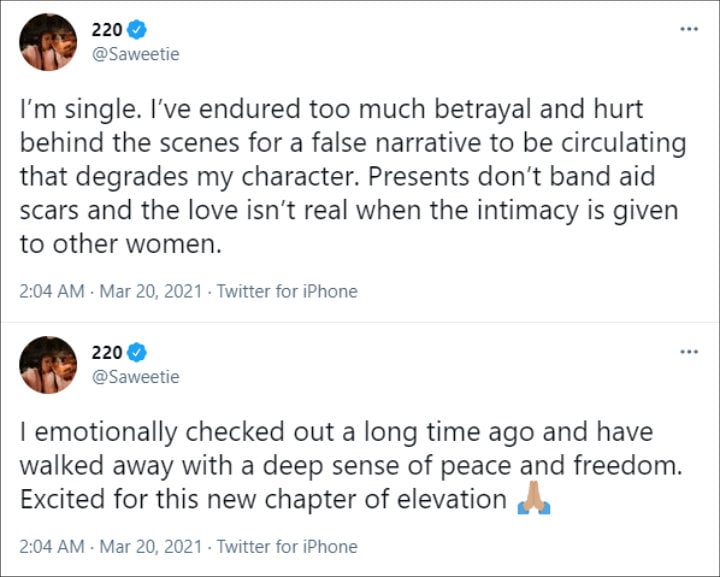 In response to the "Best Friend" raptress' tweets, Quavo wrote on his own Twitter page, "I know you want to make this into a show so I'll play my part just this one time." He then added, "I don't normally put my business out there, especially my personal life. I feel the need to address this so there are no false narratives."

The indirect exchange between Saweetie and Quavo came just a day after they were hit with split rumors. On what prompted the speculations, fans of the former couple noticed that the two of them have not following each other anymore on Instagram.

Earlier in March, Saweetie made an appearance on her ex-boyfriend Justin Combs' Revolt TV show called "Respectfully Justin". During the discussion, she opened up about the most disrespectful thing a partner has ever done to her while not mentioning any names. "I think it's lying," she pointed out. "It's the principle, I don't like liars."

Saweetie and Quavo began dating in 2018. She went public with their romance on daytime talk show "The Real".