Defending her ex-boyfriend from 'repulsive' online racism, 'The Bachelor' contestant claims that she does 'respect the decisions' he made to end their relationship.

AceShowbiz - Rachael Kirkconnell has been left bewildered by the attacks Matt James has to endure over their split. Upon learning that her ex-boyfriend received online racist attacks for ending their romantic relationship, the season 25 contestant of "The Bachelor" candidly admitted she was "taken aback" by the insults.

The 24-year-old TV personality reacted to the criticism surrounding her ex via Instagram Story on Wednesday, March 17. "I am taken aback by what I've seen tonight. If you think that attacking a person I care about with racist insults is what I would ever want, you haven't been listening," she first argued.

"Some of the things I've seen being said to and about Matt are repulsive. I respect the decisions that Matt has had to make during this experience," the reality star further stressed. "If you are directing hate towards him, please stop. Recognize someone's humanity and think about the impact your words have." 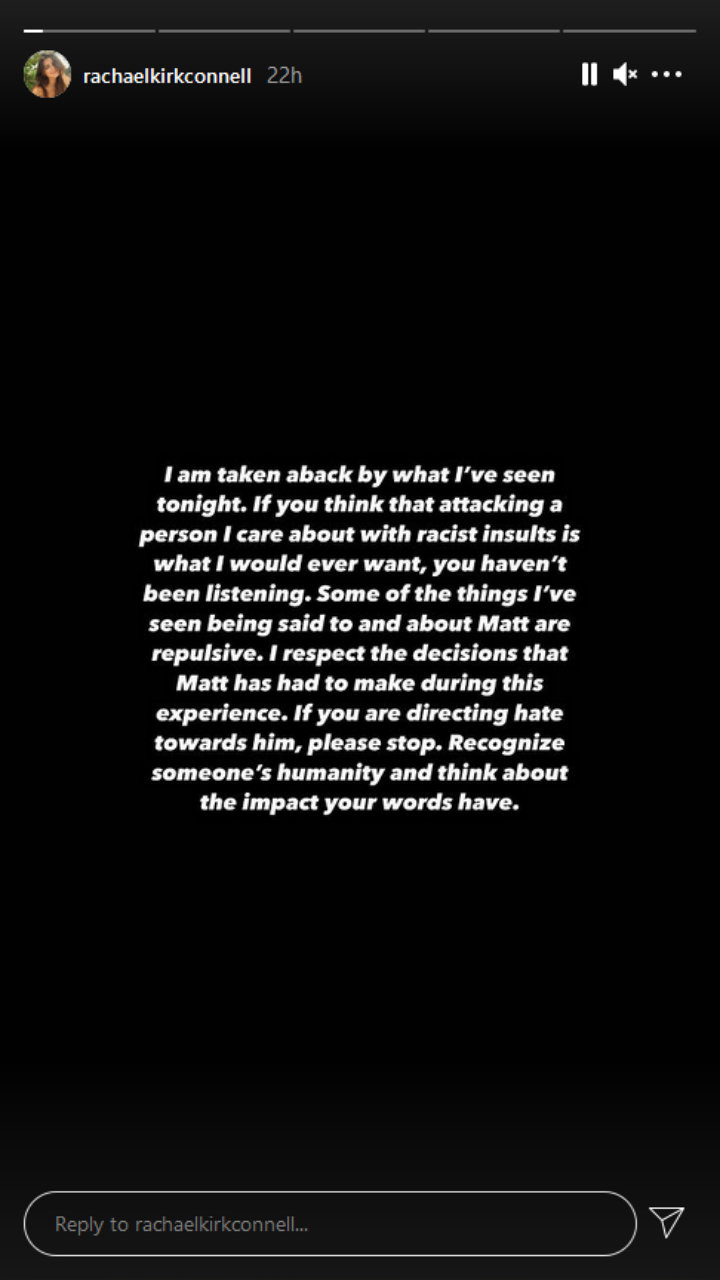 Rachael and Matt left season 25 of "The Bachelor" as a couple. After being together for a while and as her photos at the 2018 antebellum-themed party surfaced, they parted ways. In the "After the Final Rose" aired on Monday, March 15, the footballer revealed that he broke up with her because she "didn't fully understand my blackness and what it means to be a Black man in America and what it would mean for our kids."

Rachael has previously addressed their split. In an Instagram post, she wrote, "i knew from the first night i met matt that he was something special, and i was praying to share something exceptional between the two of us if that's what was meant to be."

"while i never expected this outcome, i respect his decision completely. of course i wish circumstances were different, but i still feel blessed for the time we did have together and the memories we made," she added. "i got to fall in love, and i truly believe he was the love of my life. he will always hold a piece of my heart. i'll always be hopeful and believe what's meant to be will be."