Margaret's comments earn her backlash on Twitter as some people accuse her of shaming Jennifer for her drinking issue, though Margaret denies the accusations, saying that she's just concerned.

AceShowbiz - There is more drama between "The Real Housewives of New Jersey" co-stars Margaret Josephs and Jennifer Aydin. In a new episode of the Bravo reality TV show, Margaret commented on Jennifer's wild night at Teresa Giudice's pool party for seemingly drinking too much.

Not only taking a tumble at the bash, Jennifer had to be carried out to her husband Bill's car. In response to that, Margaret speculated that Jennifer might be having a seious problem with booze. "I'm all about a good time, but this is not the first time that I've seen 'Tequila Jennifer,' " Margaret said in a confessional. "This is falling into, like, serious drinking issue problems."

Her comments earned Margaret backlash on Twitter as some people thought she was shaming Jennifer for her drinking issue. "Ok auntie @MargaretJosephs you can't have it both ways. Either you are about female empowerment or not. Shaming @JenniferAydin for drinking is not cute. The men do it & you laugh, but for some reason Jen doing it is a problem for you. You are no Mother Teresa cut it out #RHONJ," one person called her out.

The tweet didn't go unnoticed by Margaret as she replied to the user, "Did I shame her or was I concerned? When anyone's drinking turns a corner on any given night male or female I'll say something . It's not empowering someone when you don't hold them accountable and be honest with them."

The person fired back, "Ask yourself that question. Didn't you call her the droptail Queen? Funny, must've missed when you've said something about the guys. Hold everyone equally accountable otherwise you seem disingenuous." 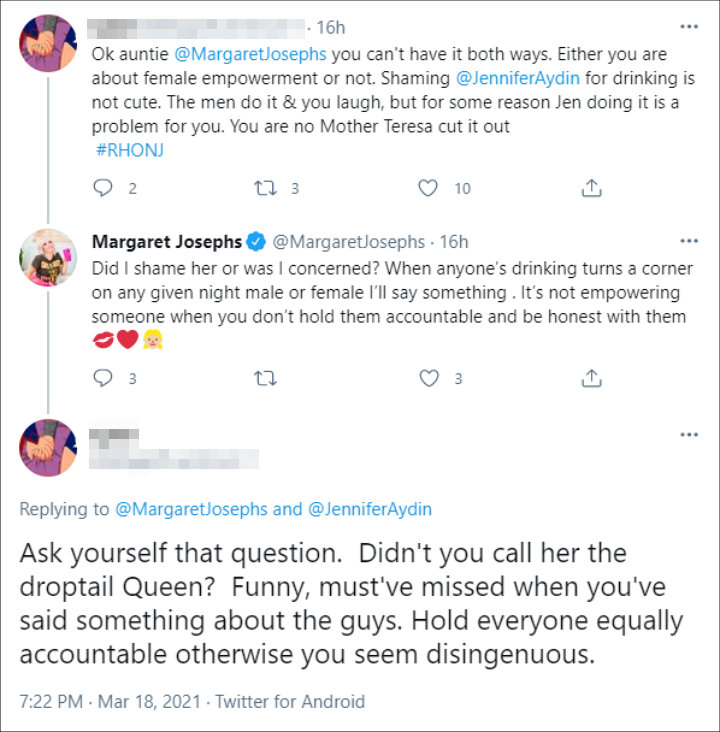 Jennifer, meanwhile, claimed that she's not "alcoholic." Explaining to Us Weekly, the 43-year-old star said, "It's not even that I was drinking more. You have to understand, I'm a social drinker. I hadn't been socializing in months, so [my] tolerance was non-existent before -- like, it's below zero."

"I don't know how many drinks it takes to get to the center of a lollipop, OK? I don't, so excuse me if I get a little excessive and get turned up because I don’t know what my limits are," she added. "I haven't been out in a long time. I'm extremely stressed out with everything that’s going on. I'm at a party and I'm about to get drunk. I'm not an alcoholic, I just like to have a good time."