Alexi McCammond, the magazine's newly-appointed editor in chief, has reportedly sent an apologetic note to the staff after a group of them wrote a letter condemning her derogatory comments.

AceShowbiz - Olivia Munn is not letting Alexi McCammond's past racist tweets slide easily. A few days after more than 20 Teen Vogue staff members slammed their newly-appointed editor in chief over her 2011 offensive tweets towards Asians and gay people, the "Love, Wedding, Repeat" actress explained why it is important for the journalist to acknowledge that her remarks were racist.

The 40-year-old actress weighed in on Alexi's case when sitting down with NBC News NOW for a special titled "The Racism Virus". Speaking to Vicky Nguyen, she began by stating, "I think it's important for people to hear her say that these were racist comments and there's nothing excusable about."

In the interview that was set to air on Wednesday night, March 10, the "X-Men: Apocalypse" actress went on to point out the reason why, "I think that for myself and other people in our community, it would just be nice for her to just say exactly what it is." She added, "Call it what it is, it was, it was a racist stupid remark."

Addressing the problematic tweets themselves, Olivia admitted that her past experience as victim of racism made them "hard to read". She elaborated, "I remember growing up and having people tease me for my mom's Asian eyes, for my Asian eyes and it's a triggering thing to read."

Though so, the actress portraying Monica Reed on "The Rook" believed Alexi "should be judged more on how she's taking the responsibility today." On the reason why, she explained, "We've all said silly things and she was 17 at the time. So, I definitely think there is, you know, a lot that we have to kind of give her some grace on for that."

Alexi was announced as Teen Vogue's newest editor in chief on Friday, March 5. Soon after the appointment, the 27-year-old's past tweets, in which she made comments about "swollen, asian eyes" and being "outdone by Asian" among others, resurfaced. On Monday, the magazine's staff issued a statement condemning her tweets.

"We've heard the concerns of our readers, and we stand with you. In a moment of historically high anti-Asian violence and amid the on-going struggles of the LGBT community, we as the staff of Teen Vogue fully reject those sentiments," part of their statement read. "We are hopeful that an internal conversation will prove fruitful in maintaining the integrity granted to us by our audience." 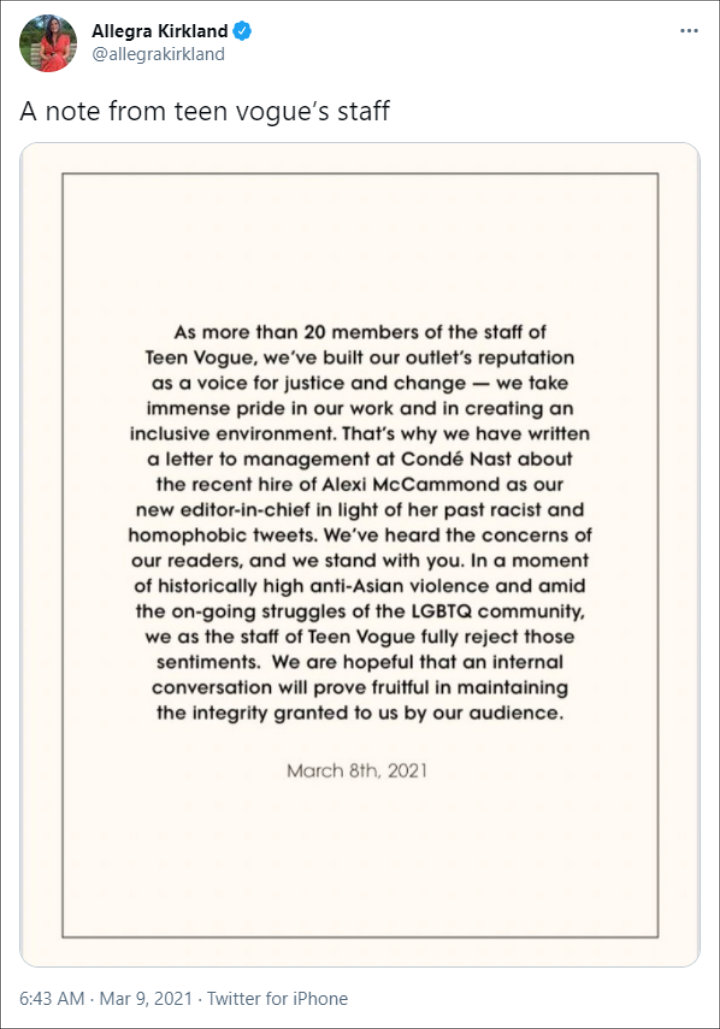 The New York Times reported that Alexi has since sent an apologetic note to the staff. "You've seen some offensive, idiotic tweets from when I was a teenager that perpetuated harmful and racist stereotypes about Asian Americans," her message read. "I apologized for them years ago, but I want to be clear today: I apologize deeply to all of you for the pain this has caused. There's no excuse for language like that."

On Tuesday, March 9, Teen Vogue issued another statement addressing the matter. Signed by Teen Vogue staff & EIC Alexi McCammond, it read, "We're so proud of the brand we've built and we're confident that Teen Vogue will continue to be a leader uplifting all BIPOC and marginalized communities and telling their stories to the world."

"As a team, we've had frank, thoughtful, and real conversations over the last days about inclusivity and the way forward," its statement continued. "Those will only continue as we grow from here. We're excited to get to work together and we can't wait for you to see what we accomplish as a team."