Having been one of the 13 people followed by the country's president on the microblogging site, the 'Bring the Funny' judge lightheartedly pleaded with him to let her flourish as herself.

AceShowbiz - Chrissy Teigen's pleading request has reached Joe Biden fairly quickly. Just hours after she kindly asked the president's POTUS Twitter account to unfollow hers, the "Bring the Funny" judge shared with her social media followers that it has been granted, and celebrated the moment by posting an expletive post.

The 35-year-old wife of singer John Legend took to Twitter on Tuesday, February 23 to express her relief. She exclaimed, "b***h f**k s**t suck the d I am FREE!!!!!!!!!!!!" Having found her explicit remark went viral, she turned to Instagram Story to send out a screenshot of an article about her swear words and underlined them.

A few hours before that, Chrissy made a plea to the POTUS on the microblogging site to let her flourish as herself. "I have tweeted a handful of times since my treasured @POTUS following. In order for me to flourish as me, I must ask you to please lord unfollow me," she begged. "I love you!!! It's not you it's me!!!

The "Chrissy's Court" star was among 13 people to be followed by @POTUS account and the only person in the short list who is not affiliated with the White House. On how she made it into the list, she first jokingly asked for a follow on the morning of inauguration day, January 20.

Chrissy tweeted at that time, "hello @joebiden I have been blocked by the president for four years can I get a follow plz." Less than 24 hours later, her request was accepted, prompting her to gush in disbelief, "OH MY GOD !!!!!!!!!!" She further raved in the following post, "my heart oh my god lmao I can finally see the president's tweets and they probably won't be unhinged." 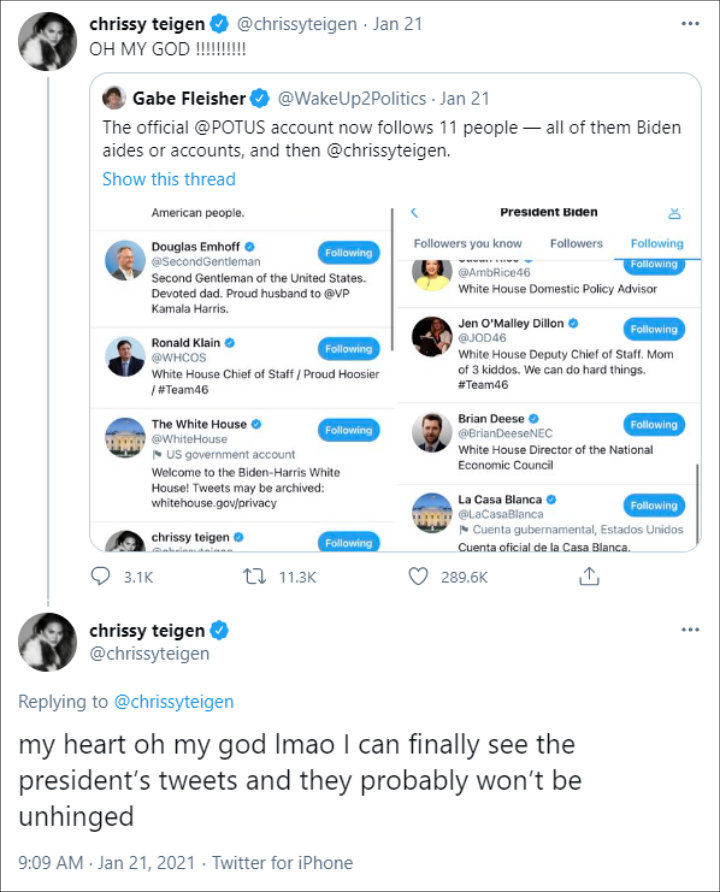 Chrissy and her husband John have been vocal with their support for Joe and Vice President Kamala Harris. Before the inauguration day, she bid farewell to Donald Trump by penning, "Today our great national f**kup is over, but the shame will last forever. with 2 impeachments, the creation of 3 million LESS jobs, 403,000 dead, a record low approval rating and god knows how many crimes, we can officially say Donald J Trump is the greatest at being the f**king worst."

"Maybe it wasn't such a good idea to have the guy with barely enough well done steak with ketchup fueled brainpower to power a lightbulb who doesn't even know how to close an umbrella run the country," she continued arguing. "History will not be kind to you, you absolute psychopath. But I never was anyhow."