The former Secretary of State shades the Texas senator after a journalist caught a glimpse of Cruz's poodle Snowflake staring out the front door of his home.

AceShowbiz - Hillary Clinton has taken a subliminal shot at Ted Cruz following his controversial trip to Cancun. The former Secretary of State slammed the Texas senator after reports emerged that he seemed to have left his dog at his freezing home while he fled to Mexico.

Making use of her Twitter account, the wife of former President Bill Clinton appeared to weigh in on Cruz's unflattering act. "Don't vote for anyone you wouldn't trust with your dog," she tweeted on Friday, February 19 without mentioning a name.

Hillary Clinton slammed Ted Cruz for leaving his dog behind during his Cancun trip.

While Mrs. Clinton did not make a direct reference to Cruz, her tweet came after someone caught a glimpse of the Republican senator's poodle Snowflake inside his Texas home during his Cancun fiasco. A journalist named Michael Hardy shared on Twitter a picture of the dog staring longingly out the front door of Cruz's home.

"Just drove by Ted Cruz's house in Houston. His lights are off but a neighbor told me the block got its power back last night. Also, Ted appears to have left behind the family poodle," he wrote along with the photo, before clarifying, "this was taken around 1pm central on Thursday. It's possible Ted brought the poodle back from Cancun with him, or that a family member was staying behind to take care of the dog." 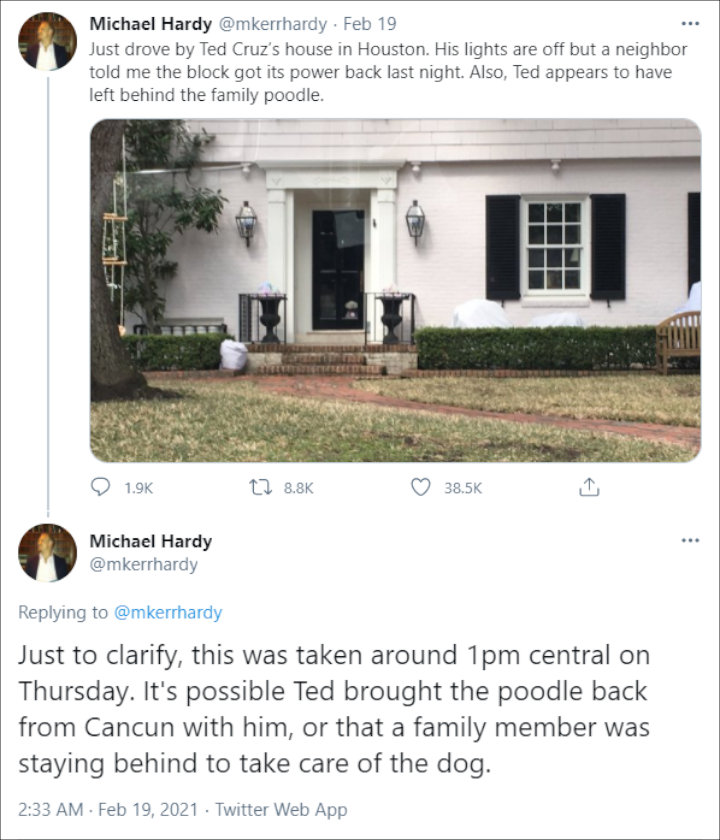 Journalist Michael Hardy tweeted out a photo of Cruz's dog Snowflake at his Texas home.

The Houston-based journalist noted though that Cruz was reported to initially have planned to stay in Mexico until Saturday. "When Ted Cruz left for Mexico the power was out," he added. "His wife Heidi texted a friend it was freezing. While he was gone the power came back. So Snowflake was in the cold for part of a day, but it could well have been longer. Ted left a security guard to take care of Snowflake."

Cruz came under fire after he was spotted departing from Bush Intercontinental Airport on Wednesday while his state was in the middle of power crisis due to winter storm. Following the backlash, he said in a statement that he was flying to Mexico only to accompany his daughters on a trip with their friends and that he was planning to return the next day.

"With school cancelled for the week, our girls asked to take a trip with friends. Wanting to be a good dad, I flew down with them last night and am flying back this afternoon," he claimed. "My staff and I are in constant communication with state and local leaders to get to the bottom of what happened in Texas. We want our power back, our water on, and our homes warm. My team and I will continue using all our resources to keep Texans informed and safe."

Hillary Clinton Reacts to Harvey Weinstein's Guilty Verdict: 'It Really Speaks for Itself'