Days after she landed in ICU for nearly losing her leg, Ashley shares raw pictures taken during the 'grueling' mission to bring her to safety, and explains why she is 'weeping in gratitude.'

AceShowbiz - Debra Messing could not be more amazed by the people who have helped rescue Ashley Judd in the Democratic Republic of the Congo. Shortly after the "Double Jeopardy" star opened up more about her grueling 55-hour journey out of the rainforest to get treatment for her serious leg injury, the "Will & Grace" actress responded by describing the mission as the "best of humanity."

"Ashley God was with you, and what a miracle. Your brethren gathering, planning, carrying your broken body, it is the best of humanity," wrote Debra in the comment section of Ashley's Instagram post. The Tuesday, February 16 post itself displayed raw pictures of Ashley and her rescuers which were taken during the "grueling" mission to bring her to safety.

"I cannot imagine the excruciating pain, the fear, the trauma you have experienced," the ex-wife of actor Daniel Zelman continued sharing her thought on the matter. "I am just so grateful to every person who helped bring you to medical attention. Please know you are in my thoughts and pray for full and gentle recovery." 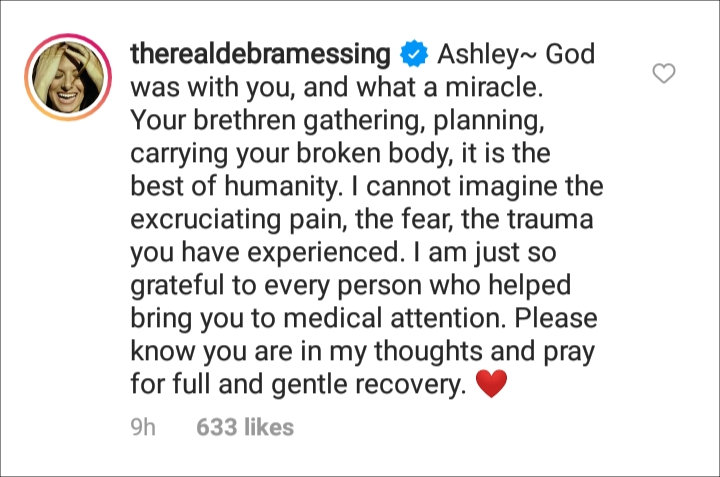 Debra's appreciative comment came when Ashley expressed her gratitude for the locals who helped her after she shattered her leg in a fall. "Friends. Without my Congolese brothers and sisters, my internal bleeding would have likely killed me, and I would have lost my leg. I wake up weeping in gratitude, deeply moved by each person who contributed something life giving and spirit salving during my grueling 55 hour odyssey," she began her lengthy message.

"Here are some of their stories. Dieumerci stretched out his leg and put it under my grossly misshapen left leg to try to keep it still," the daughter of singer Naomi Judd further detailed. "It was broken in four places and had nerve damage. Dieumerci ('Thanks be to God') remained seated, without fidgeting or flinching, for 5 hours on the rain forest floor. He was with me in my primal pain. He was my witness."

The Natalie Prior of "Divergent" then mentioned another man called Papa Jean, who found her five hours after she fell down. She said that the man did "adjust [her] broken bones back into something like a position [she] could be transported in." She additionally deemed other six men "hero" who "carefully moved [her] into the hammock with as little jostling as possible, who then walked for 3 hours over rough terrain carrying [her] out."

"Didier and Maradona: Didier drove the motorbike. I sat facing backwards, his back my backrest. When I would begin to slump, to pass out, he would call to me to re-set my position to lean on him," she went on explaining. "Maradona rode on the very back of the motorbike, i faced him. He held my broken leg under the heel and I held the shattered top part together with my two hands. Together we did this for 6 hours."

Ashley concluded her message by showing her appreciation for the women who "held" her during the rescue. "The women! My sisters who held me. They blessed me," she raved.

Four days earlier, Ashley revealed that she has been hospitalized in South Africa after breaking her leg and suffering "catastrophic injuries" during her conservation trip. She also divulged that she went there to help protect endangered great apes called bonobos.