The 'Will and Grace' star finds herself roasted online for sharing an image of the POTUS holding a Bible next to a doctored image of the Nazi leader in similar post with a caption that read, 'This is no accident!'

AceShowbiz - Debra Messing is standing by her criticized tweet comparing Donald Trump to Adolf Hitler. Hours after finding herself being slammed online for sharing the photoshopped image on social media, the Grace Adler of "Will & Grace" offered an argument why the POTUS is no different from an authoritarian dictator.

On Tuesday, June 2, the 51-year-old actress turned to Twitter to put out a side-by-side photo of Trump holding a Bible and Hitler holding a book. The caption of the image read, "This is no accident!" Along with the picture, she told her followers that the 45th President was sending "a dog whistle to white nationalists and Nazis" with his "photo op" at St. John's Church. 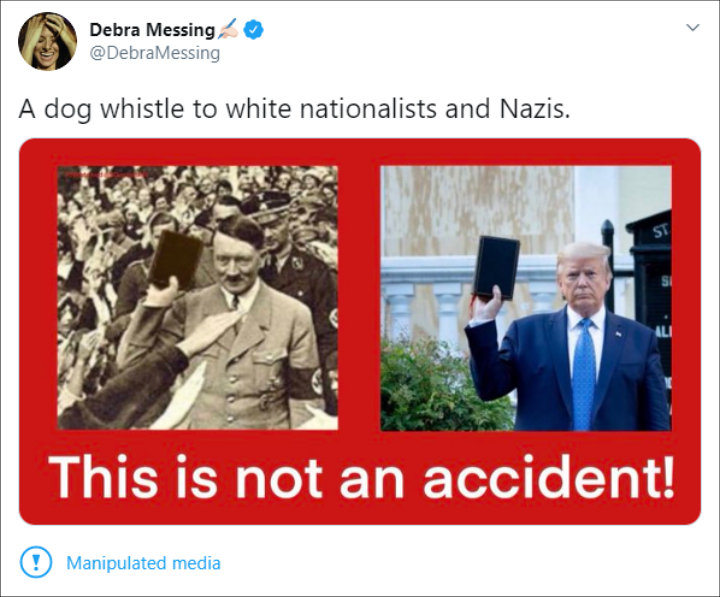 Many were quick to point out that the Hitler's image has been doctored and the original picture captured the Nazi leader raised an empty hand. BuzzFeed News media editor Craig Silverman, in particular, informed the ex-wife of Daniel Zelman, "Please check stuff before you spread it. The Hitler photo is fake."

Silverman's correction prompted Messing to reply, "Thank you Craig for informing me, I hadn't known it was photoshopped." Nevertheless, "The Wedding Date" actress insisted, "I still stand, however, by the comparison of Trump to an authoritarian dictator."

"He did threaten to turn our military against our citizens. He used police might, horses,& teargas on peaceful protesters," she went on reasoning. "Citizens protesting systemic violence against black ppl by police. Trump wants them 'Dominated.' That says it all." 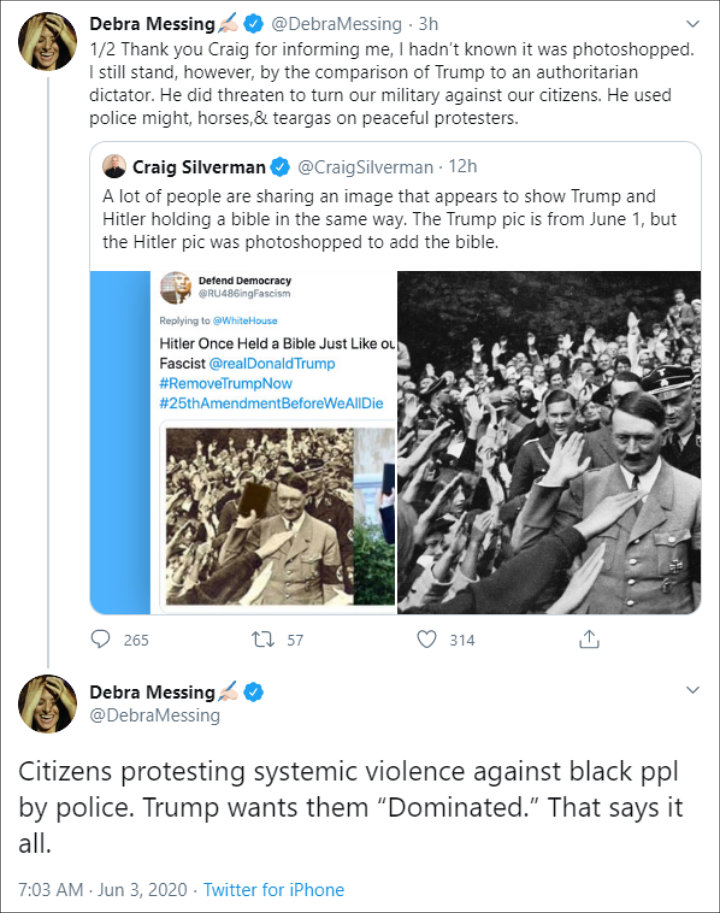 Others, in the meantime, were not as kind as Silverman in telling Messing about the fake photo. Radio host Larry O'Conner tweeted, "Except when the Hitler photo is FAKE it ends up being a dog whistle for desperate, hateful people with no moral compass, like you. Every time you do things like this you lose more and more support. Just. Stop." 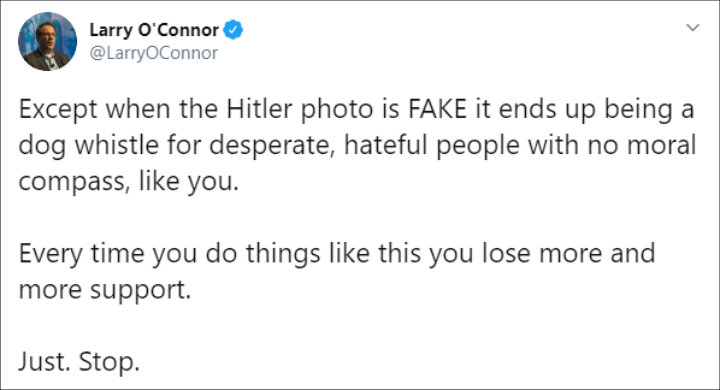 Another radio host Neal Boortz shared similar sentiment as he blasted Messing, "You DO realize the Hitler photo is a fake, don't you? It was photo-shopped you mindless twit." Ted Cruz, a Republican Senator for Texas, additionally pointed out at the absurdity of the fake photo, "Hollywood elites: anyone holding a Bible is Hitler! This is idiocy." 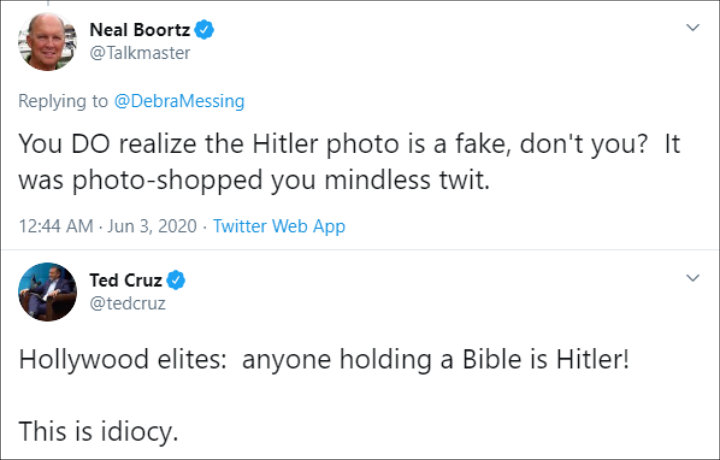 Trump himself has drawn criticism for his Monday, June 1 visit to St. John's Church. After law enforcement cleared his path from peaceful protesters using tear gas and shields, the President posed for the cameras with a bible in his hand in front of the church, which is located across Lafayette Square from the White House.

Bishop Mariann Edgar Budde of the Episcopal Diocese of Washington later condemned the President's action. Speaking to CNN's Anderson Cooper, she stated, "Let me be clear: The President just used a Bible, the most sacred text of the Judeo-Christian tradition, and one of the churches of my diocese, without permission, as a backdrop for a message antithetical to the teachings of Jesus."

"I am outraged. The President did not pray when he came to St. John's, nor as you just articulated, did he acknowledge the agony of our country right now," she further added. "We align ourselves with those seeking justice for the death of George Floyd and countless others. And I just can't believe what my eyes have seen."