The songwriter of 'Cover Me Up' makes the announcement days after branding the disgraced country star's behavior in using the N-word following a night out as 'disgusting and horrifying'.

Singer/songwriter Jason Isbell has pledged to donate his royalties from disgraced country star Morgan Wallen's new album to the NAACP in the wake of his racial slur controversy.

Wallen's rising career has been in freefall ever since he was caught on camera using the N-word following a night out with friends on January 31.

He quickly apologized, but the scandal prompted his record label bosses to suspend Wallen's contract, while officials at over 400 radio stations pledged not to play his music, even though "Dangerous: The Double Album" remains atop America's Billboard 200 for its fourth consecutive week.

One of the tracks featured on Dangerous is a cover of an Isbell tune, titled "Cover Me Up", and the alternative country musician has since decided to send his portion of the proceeds to civil rights organization, the National Association for the Advancement of Colored People (NAACP).

Isbell shared the update with fans on Twitter as he reposted an article from the Associated Press about Wallen's continued chart success in spite of the racial slur uproar, and explained, "So... A portion of this money goes to me, since I wrote 'Cover Me Up.' I've decided to donate everything I've made so far from this album to the Nashville chapter of the @NAACP."

He then added sarcastically, "Thanks for helping out a good cause, folks." 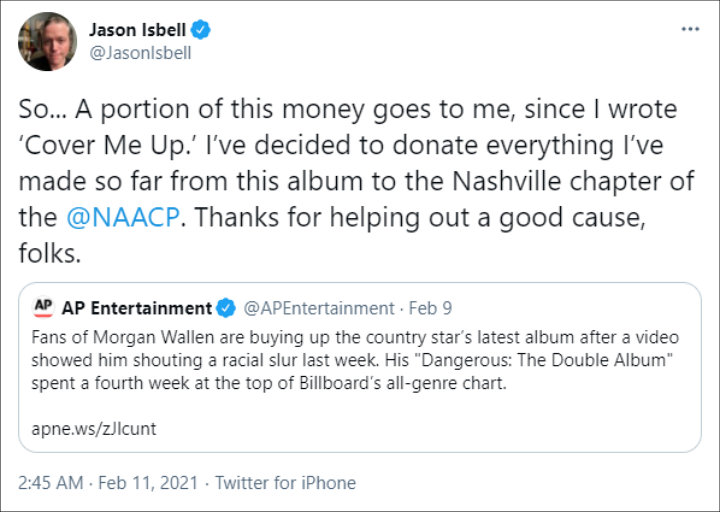 Jason Isbell revealed plans for royalties he got from Morgan Wallen's new album.

Isbell was among Wallen's peers who chastised the singer for his ignorant use of the N-word after the news hit headlines.

He tweeted at the time, "Wallen's behavior is disgusting and horrifying. I think this is an opportunity for the country music industry to give that spot to somebody who deserves it, and there are lots of Black artists who deserve it." 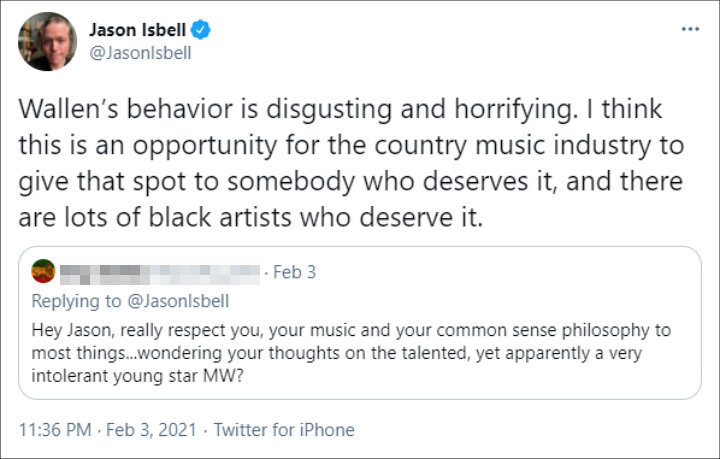 Jason Isbell slammed Morgan Wallen in the wake of his racial slur controversy.

Wallen has yet to comment on the continued backlash following his initial apology.