The 25-year-old YouTuber and makeup artist faces accusation of alleged 'predatory' behavior after publicly flirting with the teen TikTok star, who just turned 18 on January 14.

AceShowbiz - Nikita Dragun has responded to criticism of her flirty interaction with a much younger fellow social media personality, Alejandro Rosario. The Belgian-born American YouTube star has faced accusations of preying on the TikTok star, who is 7 years her junior.

Setting the record straight, Nikita claimed that her relationship with Alejandro is purely platonic. In a video posted on TikTok, the 25-year-old makeup artist danced with her rumored love interest while a song which lyrics go, "Why does everybody think we f**k?", played in the background.

In the comment section of the video, a follower further accused her of waiting Alejandro to turn 18, which is the legal age of consent in California. "You was just waiting for him to turn 18," the critic wrote. Nikita then clapped back, "You don't need to create a false narrative just to get likes on your comment. We are just friends." 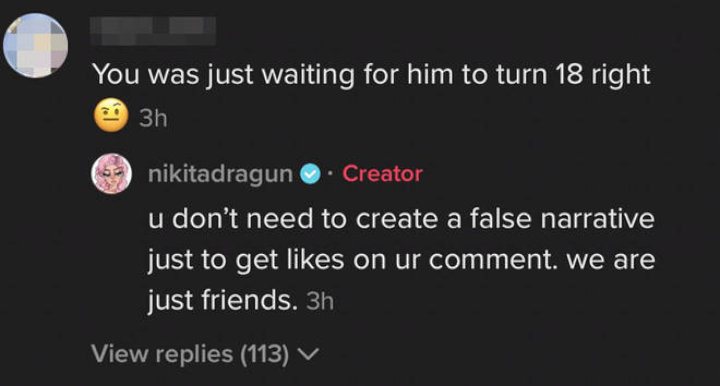 Alejandro backed up Nikita's claims by posting a video on his own TikTok account which featured him with his female pal. He captioned it, "We're literally just friends btw before you all assume," before deleting the post for an unknown reason.

Nikita came under fire after she publicly flirted with Alejandro, who has gained 5.5 million followers on the video-sharing platform. The beauty vlogger was caught commenting on one of Alejandro's photos, "u 18 now right ? …asking for a friend."

From then on their flirty interaction goes on, with Nikita and Alejandro leaving comment beneath each other's photos. The YouTuber later invited Alejandro to her star-studded birthday party when she turned 25 on January 31.

She has been sharing her selfies with him on Instagram Stories and was also seen dining with the teen star in Los Angeles, sparking rumors that they could be an item. There were, however, some people who think that the 7-year-old gap between them is a little bit inappropriate and found her behavior to be "predatory."

"A 25 yr old has no buisness being with an 18 yr old. It's just weird," one person commented on Nikita and Alejandro's relationship. "Nikita Dragun is 25 years old asking a child are they 18 yet. on a public platform. that's a predator!"

"It's like she's been counting down the days until he's of legal age. This is weird and it's giving pedo...," another claimed. Someone else similarly accused her, "nikita dragun is weird as f**k for making all these videos and comments about a boy who literally just turned 18."

Someone else didn't buy her "just friends" claims. "even if you are 'friends' what the f**k does your old a** at the big ass age of 25 have in common with a boy who is graduating highschool this year. she's a weirdo," the said person slammed Nikita.

This is Nikita Dragun's Response to Saweetie Shading Her