Through an article piece published on February 1, the 'I Left My Heart in San Francisco' crooner uncovers that he had been officially diagnosed with the disease in 2016.

AceShowbiz - Tony Bennett has revealed his battle with Alzheimer's Disease in a magazine article.

The legendary crooner shared the news via a piece with magazine AARP magazine on Monday, February 1, revealing he had been officially diagnosed with the disease in 2016. Alzheimer's is characterized by a progressive memory loss that deprives its sufferers of speech, understanding, memories, and recognition of their loved ones.

"Life is a gift - even with Alzheimer's. Thank you to (his wife) Susan and my family for their support, and AARP," he tweeted. "The Magazine for telling my story." 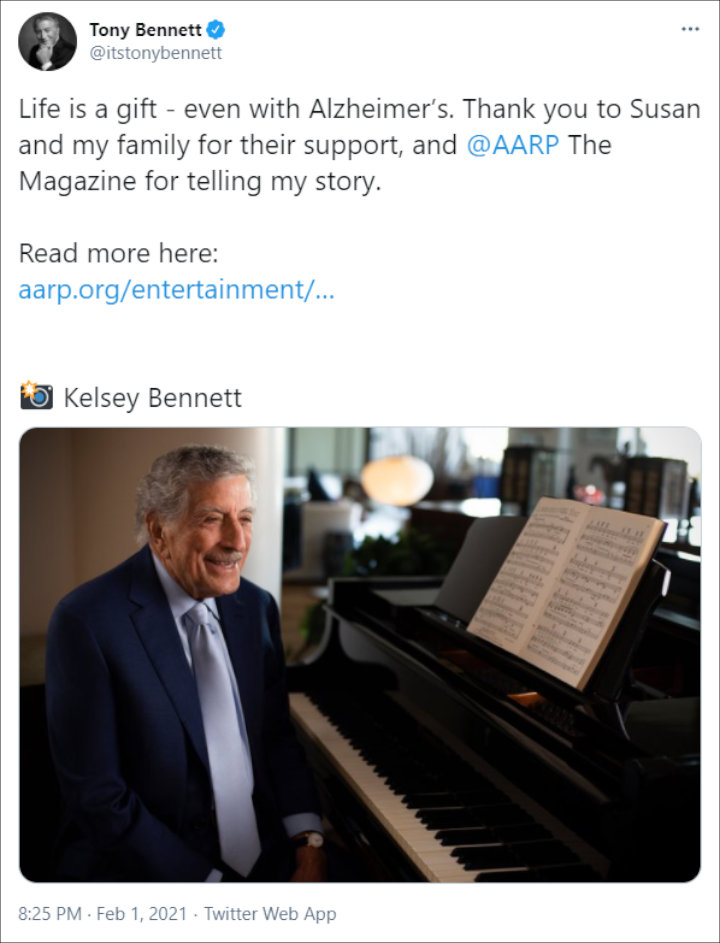 Tony Bennett thanked his wife and family for support after Alzheimer's disease revelation.

His wife Susan explains in the article, written by John Colapinto, that Tony is "not always sure where he is or what is happening around him."

Despite his diagnosis five years ago, the 94-year-old has continued to enjoy great success in his musical career, including the release of his chart-topping duets album with Lady GaGa, "Cheek to Cheek" with a follow-up due in the Spring.

The piece references documentary footage of the pair, that suggests the "Poker Face" singer was aware of his diagnosis throughout their time recording and touring together.

"He speaks rarely, and when he does his words are halting; at times, he seems lost and bewildered. GaGa, clearly aware of his condition, keeps her utterances short and simple (as is recommended by experts in the disease when talking to Alzheimer's patients)."

"You sound so good, Tony," she tells him at one point. ‘Thanks,' is his one-word response."

Tony has been encouraged by his neurologist to continue singing and performing for as long as he can.

"Both Susan and (his son and manager) Danny said that backstage, Tony could seem utterly mystified about his whereabouts. But the moment he heard the announcer's voice boom 'Ladies and gentlemen - Tony Bennett!' he would transform himself into performance mode, stride out into the spotlight, smiling and acknowledging the audience's applause," it reads.

The report adds Tony's team of neurologists have found his twice-a-week singing sessions - when he and longtime pianist Lee Musiker run through his full 90-minute set - are stimulating his brain in positive ways, despite the progressive state of his Alzheimer's.