The 'Blurred Lines' music video star explains how her pregnancy is changing her face and body after online trolls speculate that she recently had a cosmetic procedure.

AceShowbiz - Emily Ratajkowski is adamant she has never got any lip injections. In an attempt to put a stop to rumors about her having the cosmetic procedure done, the model known for her portrayal of Andie Hardy in "Gone Girl" cited pregnancy as the reason for her "puffy" lips.

"For anyone saying 'you need to stop w/ the lip injections': I've never had lip injections (no judging folks who do-y'all look great!) but you can't even get injection when you're pregnant," the 29-year-old expectant mom clarified on Instagram Story on Friday, January 22. "A woman's blood volume increases 50% which is why ladies can get a little puffy in the face and lips during pregnancy."

Emily went on to fire back at trolls who said, "you've been pregnant forever." In her argument, she pointed out, "LOL yes pregnancy lasts for 40 weeks which can definitely feel like a long time, but I announced halfway into my pregnancy and it's only been three months since then! Actually it's weirdly gone by very quickly to me."

The star of Robin Thicke's "Blurred Lines" music video concluded her lengthy message by talking about embracing how her body changes during pregnancy. "It's [pretty] weird to have your body change so much in a matter of months but I've found I have a whole new appreciation for what my body can do and what is beautiful," she said, "and I'm gonna celebrate it here when I feel like it." 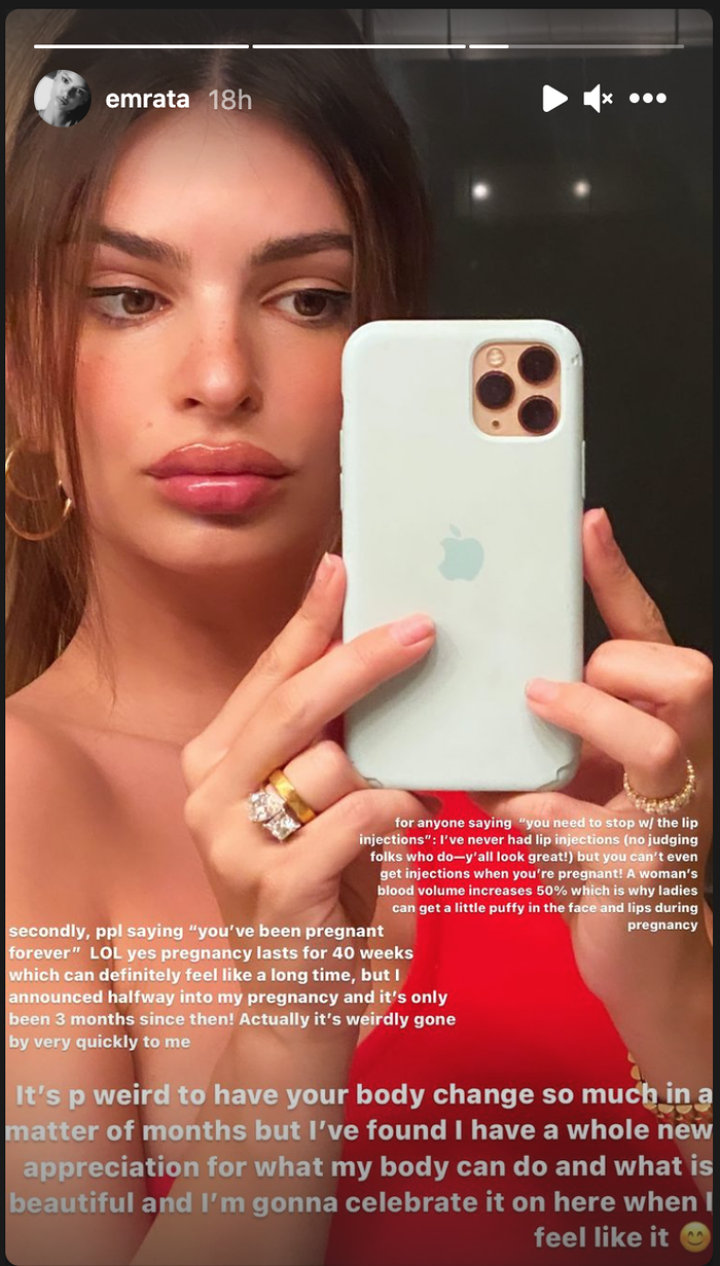 Emily Ratajkowski shut down rumors about her getting lip injections.

Emily went public with her pregnancy back in October 2020. In an essay for Vogue, she claimed that she and husband Sebastian Bear-McClard will not spill the baby's gender. "When my husband and I tell friends that I'm pregnant, their first question after 'Congratulations' is almost always 'Do you know what you want?' " she began sharing her thoughts on the matter.

"We like to respond that we won't know the gender until our child is 18 and that they'll let us know then," she went on. "Everyone laughs at this. There is a truth to our line, though, one that hints at possibilities that are much more complex than whatever genitalia our child might be born with: the truth that we ultimately have no idea who - rather than what - is growing inside my belly."

Emily Ratajkowski Grossed Out by Resurfaced Sexist Interview About Her