Bradford Cohen, an attorney for both the 'Lollipop' rapper and the 'Zeze' MC, praises the pardons as 'a perfect example of Trump's administration following up on its reforms and commitments.'

AceShowbiz - Lil Wayne and Kodak Black have been granted pardons by U.S. president Donald Trump in his last full day in office.

Wayne, real name Dwayne Carter, received a full pardon on the federal weapons charge he pled guilty to last year (20), while Black, real name Bill Kapri, received a commutation after being charged with falsifying information on federal forms to buy firearms in 2019.

"President Trump and his administration have been tireless advocates on behalf of the African-American community," Bradford Cohen, attorney for both rappers, told Rolling Stone in a statement. "These pardons are a perfect example of this administration following up on its reforms and commitments."

The pardons were granted on Tuesday night (January 19) - Trump's final full day in the White House before Joe Biden takes over as POTUS.

Wayne, who had been due to appear in court on January 28 on charges relating to his firearms offence, hit headlines last October when he met up with Trump ahead of the presidential election.

Alongside a picture of himself with Trump, Wayne wrote, "Just had a great meeting with (Trump) besides what he's done so far with criminal reform, the platinum plan is going to give the community real ownership. He listened to what we had to say today and assured he will and can get it done." 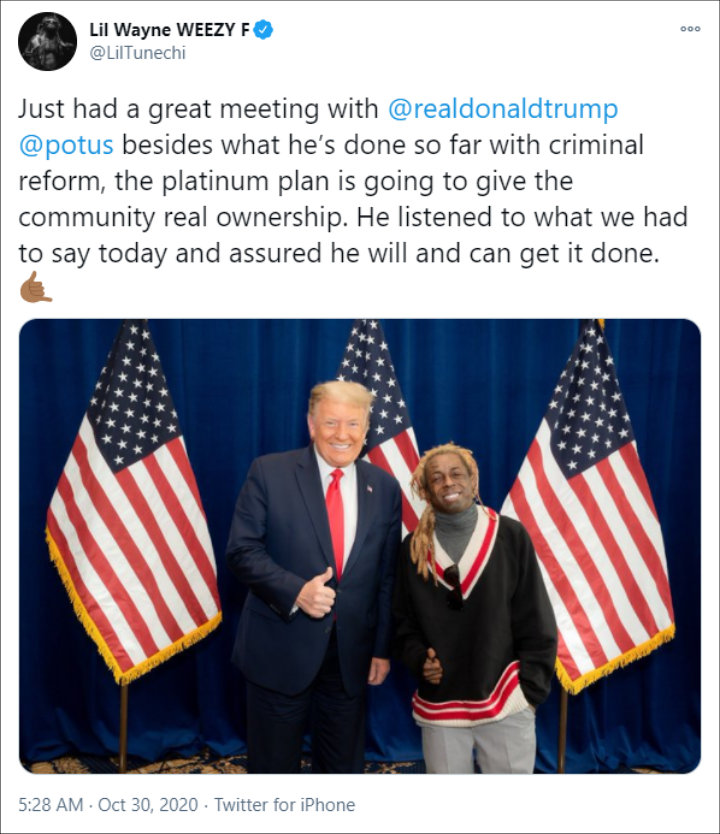 Lil Wayne boasted over great meeting with Donald Trump ahead of 2020 election.

However, the image sparked a backlash from many of Wayne's anti-Trump followers.

Meanwhile, Black, who is currently behind bars after being sentenced to 46 months in prison on the federal weapons charges, tweeted that he would donate $1 million (£800,000) to charity if Trump released him from prison early.

It has yet to be announced whether or not "Tiger King: Murder, Mayhem and Madness" star Joe Exotic is also on the list of Trump's last-minute presidential pardons.

Lil Wayne Expected to Be Pardoned by Trump Before Leaving Office