The Merc with the Mouth depicter has a 'full disclosure' moment after Marvel Studios chief Kevin Feige confirms that the 'Deadpool 2' sequel will be part of MCU and rated R.

AceShowbiz - Ryan Reynolds has spoken up after "Deadpool 3" is confirmed to be part of Marvel Cinematic Universe and have a R-rating. Deciding to get honest, the Canadian actor has admitted that he pulled some tricks in order to get Disney's bosses greenlight the threequel.

In his true sarcastic and comedic fashion, the Merc with the Mouth depicter joked on Twitter on Monday, January 11 that in order to get approval for "Deadpool 3", "I showed them Spiderman 1 & 2 and told them it was Deadpool 1 & 2." 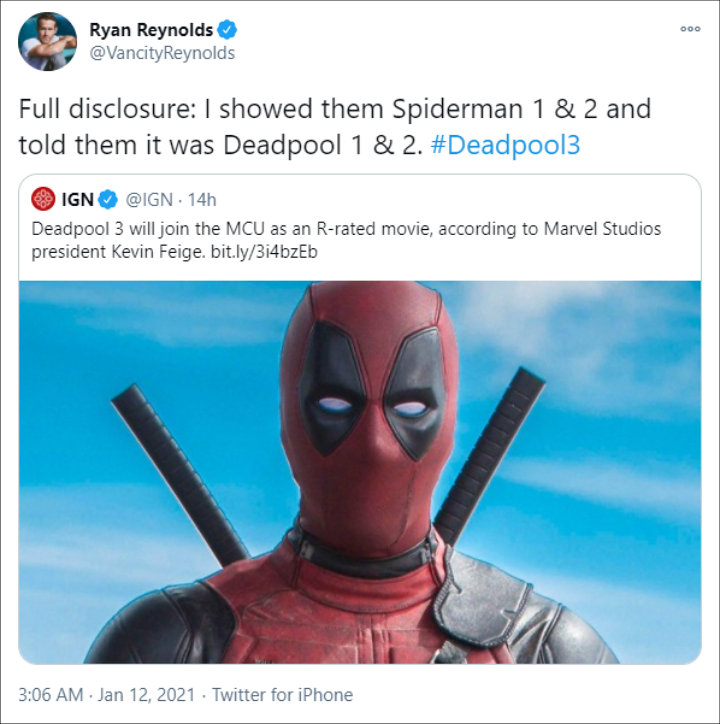 Ryan Reynolds joked about getting Disney's approval for 'Deadpool 3' R-rating.

Reynolds also took to Instagram to respond to the news of "Deadpool 3" update. Revealing his idea for the upcoming movie's storyline, he jokingly pitched a crossover with a beloved character of Disney's classic children's animation, Bambi, as he posted, "First order of business: Find the guy who killed Bambi's mom."

Feige answered fans' long-burning question about "Deadpool 3" rating during an interview with Collider's Steve Weintraub. "It will be rated R and we are working on a script right now, and Ryan's overseeing a script right now," he said.

Revealing that sisters Lizzie Molyneux-Loeglin and Wendy Molyneux are currently writing the script, he went on sharing, "It will not be [filming] this year. Ryan is a very busy, very successful actor. We've got a number of things we've already announced that we now have to make, but it's exciting for it to have begun. Again, a very different type of character in the MCU, and Ryan is a force of nature, which is just awesome to see him bring that character to life."

Disney's Bob Iger previously committed to keep the adult humor nature of "Deadpool" while talking with investors. "['Deadpool'] clearly has been and will be Marvel branded. But we think there might be an opportunity for a Marvel-R brand for something like 'Deadpool'. As long as we let the audiences know what's coming, we think we can manage that fine," he promised.