The 'Keeping Up with the Kardashians' star celebrates the taping of the final episode of the reality series by having a drink with the crew in her backyard.

AceShowbiz - It's officially a wrap for "Keeping Up with the Kardashians". Having taped the final episode of her family's long-running hit reality series, Kim Kardashian took fans to her backyard for a final toast to the years she and her family shared their lives with the public.

On Friday, January 8, the official Instagram of "KUWTK" shared a clip that saw its 40-year-old star enjoying a drink with the filming crew in her backyard. "Hey guys, we just finished filming for ever, like for ever ever," she greeted the series' fans. "We're done, we're never filming again. Isn't that so crazy?"

She went on, "So we're having a drink with the crew, in my backyard, hanging out, cheers to... I don't know, 15 years, 20 seasons of craziness and lots of love." In the caption of the video, it is written, "20 Seasons. 14 years. Bible, we can't believe today is the last day of filming for #KUWTK. Final season coming soon to E!"

Many of "KUWTK" fans were saddened that the show is coming to its end. One claimed, "i'm crying real tears rn." Another noted, "I'm going to miss it so much, only thing that helped me through isolation." A third chimed in, "im literally not ready for this. I can't believe the last season is coming. I’m going to cry."

Hours prior, Kim turned to her own Instagram Story account to share footage from the last day of filming. "You guys, this is our last 'Keeping Up with the Kardashians' mic-ing," she said. When one of the crews was heard saying "I'm gonna cry," the TV personality was quick to reply, "Don't cry, don't cry."

Kim also shared clips from her and her family's outdoor party which showed a table with floral arrangements. She also showed some edible cookies with the family members' faces on it which were put on the plates. In another post, she wrote, "It's a wrap! Not on the tears or the drinks tho." 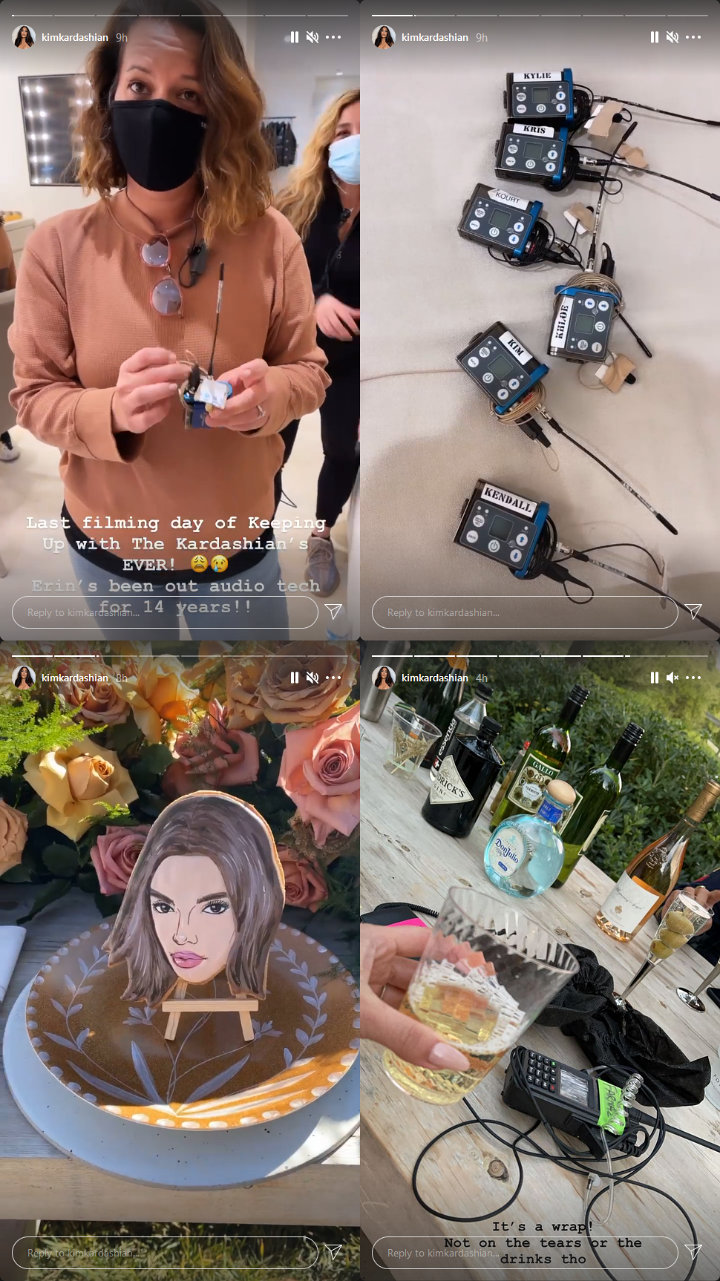 Kim announced the end of "KUWTK" via Instagram back in September 2020. "It is with heavy hearts that we've made the difficult decision as a family to say goodbye to 'Keeping Up With the Kardashians," she declared at that time.

"After what will be 14 years, 20 seasons, hundreds of episodes and numerous spin-off shows, we are beyond grateful to all of you who've watched us for all of these years - through the good times, the bad times, the happiness, the tears, and the many relationships and children," she added. "We'll forever cherish the wonderful memories and countless people we've met along the way."

YouTuber Aaliyah Jay's Alleged Side Dude Threatens to Expose Her

Kourtney Says Everyone Originally Rejected 'Keeping Up with the Kardashians'