AceShowbiz - Azealia Banks is apparently still salty over Rihanna. The Bajan beauty was dissed by the "Anna Wintour" star after she showed off her new hairdo in a couple of new photos to ring in the New Year.

"New year's resolution: Apply the pressure," so the Fenty Beauty mogul wrote both on her Instagram and Twitter on New Year's Eve. She rocked a mullet and flaunted her curves in a slinky dress with a thigh-high slit while posing by a swimming pool.

Azealia was anything but subtle with her snark as she reposted RiRi's pictures on her Story with an unfavorable comment added. "The girls are literally under zero pressure with this beavis and butthead mullet sis," she scoffed, comparing RiRi to the MTV popular 1990s animated characters. 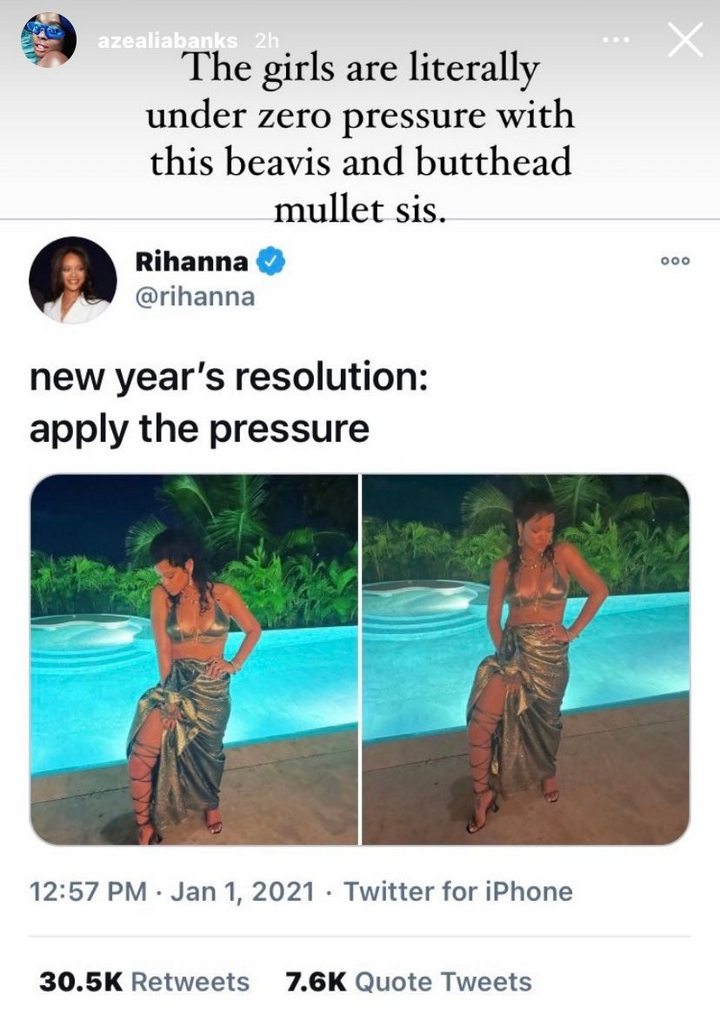 Before butting heads, Azealia Banks and Rihanna once collaborated for the latter's eighth studio album "Anti". Azealia was originally among the featured guests when the tracklist leaked, but when album finally came out in 2016, she was not in it.

Azealia released a clip of the song on the internet a few months later. But other than that, she and RiRi mostly stayed in their lanes until 2017 when President Donald Trump announced an executive order to ban immigrants from seven countries from entering the United States.

"Disgusted! The news is devastating! America is being ruined right before our eyes! What an immoral pig you have to be to implement such BS!!'" RiRi blasted the MAGA leader back then.

Azealia was quick to come to POTUS' defense, "As far as Rihanna (who isn't a citizen, and can't vote) and all the rest of the celebrities who are using their influence to stir the public, you lot really REALLY need to shut up and sit down. Stop chastising the president. It's stupid and pathetic to watch. All of these confused people confuse other confused people."

She even posted RiRi's phone number and encouraged her followers to "bomb away!"

In response, RiRi called Azealia a "weirdo" as she shared a screenshot of taunting text messages she supposedly received from Azealia. They read, "I don't have to do anything to you miss. Beyonce is already working heavy on you. Ever think to stop and think that's why you have a drug and sex addiction? Lol girlie. Best of luck." 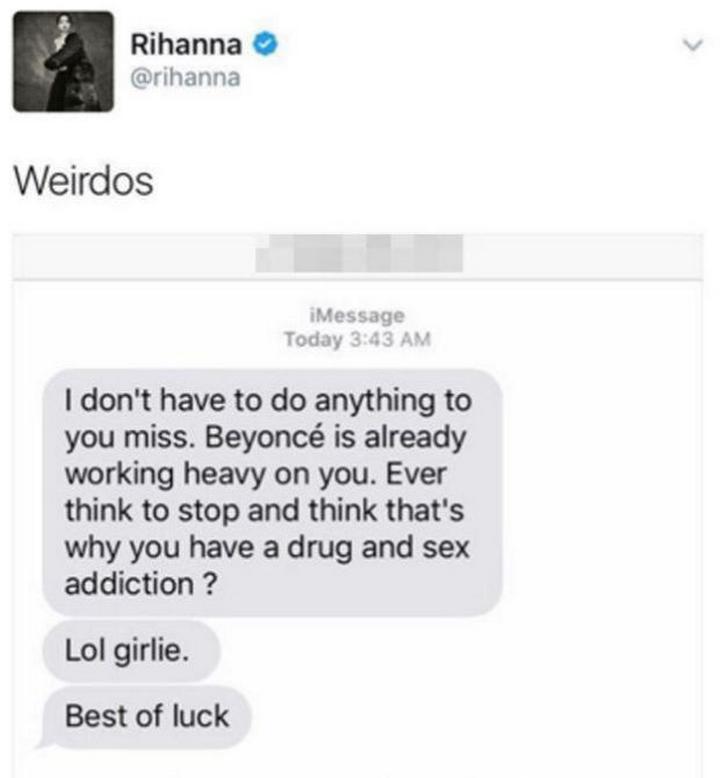 Things got nasty again in 2019 when Azealia criticized Rihanna's lingerie line over its body inclusivity. "We still want to be skinny Victoria's Secret angels. We do not want to be f**king fat Fenty savages," Azealia said in her typical unfiltered rant.

She even called RiRi a "bald bit*h" and "fat & edgeless," but RiRi was unbothered.