'Jeopardy!' Champion Ken Jennings Vows to Be Kinder When Owning Up to Past 'Insensitive' Tweets

Issuing an apology to the people who were offended by his bad tweets, the interim host of the game show admits he screwed up and explains that they worked as jokes in his head.

AceShowbiz - Ken Jennings has expressed regret for his past "insensitive" remarks. When owning up to his old problematic tweets, the 74-time champion of "Jeopardy!" offered a public apology and vowed that he will be kinder to others going forward.

The 46-year-old shared his thought via Twitter on Wednesday, December 30. He kicked off a series of tweets by writing, "Hey, I just wanted to own up to the fact that over the years on Twitter, I've definitely tweeted some unartful and insensitive things. Sometimes they worked as jokes in my head and I was dismayed to see how they read on screen."

"In the past, I'd usually leave bad tweets up just so they could be dunked on. At least that way they could lead to smart replies and even advocacy. Deleting them felt like whitewashing a mistake," he further admitted. "But I think that practice may have given the impression I stand by every failed joke I've ever posted here. Not at all!"

The game show star, who will replace late Alex Trebek's role as an interim host, went on to issue his apology. "Sometimes I said dumb things in a dumb way and I want to apologize to people who were (rightfully!) offended. It wasn't my intention to hurt anyone, but that doesn't matter: I screwed up, and I'm truly sorry," he pleaded.

Ken concluded his tweets by encouraging people to be "kinder" to each other. "If 2020 has taught us anything, it's that we should be kinder to one another. I look forward to heading into 2021 with that in mind," he pointed out. 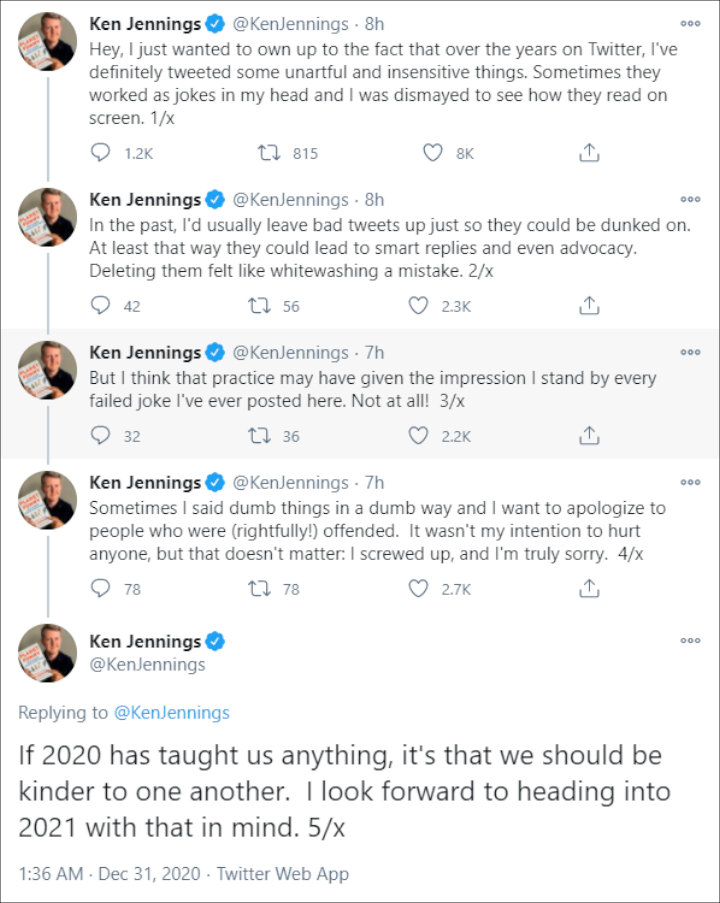 Ken Jennings apologized for his past 'insensitive' tweets.

One month earlier, Ken landed in hot water after his tweet from 2014 resurfaced. In late November, one Twitter user shared a screenshot of the tweet and noted, "You can delete the tweet but the internet never forgets." The offensive post itself read, "Nothing sadder than a hot person in a wheelchair."

Ken, however, had apologized for his "wheelchair" remark. "I never did a public flogging thing for this but I did apologize personally to angry/hurt people who reached out personally," he stated back in 2018. "it was a joke so inept that it meant something very different in my head & I regret the ableist plain reading of it!"