Madonna Blasts Mark Zuckerberg Over Instagram's New Privacy Policies: They Spy on You

Warning social media users of the photo-sharing platform's new rules, the Material Girl accuses the Facebook co-founder of stealing 'your most intimate secrets.'

AceShowbiz - Madonna got very upset at Mark Zuckerberg because of Instagram's new privacy policies. Upon learning that the photo-sharing platform has new rules which can possibly violate its users' private data, the "Material Girl" singer warned her followers that the Facebook co-founder might "spy on [them]."

"Starting tomorrow, Instagram's new cyber surveillance policies allow Mark Zuckerberg to spy on you and your family, steal your most intimate secrets and monitor your compliance with government mandates through all your devices - including your television - and sell your data to government and industry or punish you for disobedience," the 52-year-old said in a clip she shared Saturday, December 19. "This is some scary s**t."

Madonna was not the only one complaining over the December 20th update. Many people have taken to Twitter to express their concerns. One claimed, "You are consenting them to use your pictures and send them to anybody, you're allowing them to access your card payment details and allowing them to see what you've spent online, and they can now take legal action on you for posting something they don't like."

Another one pointed out that people can no longer use their personal url as their username. "Just popping something on here due to the new Instagram terms of service on the 20th Dec," the critic wrote. "If your username on Instagram is the same as your domain name then your account could be disabled. I confirmed this with Facebook business support. I know this will affect us bloggers!"

A third one additionally accused Instagram of discriminating sex workers since they will not permit sexually explicit or even implicit content. "remember to boycott instagram on december 20th bc the updated terms of service actively discriminate against sex workers! social media censorship and deplatforming during a global pandemic deprives users of alternative avenues of income, and by extension, is inherently violent," the tweet read.

Reacting to the backlash, Instagram offered some clarification via its official Twitter account. "We're seeing some confusion that our Terms of Use update is targeted at sex workers. We want to reassure our community that this isn't true, and nothing will change about the way we enforce our policies on 12/20. (1/2)," the first tweet noted. 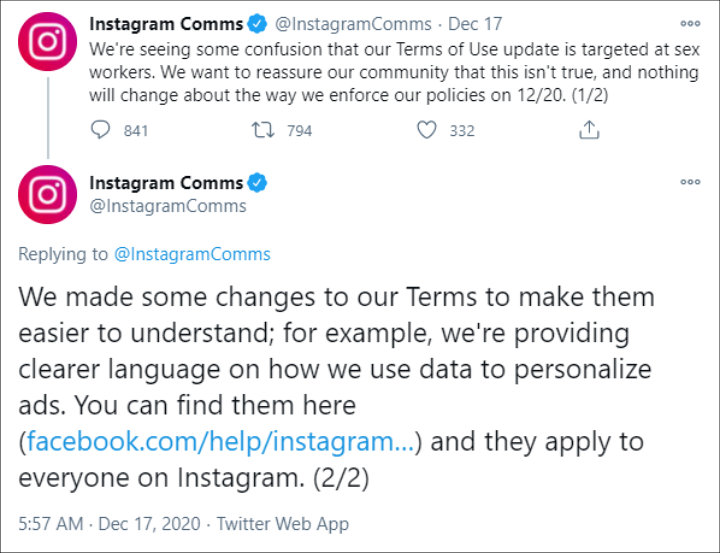 "We made some changes to our Terms to make them easier to understand; for example, we're providing clearer language on how we use data to personalize ads," it continued in a following tweet. "You can find them here (https://facebook.com/help/instagram/termsofuse) and they apply to everyone on Instagram. (2/2)."

Marvel May Pass the Baton to M'Baku in 'Black Panther' Sequel

Diablo Cody Has Finished Script for Madonna's Biopic Before Leaving