Joan cheers to the newly-engaged couple's 'happily ever after,' whereas Frankie declares, 'This is just the beginning of a long-lasting life filled with laughter and love.'

On Sunday, December 20, 52-year-old Joan took to Twitter to express her excitement at welcoming her future son-in-law. "I am so excited to welcome Dalton Gomez into our family! Ariana, I love you and Dalton so much!!!! Here's to happily ever after! YAY! xoxoxo," she tweeted.

Joan's message was echoed by her son Frankie. Making use of his own Twitter page, he raved, "I am so happy for my sister and so excited to (officially) welcome Dalton into the family! YAY! This is just the beginning of a long-lasting life filled with laughter & love. Ugh. I love you Ariana & Dalton! HAPPY ENGAGEMENT!" 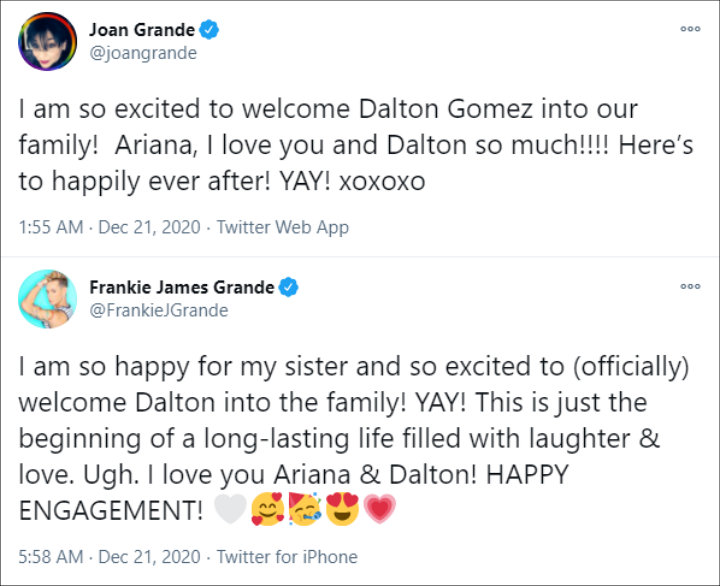 Joan and Frankie's posts came hours after Ariana announced on Instagram that she is engaged to her 25-year-old beau. Sharing a series of photos of her with her new fiance and the engagement ring, the "Thank You, Next" songstress declared, "Forever n then some (sic)."

On how Ariana felt regarding the engagement, a source told Us Weekly, "Ariana is beyond excited. She has really enjoyed getting to know and falling in love with Dalton out of the spotlight, something she didn't get to do in her past relationships." The source added, "They are so in love and committed to spend the rest of their lives together."

Ariana and Dalton were reported to have become an item in March 2020. She confirmed the relationship nearly two months later through his cameo in her homemade music video for "Stuck With U", her collaboration single with Justin Bieber. They went Instagram official in June after she put out on her eve of her birthday a photo and video of her being accompanied by the real estate agent.

This is Ariana's second engagement. The Grammy winner was previously engaged to comedian Pete Davidson in June 2018. The pair called it off in October the same year. Her other exes included rapper Big Sean, late rapper Mac Miller and dancer Ricky Alvarez.

Famous Dex Claps Back at People Worrying About His Alleged Drug Use Video: 'Suck My D**k!'

Ariana Grande Gets Bicycle for Two as Wedding Gift From PETA