Claiming she rooted for the 'Can't Fight the Moonlight' singer during her secret stint on the FOX series, the 'Real Housewives of Beverly Hills' star asks people to 'stop reading into s**t!'

AceShowbiz - Brandi Glanville has nothing against LeAnn Rimes. Having been accused of shading the "Can't Fight the Moonlight" singer with tweets during her secret stint on "The Masked Singer", "The Real Housewives of Beverly Hills" star was quick to shut down the rumors.

The 48-year-old set the record straight via Twitter on Thursday, December 17. "First of all I did not shade or diss lean rimes I rooted for her to win. She clearly told my kids that she'd never do the show to keep things a secret because they have big mouths," she clarified. "She deserved to win I'm glad she won! stop reading into s**t!"

Brandi Glanville denied rumors that she was shading LeAnn Rimes.

Brandi's clarification came one day after she mentioned LeAnn on her tweets. "Hope my kids bonus mom The Sun' Leanne Rines wins the masked singer tonight #Spitfire," she tweeted. After it was revealed that her children's stepmom was indeed the Sun and won the competition, she added, "I want to say it but I won't because I'm on NyQuil with a sore throat ...it's not over until the masked lady sings." 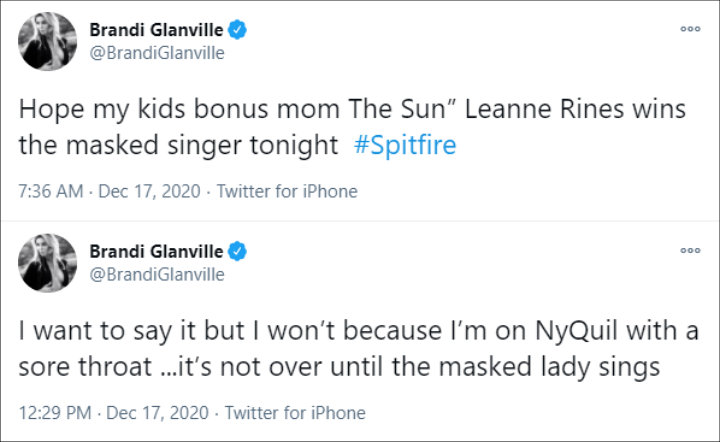 Brandi was quickly flooded with criticism from fans who assumed that she threw shades at the "How Do I Live" songstress. One argued, "You really are nasty vindictive a*****e." Another scolded, "You really are pitiful!" A third raged, "Your f bitter and jealous and you have no talent !! So you have to lie and fight in tv u r sad."

The "Famously Single" alum had actually predicted that LeAnn was under the guise of the Sun in season 4 of the FOX series for months. "I think the sun is 100 percent Leann Rimes #maskedsinger," the TV personality tweeted in October. "Although my kids say no way because she told them that she would never do this show because it's sooo beneath her."

Brandi Glanville had predicted that the Sun on 'The Masked Singer' was LeAnn Rimes.

Brandi was the ex-wife of LeAnn's current husband Eddie Cibrian. The former couple was married from 2001 to 2010. They share two sons, 16-year-old Mason and 12-year-old Jake, together. They called it quits in 2009 after Eddie had an affair with LeAnn when filming "Northern Lights".

LeAnn and Eddie got engaged in December 2010 and finally tied the knot in April 2011.