Stressing that the casting of Henry Zaga as deaf-mute Nick Andros on the series 'not acceptable,' members of Hollywood's Deaf community declares, 'enough is enough!'

AceShowbiz - "The Stand" is facing a stumbling block from the get-go. On the same day CBS All Access premiered its first episode, the miniseries based on Stephen King's 1978 novel received a boycott threat from members of Hollywood's Deaf community over its casting of hearing actor Henry Zaga as deaf-mute Nick Andros.

On Thursday, December 17, #DeafTalent owner Jade Bryan tweeted a protest letter that deemed Zaga casting unacceptable. "As a Black Deaf filmmaker/TV Creator, advocate of diversity & inclusion, acting instructor, & creator/owner of #Deaftalent campaign, I believe in change. It shouldn't be that difficult to cast the right person for the role," he wrote alongside the letter. 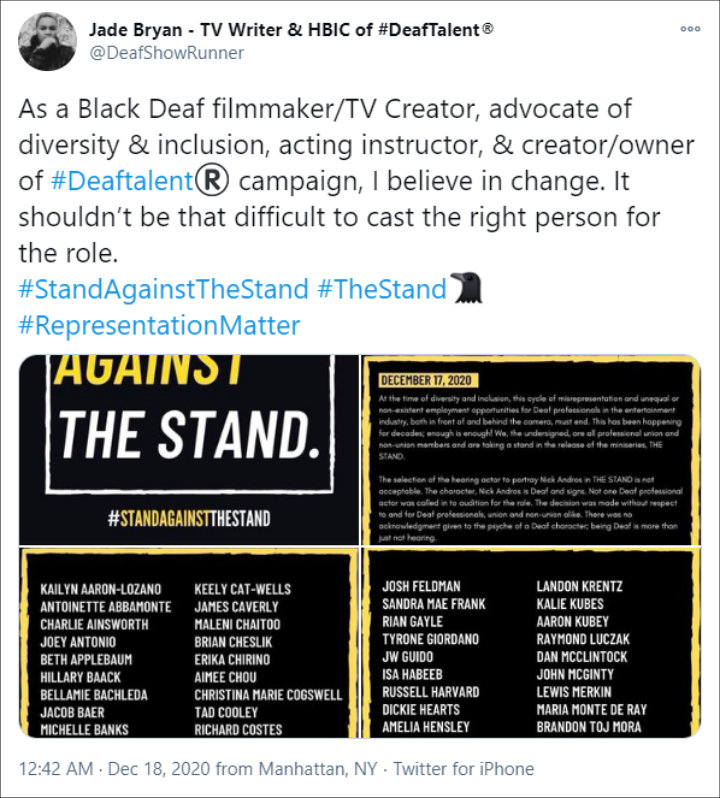 Having collected more than 70 signatures, the letter itself began with a call for an end to "this cycle of misrepresentation and unequal or non-existent employment opportunities for Deaf professionals in the entertainment industry, both in front of and behind the camera." It stated, "This has been happening for decades; enough is enough!"

Declaring the Deaf community's stance against the series, it explained, "The character, Nick Andros is Deaf and signs. Not one Deaf professional actor was called in to audition for the role. The decision was made without respect to and for Deaf professionals, union and non-union alike. There was no acknowledgement given to the psyche of a Deaf character; being Deaf is more than just not hearing."

A call for inclusion was stressed at the end of the letter. "It is time for industry professionals to create opportunity for Deaf talent to work on the set, in front of, and behind the camera, in the writing rooms, sit on creative teams when there is a Deaf character involved in the storyline," it read. "Our voice is a sign of the times."

This was not the first time "The Stand" faced criticism for the casting of Zaga. Back in August 2019, deaf actor and advocate Nyle DiMarco voiced his displeasure over it. "Nick Andros is DEAF in #TheStand and is being played by a hearing actor @henryzaga. Hollywood takes pride in diversity to ensure representation & authenticity.., BUT CONTINUES TO EXCLUDE people with disabilities," he wrote at the time. 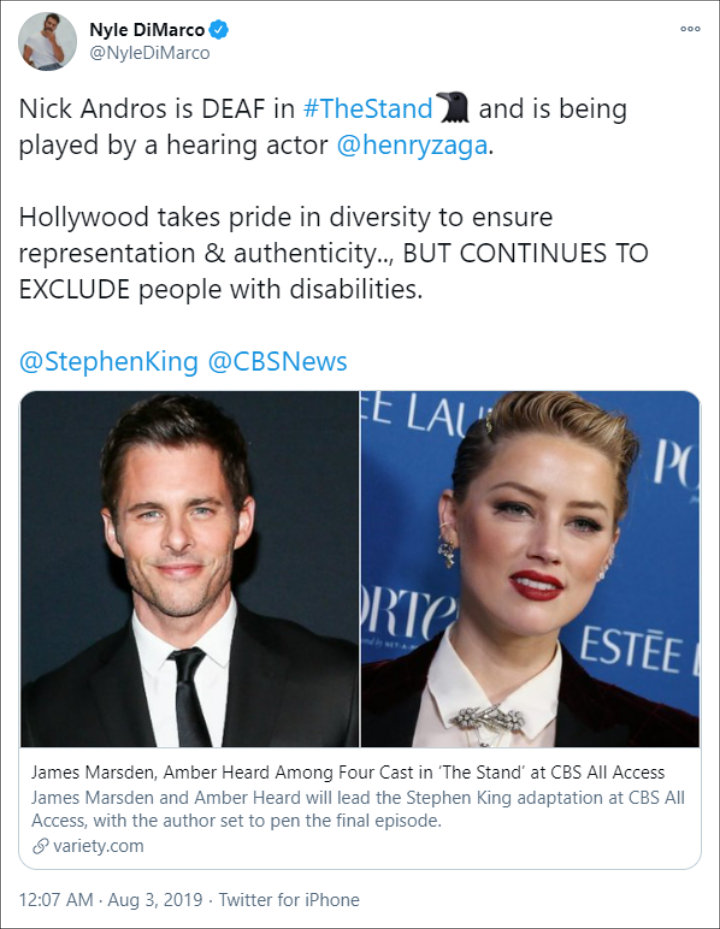 Nyle DiMarco criticized Henry Zaga's 'The Stand' casting back in 2019.

New episodes of "The Stand" will come out each Thursday on CBS All Access. It features a star-studded cast ensemble that include James Marsden, Greg Kinnear, Amber Heard, Whoopi Goldberg and Alexander Skarsgard.