The 'Drip Too Hard' rapper teams up with NBA star Stephen Jackson and ATL restaurant owners to make sure 7-year-old Gianna has a memorable birthday, months after the tragic passing of her father.

AceShowbiz - Lil Baby wanted to make sure George Floyd's daughter had a memorable birthday. Months after the symbol of police brutality tragically passed away at the hand of Derek Chauvin, the "Drip Too Hard" rapper teamed up with Stephen Jackson and Atlanta restaurant owners to surprise 7-year-old Gianna with a birthday party.

The 26-year-old was credited for ensuring the celebration took place due to his offer to cover all costs. Bringing up the story was Forbes on Wednesday, December 16. Erika Platt, who owns Restaurant Ten and Rosie's Cafe along with husband William Platt, told the publication, "Lil Baby decided to sponsor Gianna's birthday party and has been very supportive. We are very grateful for that."

Also extending gratitude for the generous act was Gianna's mother Roxie Washington. "This is a very difficult time for my daughter," she told the outlet. "So we're very grateful that our extended family is creating such a special experience for Gianna on her first birthday without her father."

The party was said to have been planned since July when Gianna visited the Platt family. Along with the NBA star, they finally decided to hold the event at Atlanta's Pink Hotel with the L.O.L dolls theme. People in attendance included the children of Rayshard Brooks, an Atlanta native who was fatally shot by police in June, as well as the children of Baby, Jackson and rapper Future.

Baby, whose real name is Dominique Armani Jones, took to Instagram Story to give a glimpse of the bash. In a series of clips, it could be seen that the venue was decorated with dozens of balloons and there was a buffet of sweets on the tables. One of the rooms, on the other hand, was designed for manicures and hairstyles. 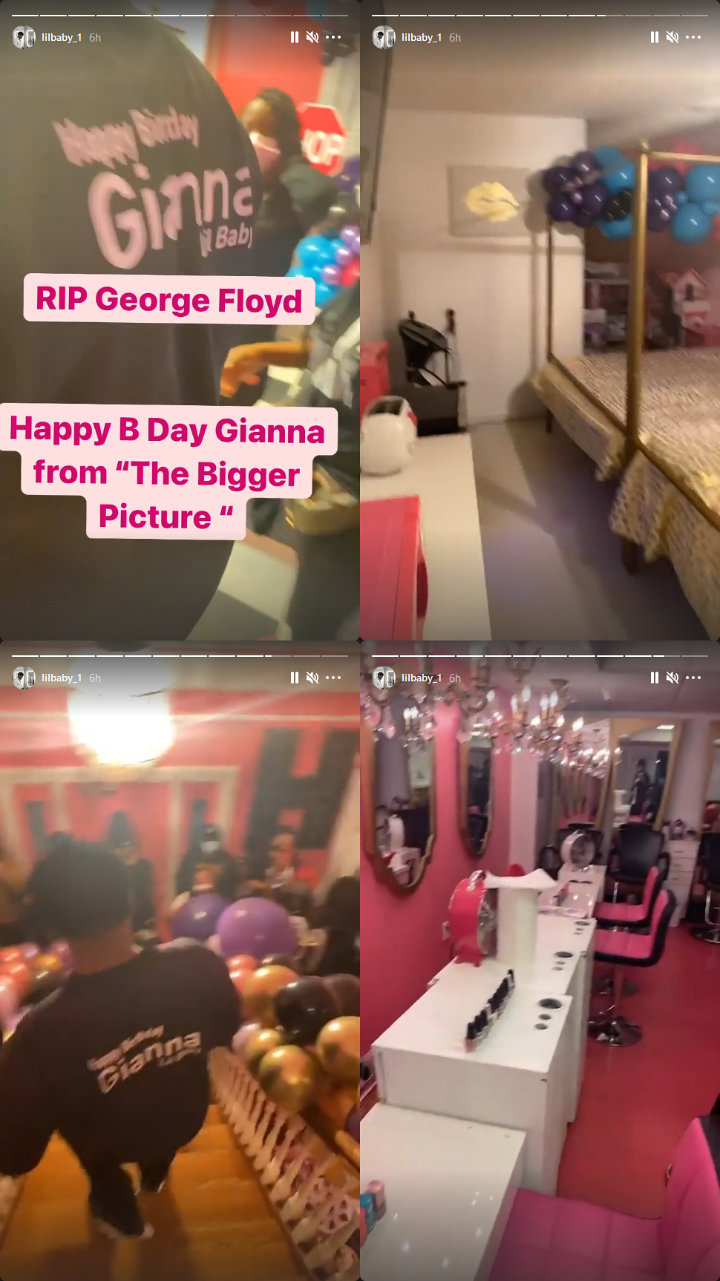 "The Bigger Picture" rapper also appeared to be taking a photo with Gianna and her mother Roxie. In a photo shared on the young girl's Instagram account, its note read, "L.o.l Surprise Birthday Party. Thank you so much @lilbaby_1 for coming and help me celebrate my 7th Birthday."

Beside Baby and Jackson, fellow celebrity Shaquille O'Neal also attended the celebration. "Thank you so much @shaq for coming and also helping me celebrate my 7th Birthday. I really appreciate it," Gianna's Instagram caption read.

Gianna's birthday party came nearly seven months after her father George passed away in Minneapolis. He was pronounced dead after police officer Derek kneeled on his neck for nearly nine minutes. His death has led to nationwide protests against police brutality and systemic injustice.