Wolfgang Van Halen calls TMZ 'scum' on social media after it came out with a report that his father's body was cremated 22 days after he passed away following a long battle with cancer.

AceShowbiz - Eddie Van Halen's son is clearly upset over the release of private information about his late father. Upon learning that TMZ published a report related to the late rock star's ashes, Wolfgang Van Halen took to social media to hit back at the tabloid.

On Sunday, December 13, Wolfgang made use of Twitter to describe TMZ as a "scum." The musician's remark came after the outlet reported that Eddie's body was cremated 22 days after he passed away following a long battle with cancer. The ashes were claimed to be delivered to the 29-year-old to be scattered in the Pacific Ocean off the coast of his father's hometown of Malibu, California.

Many of Wolfgang's fans offered their sympathy to him. One in particular, however, did not seem pleased with how he reacted to the news. "Know who you are starting to remind me of - [Donald Trump]. If anyone does something or says something you don't agree with, you immediately go on the attack with name calling and other immature replies. You're hurting your reputation with this trivial BS," the individual pointed out.

The response did not go unnoticed by the former Van Halen bassist. He later fired back, "Oh get f**ked AND blocked. I've got every right in the world to call people scum who release private information about my family. F**k them and f**k you."

"If you f**k with my family, especially my father who is unable to defend himself, you f**k with me," the son of actress Valerie Bertinelli continued in a following tweet. "It's my job to do so now and I'll never stop. So if you've got a problem with that, you can either learn how to get over it or unfollow me." 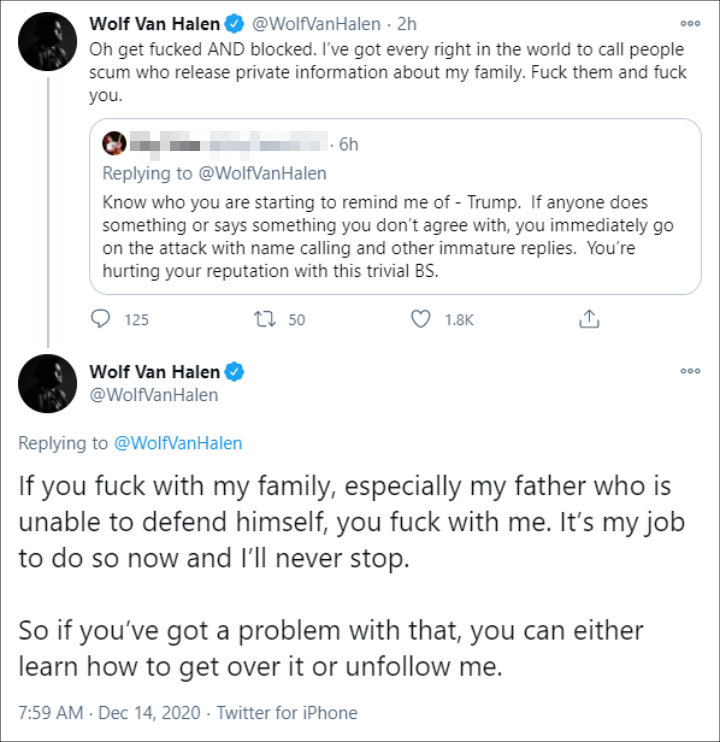 Wolfgang Van Halen fired back at a critic for criticizing his reaction to the news about his late father's ashes.

Wolfgang confirmed his father's passing on October 6. Taking to his social media accounts, he at the time announced, "I can't believe I'm having to write this, but my father, Edward Lodewijk Van Halen, has lost his long and arduous battle with cancer this morning."

"He was the best father I could ever ask for. Every moment I've shared with him on and off stage was a gift. My heart is broken and I don't think I'll ever fully recover from this loss," he continued. "I love you so much, Pop."