Backing the "True Detective" star, the "Charmed" alum tweeted on early Thursday, December 10, "Matthew McConaughey is right. Hollywood has been condescending, northern elite media liberals, too & it trickles down." She inserted her own opinion as adding, "Far before Trump presidency illiberal condescension & patronization has formed how too many think," before urging people to "break the class structure." 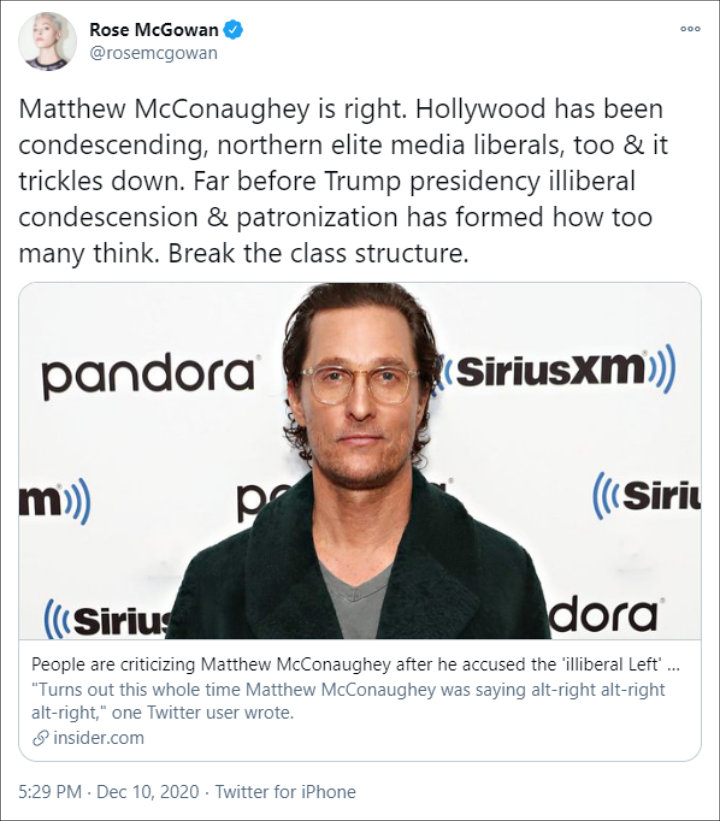 Rose was weighing on Matthew's comments on Russell Brand's podcast, during which he was asked if he noticed "condemnation and criticism of ordinary working people" in the industry. "Absolutely," the 51-year-old actor responded. "There are a lot of people on that illiberal left that absolutely condescend, patronize and are arrogant toward the other 50 percent. [There is] a kind of offhandedness, like, 'Oh, they're dumb, they're voting for Brexit, they're voting for Trump.' I don't like it, and I don't like to hear it."

Matthew pointed out the Hollywood liberals' hypocrisy while comparing the leftists' reactions to Donald Trump's 2016 win and the conservatives' refusal to accept Joe Biden's 2020 win. "I'm sure you saw it in our industry when Trump was voted in four years ago, they were in denial that was real. Some of them were in absolute denial," he said.

"It looks like Biden's our guy," the "Fool's Gold" star continued, before defending the conservatives for second-guessing the election results, "Now you've got the right that's in denial, 'cause their side has fake news. And I understand, they've been fed fake news. No one knows what the hell to believe, right? So they're putting down their last bastion of defense."

Matthew went on suggesting the two sides to meet in the middle because they "are so far apart." Blaming famous people on the left who continued taking shots at differing-thinking counterparts on the other side for preventing the two sides from coming together, he said of how they should make political statements, "Don't tab that gotcha at the end. The left will have to understand the science of 'meet you in the middle.' "

Matthew caught the heat with his remarks, with some accusing him of defending racism. "Sorry Matthew McConaughey, racism is not something that can be fixed by taking your shirt off," one responded to the actor's interview.