The 33-year-old TLC personality blasts an Instagram user who tries to police her fashion, telling her that she can't wear revealing clothes in order to respect her son.

AceShowbiz - Paola Mayfield is not letting anyone dictate her how to dress. Finding herself being criticized by an online troll who called her too "old" for wearing a sexy outfit, the "90 Day Fiance" star set aside time to fire back at the critic.

On Monday, November 30, the 33-year-old hit back at the Instagram user who tried to be her fashion police. "and who wants a 20 years old kid? Lol, the only thing old here is the condom you have been keeping in your wallet for so long [because] you haven't been able to use it," she slammed.

Paola's clapback came after the individual left a reply on her post that saw her wearing a black long sleeve crop top, blue ripped jeans and a pair of lace-up stilettos. The comment read, "Girl [you] old. [You] can dress sexy, but with respect for [your] son." When another user pointed out that "30 is not old," the troll insisted, "yes it is in a 20 year old eyes you both old timers." 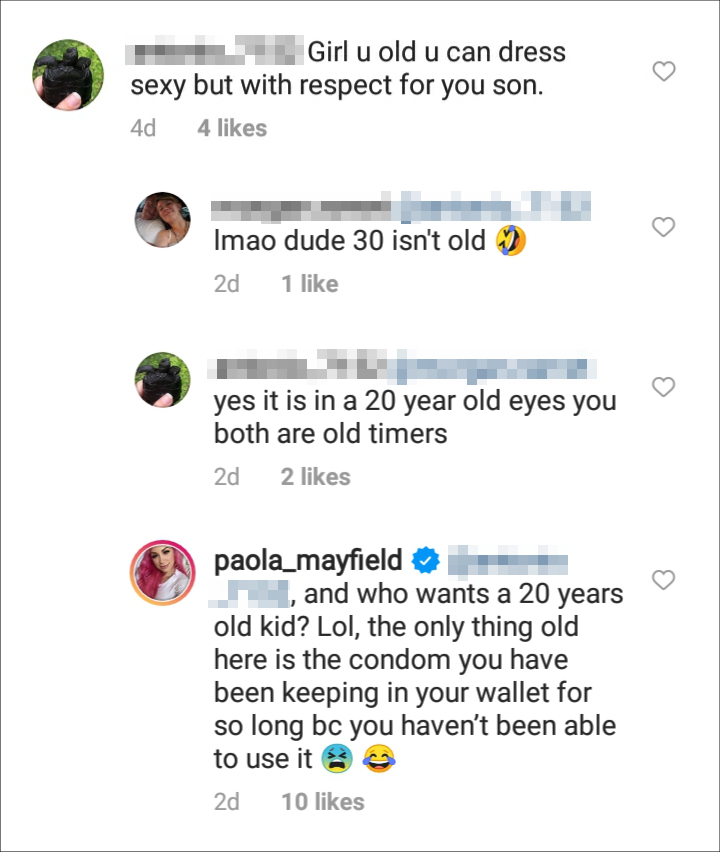 Paola Mayfield hit back at a hater criticizing her outfit.

The TLC personality was not the only one who spoke up against the hater. A number of her devotees came to her defense with one firing back, "a) She's not old at all b) There's nothing disrespectful to her son about this outfit." Another one stated, "It seems no one wants to see you succeed. @paola_mayfield stay true to yourself, no one can or can't tell you how to live your life. Keep up the good work."

This was not the first time Paola was forced to defend herself from haters. Back in March 2019, she responded to Instagram trolls criticizing her for vaccinating Axel, her son with husband Russ Mayfield, who was still 2 months old at that time. "Certain people tend to be nasty about anything I do, so I'm used to dealing with this lol," she told a fan who called her "brave" for posting about the vaccinations.