The Fat Amy depicter in the 'Pitch Perfect' film series has been steadily losing weight amid the coronavirus pandemic since she announced in January that 2020 would be her 'Year of Health.'

AceShowbiz - Rebel Wilson has successfully secured a major achievement on her wellness journey. Nearly one year after she announced that 2020 would be a "Year of Health" for her, the actress best known for her portrayal of Fat Amy in the "Pitch Perfect" film series revealed that she finally hit her weight goal with one month to spare.

On Sunday, November 29, the 40-year-old star took to Instagram Story to share a photo of her scale and a message about her success. "Hit my goal with one month to spare! Even though it's not about the number, it's about being healthy, I needed a tangible measurement to have as a goal and that was 75kgs [165 lbs]," she proudly declared.

The "How to Be Single" actress went on to inform fans and followers that she will offer more details on the subject on Tuesday, December 1. "I wanna go live on Insta on Tuesday night when I'm back in US to share stuff with you guys and thank everyone for their support. Sooo until then...6p NYC time," she teased. 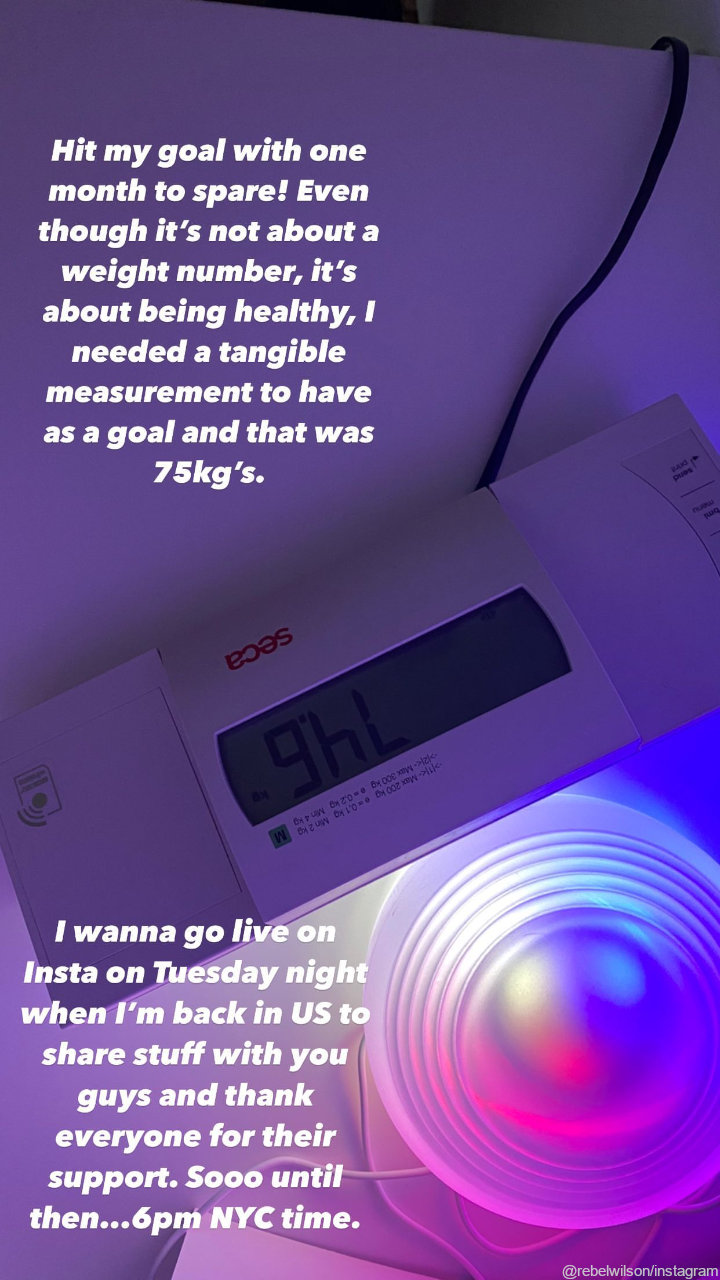 Rebel's revelation came eleven months after announcing her weight loss journey. In early January, she declared, "Okay so for me 2020 is going to be called 'The Year of Health' - so I put on the athleisure and went out for a walk, deliberately hydrating on the couch right now and trying to avoid the sugar and junk food which is going to be hard after the holidays I've just had but I'm going to do it! Who's with me in making some positive changes this year?"

The "Jojo Rabbit" star, who has been steadily losing weight amid the coronavirus pandemic, has been vocal about her weight loss goal. "You never want it to be about the number, because it really isn't about that," she told PEOPLE in mid-November. "It's about: I was doing some unhealthy things to my body and I just wanted to change it and become a healthier person."

In another interview with PEOPLE, Rebel also got candid about her past eating habits. "Before I was probably eating 3,000 calories most days, and because they were normally carbs, I would still be hungry," she confessed. "So, I've really changed to eating a high-protein diet, which is challenging because I didn't used to eat a lot of meat."