Chrissy Teigen Is Still in 'Grief Depression Hole' After Miscarriage

However, the model wife of John Legend believes that she will 'be fixed soon' as she has been receiving 'so much help around me to get better' after the pregnancy loss.

AceShowbiz - Chrissy Teigen is still trying to recover mentally after experiencing pregnancy loss back in October. The model wife of John Legend opened up in a new Twitter post that she isn't that active on the blue bird app because she's still in deep grief.

"I'm not tweeting much because I'm honestly in a bit of a grief depression hole but do not worry as I have so much help around me to get better and I'll be fixed soon," she shared on Wednesday, November 25. "they'll call when im better and ready for pickup and u can swing by and grab me ok? thank u and love you!" 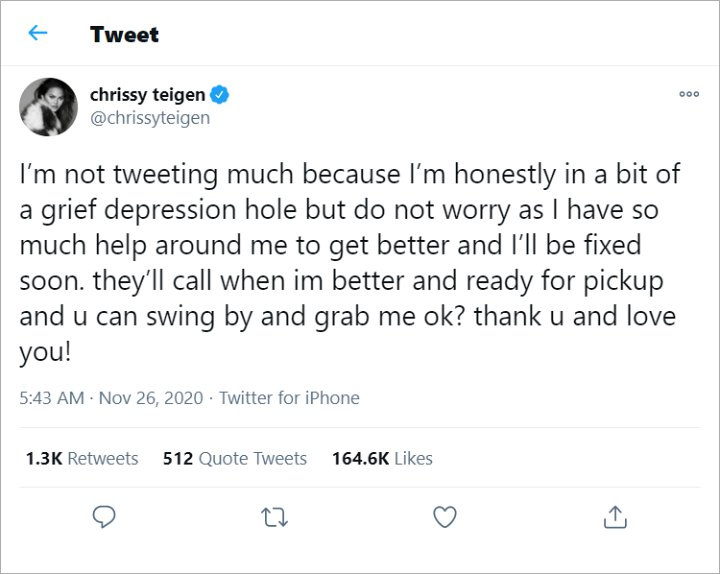 One of her followers thought that it "feels like this was supposed to be a DM but i hope your healing process is moving along." To that, the "Lip Sync Battle" co-host responsed, "lol no I don't look in there it's a podcast-asking cesspool."

Her devastating experience of miscarriage seemingly made Chrissy defensive. Earlier on the day, she blasted a British reporter after he criticised Meghan Markle's decision to share her miscarriage news in a candid op-ed.

"Is anyone really questioning the pain and sheer awfulness of suffering a miscarriage, or are they perhaps critising Meghan's decision to write a 1,000 word op-Ed about herself? What does it add to the resources already available for those who go through a tragedy like this?" Daily Express reporter Marco Giannangeli tweeted.

"Award for today's absolute piece of s**t goes to Marco Giannangel. Congratulations, piece of s**t," Chrissy responded to the diss. However, she quickly regretted lashing out and wrote, "Sorry forgot I'm trying to be nicer lol," after deleting the tweet.

Chrissy previously opened up in an interview with Entertainment Tonight about the heartbreaking pregnancy loss in addition to thanking people for their outpouring support. "We've heard from so many people who have gone through it too and it's been encouraging to be getting so much love and support from so many people who have experienced similar things," the mother of two shared. "Chrissy sharing what she shared has also been helpful for other people who are going through it and may go through it in the future. So thank you."

She also revealed in a sweet Instagram post that she had been relying on her mom, Vilailuck Teigen, amid the hardest time in her life. "One day I will tell you the recent story of the hardest 4 days of my life. for now, here's me needing my mommy," she wrote alongside a photo of herself snuggling up to her mom and daughter Luna.

Chrissy Teigen No Longer Has 'Strong' Stomach Amid Pregnancy