The TLC star is enjoying her time with her new boyfriend Christopher 'Topher' Park during the couple's getaway for her birthday weekend when she notices the wild speculations.

AceShowbiz - Deavan Clegg is not pregnant. When setting the record straight on swirling speculations that she is expecting her third baby with new boyfriend Christopher "Topher" Park, the "90 Day Fiance" star called out people who came up with such wild rumors.

On Saturday, November 14, the 24-year-old made use of Instagram Story to shut down the claims. Alongside a very close up photo of her staring at the camera with her index finger resting on her temple, she clarified, "Friendly reminder that I'm not pregnant. Stop asking. It's extremely rude [side eye emoji]." 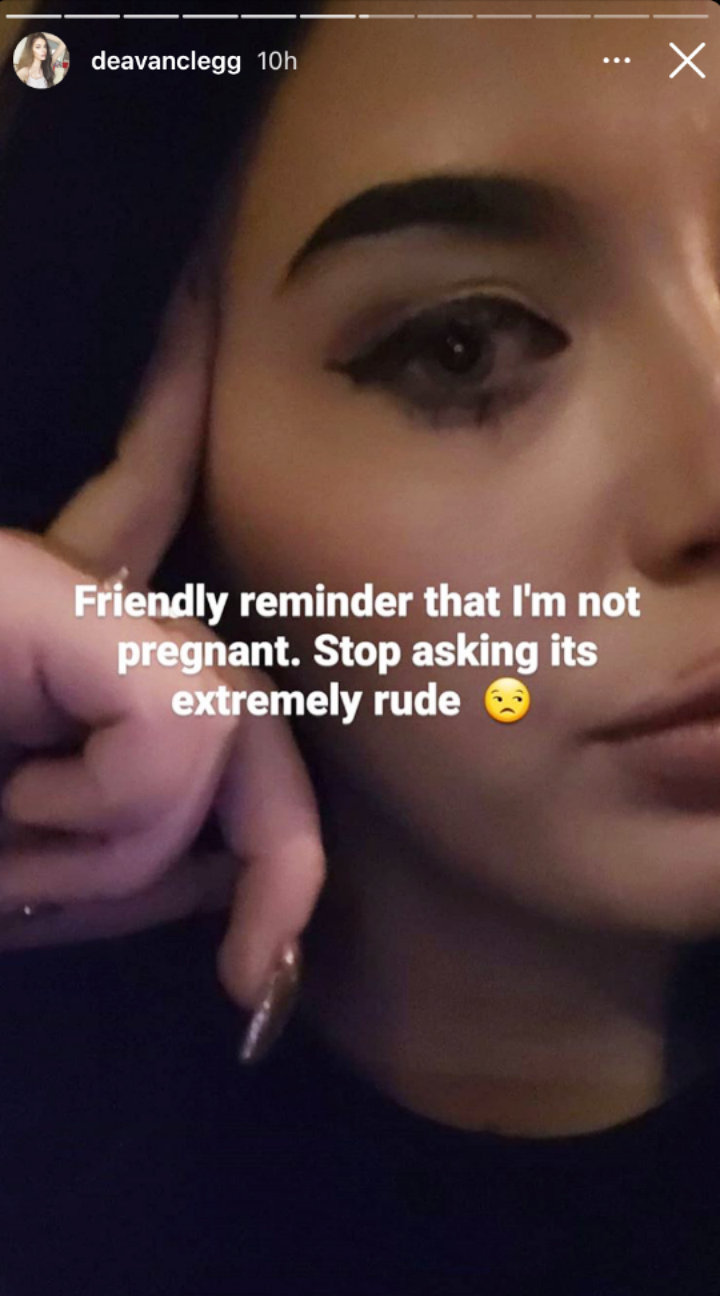 The pregnancy rumors first emerged after the reality star shared a photo of her posing inside a hotel room which was taken while she and her boyfriend celebrated her birthday. "My birthday is tomorrow but this weekend has been a complete dream. thank you @hyu.nw," she captioned the snap of her wearing a white peplum tank top with dark high-waisted jeans and a sherpa jacket.

Deavan's post triggered a number of pregnancy inquiries from many social media users. One asked, "Are u pregnant?" Another threw in the same question, "You're pregnant?!" A third claimed, "She looks preggo.....AGAIN." A fourth, in the meantime, concluded, "This girl needs to learn how to use birth control."

The "rude" questions prompted many of Deavan's online devotees to defend her. One argued, "She doesn't look pregnant. She's wearing a babydoll shirt, y'all are so whack. Happy birthday Deav I love seeing you truly happy." Another one pointed out, "YOU DO NOT LOOK PREGNANT. People stop being damn rude! YOU LOOK BEAUTIFUL."

Deavan is already a mom to 5-year-old daughter Drascilla from a previous relationship. She also shares a 19-month-old son, Taeyang, with her South Korean estranged husband, Jihoon Lee. In season 1 of "90 Day Fiance: The Other Way", she revealed that she and Jihoon met online.

The TV personality became pregnant with their son during their first weekend together when he visited her in the United States. The two got engaged shortly before she gave birth to their son in April 2019. They tied the knot several months later after they traveled to South Korea along with their baby boy to meet with his paternal grandparents.

Tiny 'Glad' That Notorious B.I.G. Apologized Over Xscape Diss Minutes Before His Murder