'Hamilton' Star Leslie Odom Jr. Has 'Lots of Reasons to Celebrate' With 2nd Baby on the Way

The Aaron Burr of the Tony Award-winning musical is praying for his unborn baby boy and 'all the little ones on the way' as he announces his wife Nicolette Robinson's pregnancy.

AceShowbiz - Leslie Odom Jr. is set to become a father once again. The Aaron Burr of the Tony Award-winning musical "Hamilton" has announced that he and his wife Nicolette Robinson are expecting another child, gushing in his statement that he has "lots of reasons to celebrate" with their second baby on the way.

The 39-year-old actor broke the happy news via Instagram on Monday, November 9. "Lots of reasons to celebrate over here. Lots of reasons for hope too. Baby boy and mama are doing swell. Praying for him and all the little ones on the way! The new class!! We'll make it right for you," he wrote alongside photos of him, his pregnant wife and their 3-year-old daughter Lucille.

Also going public about the pregnancy was Leslie's wife Nicolette. Posting a series of her family portraits on Instagram, the expectant mother spilled that her baby is due to arrive in March 2021. "Sweet baby boy, we cannot wait to meet you. More reasons to love, to live, to connect, to pave the way for you and other little ones arriving in this world... We love you. Arriving March 2021," she wrote.

Nicolette's post was welcomed with excitement by many of her famous friends. "Glee" alum Matthew Morrison raved, "What what?!!! Best news ever! So happy for you, my family!" Maddie Ziegler of "Dance Moms" congratulated her by saying, "so beautiful, congrats !!!!!" Additionally, "Twilight" actress Nikki Reed chimed in by simply commenting, "the most beautiful."

Hours after sharing the happy news, Leslie divulged on his Instagram Story that they have already named their unborn child. "We do. We only refer to him by his name around here," he replied to a fan who asked him if he and his wife have any baby names in mind. "We're really excited. Thank you for all of the positivity and the love, the outpouring of love today. We've seen it and we really appreciate it." 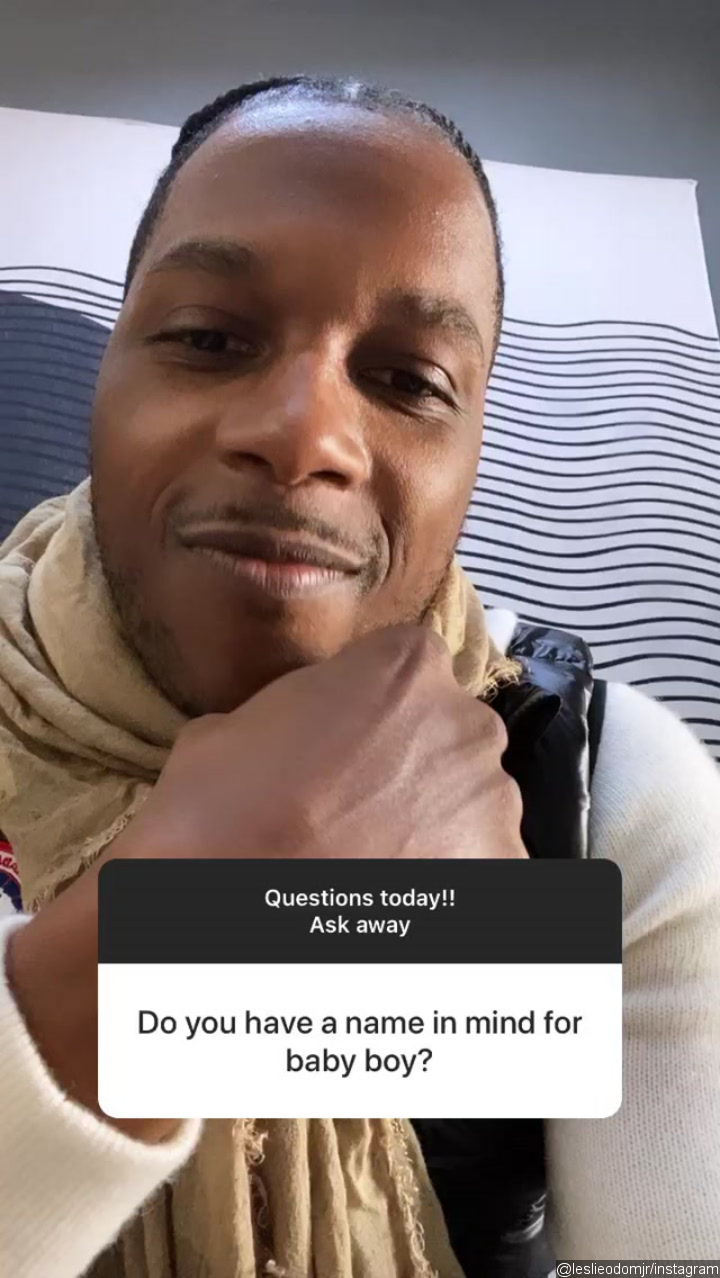 Leslie Odom Jr. revealed that he and his wife already named their unborn child.

Leslie and Nicolette met at an audition for the musical "Once on This Island" back in 2008. They got married four years later, and welcomed their first born Lucille in April 2017.

Leslie Odom Jr. Very Conscious of Covid-19 Due to His Previous Battle With Swine Flu

Leslie Odom Jr. Grateful to His Parents as They Move In to Help With New Baby