The Gabrielle Solis of 'Desperate Housewives' claims she simply compares Latina women to Latina men when saying that 'Latina women are the real heroines' in Biden-Harris win.

AceShowbiz - Eva Longoria has landed in hot water following her interview on MSNBC to talk about the role of diverse coalition, specifically people of color, that ousts Donald Trump from White House. "The Young and the Restless" alum has been accused of taking credit from black women as she praised Latina women for playing a big role in Joe Biden and Kamala Harris' win.

"Women of color showed up in big ways. Of course, you saw in Georgia what black women have done but Latina women are the real heroines here," she said during the TV appearance on Sunday, November 9. "Beating men in turnout in every state and voting for Biden-Harris at an average rate close to 3 to 1."

Shocked by Eva's statement, the Huffington Post editor Philip Lewis posted footage of the interview while simply reacting, "what?" Political activist Sema Hernandez also disagreed with Eva, tweeting, "Somebody check on @EvaLongoria, I heard she took her mask off."

Learning of people's response to her statements, Eva quickly took to her social media pages to clarify them before they were spun out of control. "About my MSNBC interview, Black women have long been the backbone of the Democratic Party, something we have seen played out in this election as well as previous ones," she wrote on Twitter.

Giving the credit to black women, she added, "Black women absolutely should be applauded and lifted up! They brought this victory home in a BIG way!" She explained that when she said "Latina women are the real heroines," "I was comparing Latinas to Latino men. Not black women. I meant Latinas were the ones who showed up for our LatinX community."

The 45-year-old went on sending a message of union to Americans, "Finally, Black women don’t have to do it alone. Latina women and other women of color are standing with them and growing their voice and power. Together we are unstoppable!!! Black women turned out 90% for Biden. I as a Latina, aspire to be as engaged as effective as they are!"

Eva also posted a longer statement to further address her controversial comments. "I'm so sorry and sad to hear that my comments on MSNBA could be perceived as taking credit from Black women. When I said that Latinas were heroines in this election, I simply meant that they turned out in greater numbers and voted more progressively than LATINO MEN," she once again stressed.

"My wording was not clear and I deeply regret that," she acknowledged. Giving the credit where it's due, she continued, "There is such a history in our community of anti-Blackness in our community and I would never want to contribute to that, so let me be very clear: Black women have long been the backbone of the Democratic Party, something we have seen played out in this election as well as previous ones." 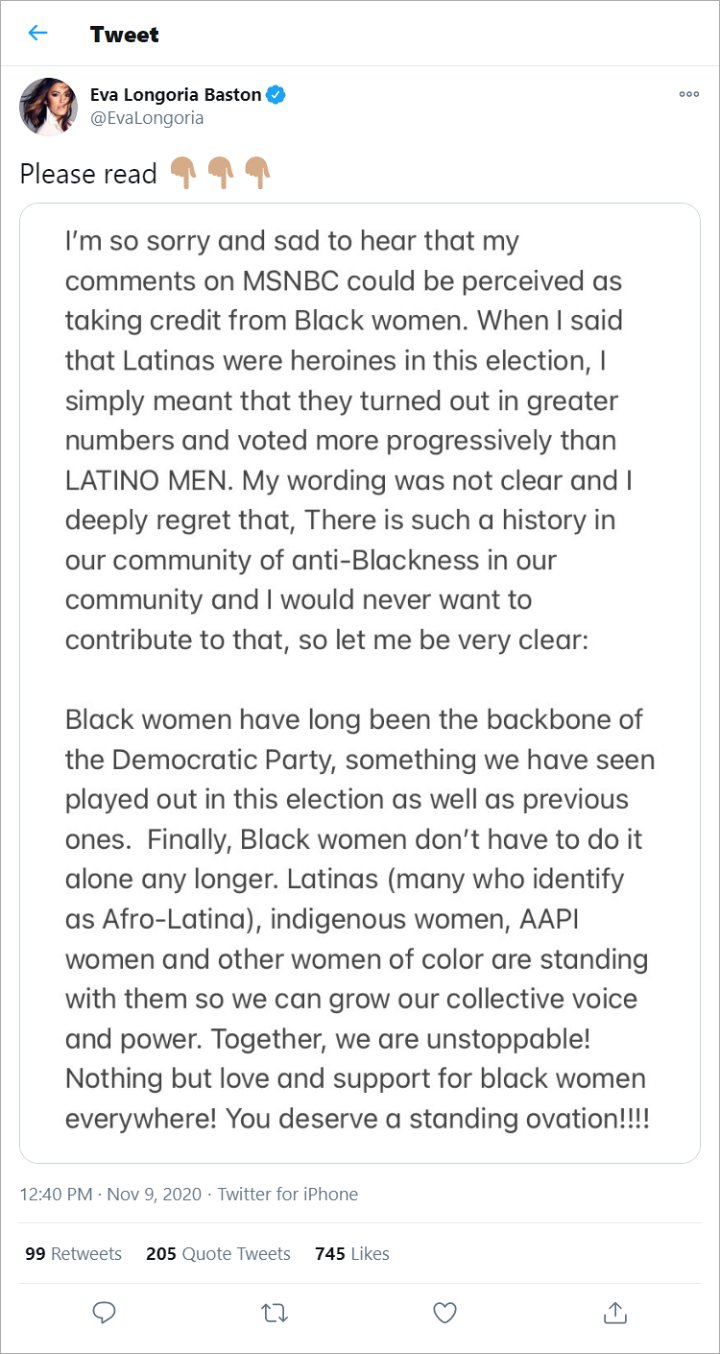 Eva Longoria clarified her comments about Latina women being the 'real heroines' in Biden-Harris win.

"Finally, Black women don't have to do it alone any longer. Latinas (many who identify as Afro-Latina), indigenous women, AAPI women and other women of color are standing with them so we can grow out collective voice and power," she continued, before concluding, "Together, we are unstoppable! Nothing but love and support for black women everywhere! You deserve a standing ovation!!!!"

Eva Longoria Vows to Never Be A Mom Shamer to Others