The 62-year-old 'The Boss Baby: Family Business' star also shares a black-and-white picture of him as the defeated presidential candidate who brings a paper sign with 'You're Welcome!!!' written on it.

AceShowbiz - Most people were rejoicing when Joe Biden was declared as the new president of the United States, dethroning Donald Trump. Alec Baldwin was among those people, but he had another reason why he was "overjoyed" following the announcement of the results of November 3 presidential election.

On Saturday, November 7, the "The Boss Baby: Family Business" actor tweeted, "I don't believe I've ever been this overjoyed to lose a job before!" Alec was referring to his role as POTUS on NBC's "Saturday Night Live". With Donald's defeat, he doesn't have to impersonate the businessman-turned-to-president, whom Alec openly dislikes, again. 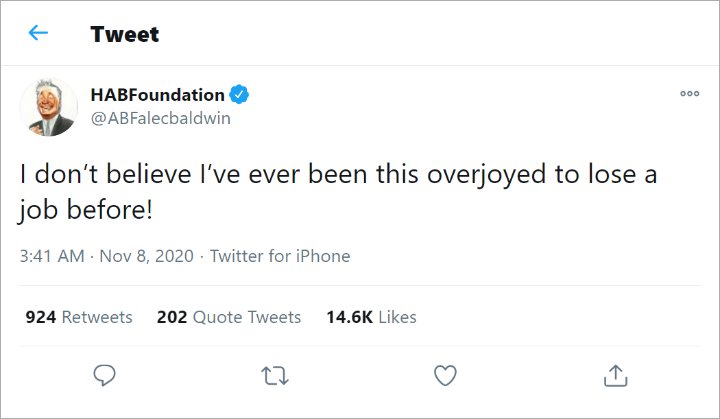 In another tweet, the 62-year-old star shared a black-and-white picture of him as Donald, who brought a paper sign with "You're Welcome!!!" written on it. "It's been fun," Alec simply captioned the snap. 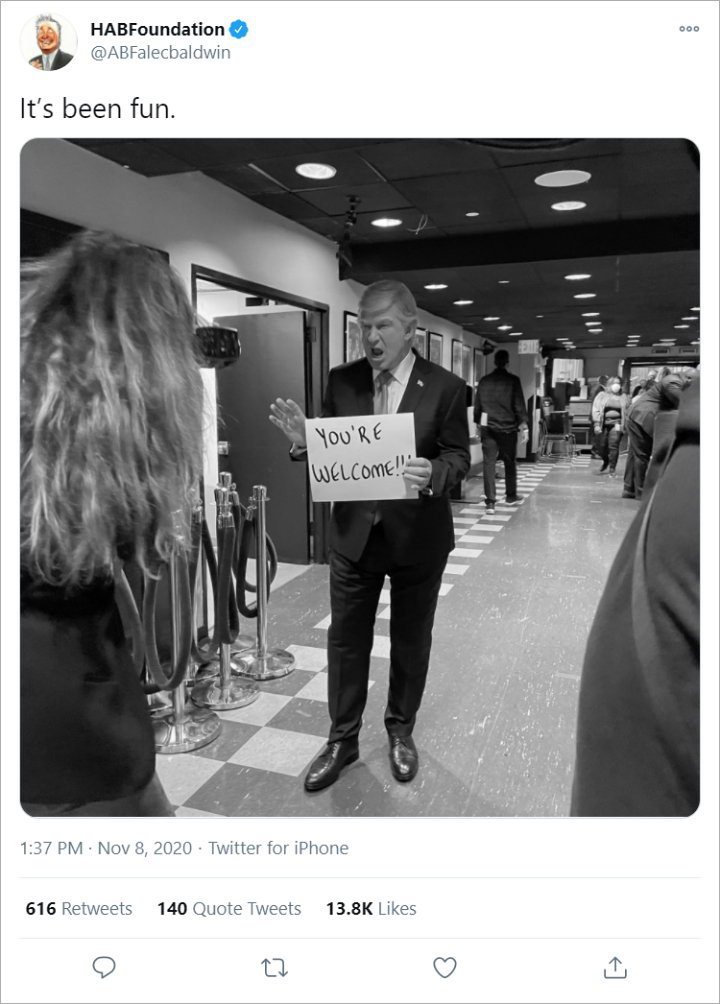 He went on shading Donald in a follow-up tweet. "It will be comforting when we have a President who doesn't Tweet twice as much as I do … They're gonna need an enormous shipment of tissues sent to Mar-a-Lago … On to my next wish. That everyone who voted in this election maintains that commitment and votes in the 2022 midterm elections. Let's keep this going!!!" he said.

The election outcome was called by major media outlets on Saturday, just hours before a new episode of "SNL" featuring Alec's Donald aired. "As anyone who died halfway through Tuesday knows, I was re-elected president of the United States," he said.

Meanwhile, "SNL" cast member Gary Kroeger talked about Alec's long-running performance in the episode, which was hosted by Dave Chappelle. "I won't miss Baldwin's Trump at all," Gary said. "That doesn't mean I didn't like it, I did, and still do, but there hasn't been a new twist on his characterization in a couple of years. How could there be? It was done to death."

Alec snagged a Primetime Emmy award in 2017 for the role.