The 'Summertime Sadness' singer additionally calls another social media user 'stupid' for implying that she was supporting Republican win using a clip from her November 3 Instagram livestream.

AceShowbiz - Lana Del Rey is not letting anyone make misleading statements about her political stance. Having been accused by a social media user of voting for Donald Trump in the 2020 presidential election, the "Summertime Sadness" singer reacted strongly against the claims, and pushed the so-called fan to "unstan" her.

On Tuesday, November 3, the 35-year-old, whose real name is Elizabeth Woolridge Grant, noticed a tweet directed at her that read, "I just KNOW Elizabeth voted for Trump, I wish I could look up her voting records. Something doesn't sit right with me." In response, she clapped back, "Go. F**k. Yourself."

Lana's reply prompted the Twitter user to write back, "Lana telling me to go f**k myself when I have her tattooed on my arm lmfaoooo alright then." That got the "Young and Beautiful" songstress to hit back, "Nah read what u wrote h*e." 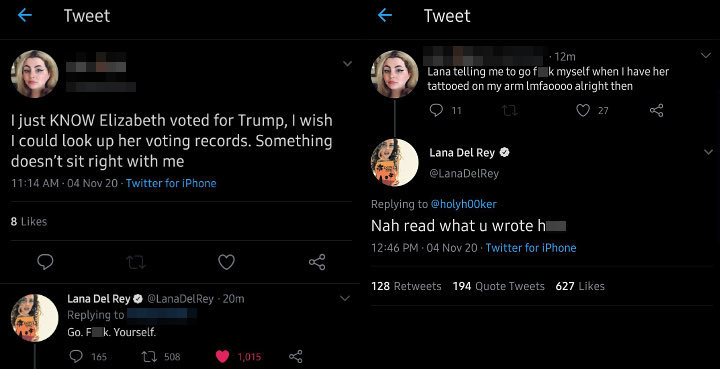 Lana Del Rey fired back at a fan accusing her of supporting Donald Trump.

When another user suggested the fan to "unstan" the musician, the fan pointed out in a since-deleted tweet, "I honestly think I'm gonna have to, It's just really hard." Responding to this exchange, the "Born to Die" singer dared the fan by stating, "Bro. I've been waiting for u to. Do it." 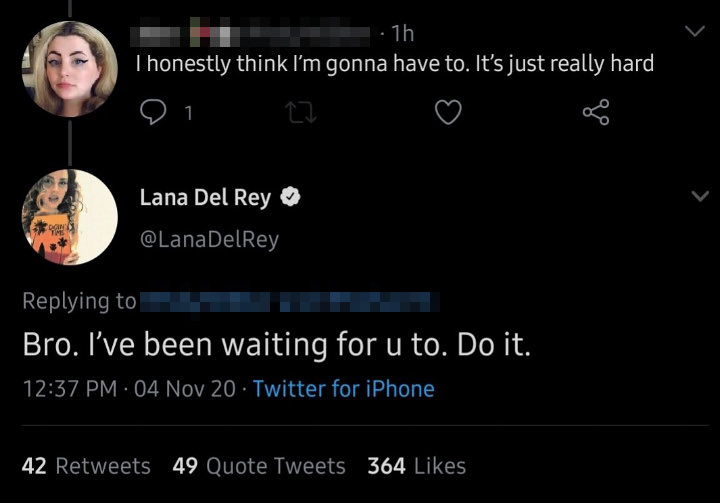 Aside from blasting this fan, Lana has called out another social media user for implying that she was rooting for a Republican win using a clip from her November 3 Instagram livestream. "Choosing this misleading clip out of the entire livestream Isn't going to get you more livestreams," she argued in one tweet, before adding in another tweet, "Stupid."

Lana Del Rey called out another fan who made a similar accusation.

In the wake of Lana's clapback, the particular Twitter user issued an apology. "i'm sorry to lana and to all of you. i didn't post this clip of the live in the purpose to hurt lana or anyone. i know lana is anti trump and my goal wasn't to call her out or whatever. once again, i'm sorry," the person explained.

Despite the online exchanges, Lana has not gone public about whom she voted for in the 2020 election.