Emily Ratajkowski Grossed Out by Resurfaced Sexist Interview About Her

The 'Gone Girl' star calls out a journalist who implied that her sexiness is 'confusing' and in contradiction with her being an intelligent person in a 2018 interview.

AceShowbiz - Emily Ratajkowski is making it clear that she will never do another sexist interview. After a profile of her from a 2018 interview with French Marie Claire resurfaced on social media, the model known for her portrayal of Andie Hardy in "Gone Girl" openly slammed the article for its "gross/embarrassing aspects."

On Monday, November 2, the 29-year-old took to Twitter to condemn the offensive piece. "If never read this before but I really hope this will be the last of my 'she has breasts AND claims to read' profiles/interviews. Lots of levels of gross/embarrassing aspects to this but the attempt at a feminist critique at the end is maybe the worst part," she scolded. 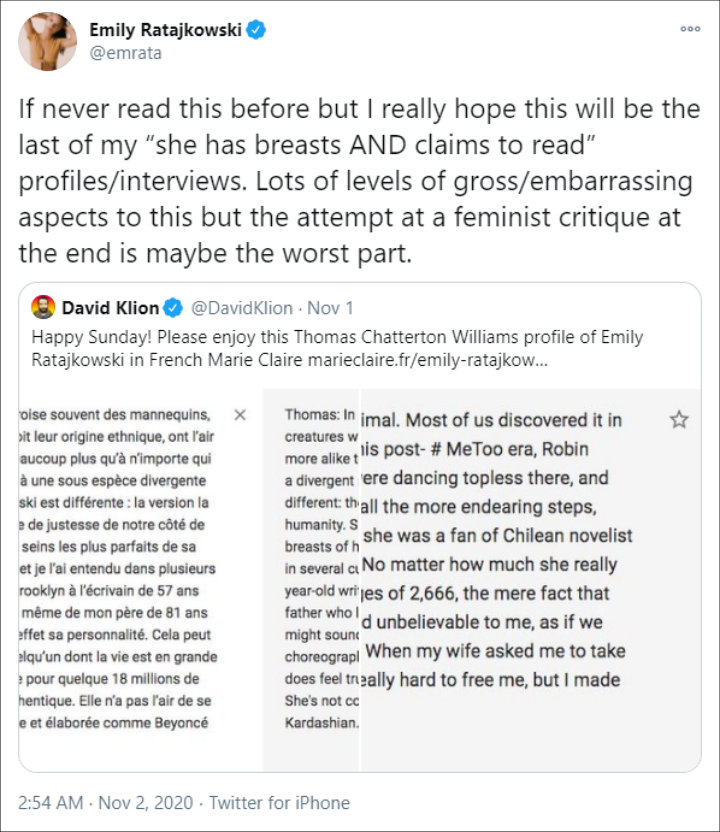 Emily Ratajkowski was grossed out by resurfaced sexist interview about her.

In the column, which was originally published in French, Emily was described by writer Thomas Chatterton Williams as "the sexiest version of a creature right on our side of humanity." After noting that she "was admittedly blessed with the most perfect breasts of her generation," he highlighted on the model's sexual appeal by writing, "[her] sexuality is omnipotent and animal."

To make matters worse, Thomas admitted he found it hard to believe that Emily was "a fan of Chilean novelist Roberto Bolano." He dished, "…, my brain shorted. No matter how much she really took the time to read the 1,300 pages of [Bolano's novel] 2666, the mere fact that she knew his name already seemed unbelievable to me, as if we were definitely meant to get along."

Thomas further mentioned in the article that Emily's "absurd and confusing" outfit is "in contradiction" with her "intelligent thought." Firing back at the statement, Emily posted another tweet in which she simply wrote, " 'Confusing' outfit lol." 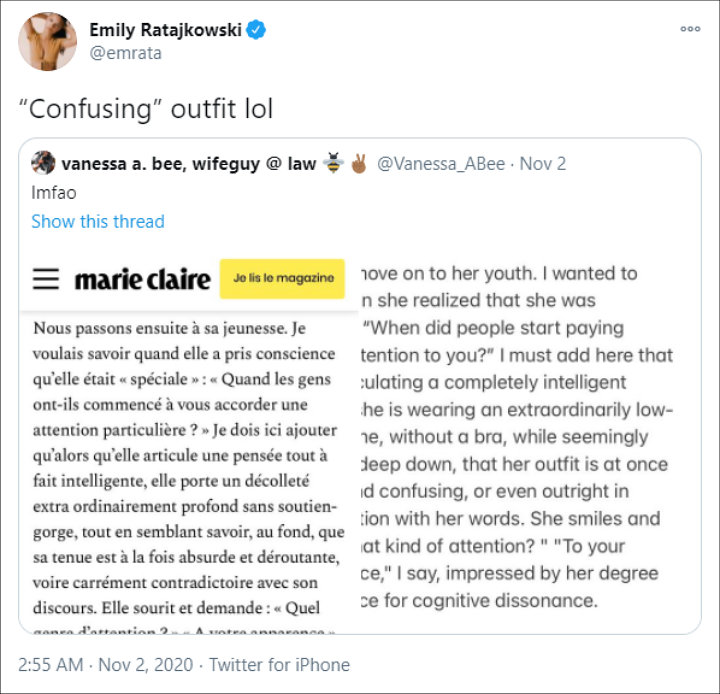 Emily Ratajkowski fired back at Thomas Chatterton Williams' description about her outfit. 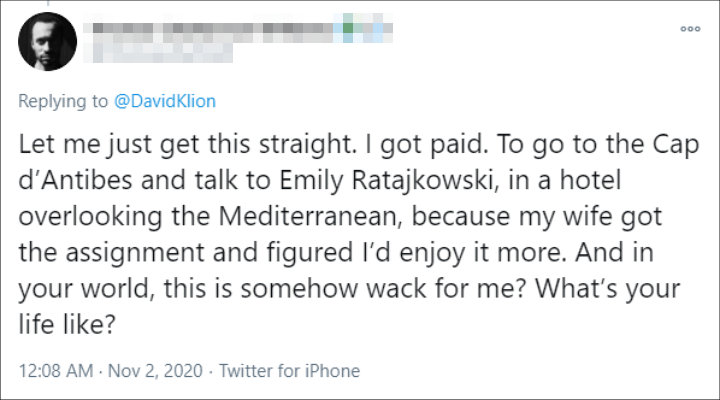 Thomas Chatterton Williams defended himself amid criticism over his sexist article.

While Emily took issue with his piece, Thomas refused to apologize and defended himself. "Let me just get this straight. I got paid," he tweeted. "To go to the Cap d'Antibes and talk to Emily Ratajkowski, in a hotel overlooking the Mediterranean, because my wife got the assignment and figured I'd enjoy it more. And in your world, this is somehow wack for me? What's your life like?"

'The Voice' Recap: Coaches Complete Their Teams in Last Night of Blind Auditions

Emily Ratajkowski Blames Adam Levine for Alleged Affair, Chrishell Stause Is Put Off by His Apology