The 26-year-old British singer publicly shows support for the Democratic presidential nominee by making a reference to his slogan from his sophomore album 'Fine Line'.

AceShowbiz - Harry Styles has joined a list of celebrities who voiced their support for Joe Biden. Despite the fact that he is not eligible to vote in the November 2020 election, the former One Direction member publicly endorsed the Democratic presidential nominee, declaring that he would "vote with kindness."

On Tuesday, October 27, the 26-year-old British singer retweeted the former Vice President's one-minute video campaign that was narrated by Brad Pitt. "If I could vote in America, I'd vote with kindness," he wrote as he referred to his slogan "Treat People with Kindness" from his sophomore album, "Fine Line". 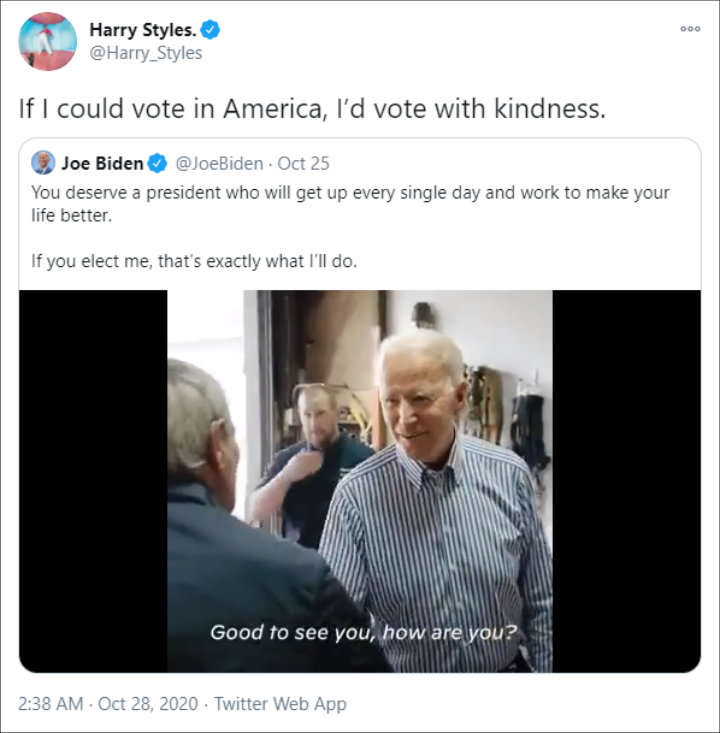 Some scenes in the footage display Biden on his campaign rallies. In his own tweet, the politician captioned the clip, "You deserve a president who will get up every single day and work to make your life better." He then added his promise, "If you elect me, that's exactly what I'll do."

The pop star's "vote with kindness" remark has since, according to Pop Crave, become trending on Twitter with over 200.000 tweets.

Styles' endorsement came nearly a month after he helped "Saturday Night Live" poke fun at the presidential debate between Biden and Donald Trump. In the "cold open" segment featuring Jim Carrey and Alec Baldwin as the two candidates respectively, the singer popped out in an air bubble above Carrey's head as the latter claimed that the former's meditation tape "would calm [him] down."