The son of Joe Biden is accused of cocaine use and running illegal business in Ukraine after tapes of him engaging in sex acts were published on a Chinese website linked to ex-Donald Trump adviser Steve Bannon.

AceShowbiz - Candace Owens has given her two cents in Hunter Biden scandal, but as always not everyone appreciated her comments. The conservative political commentator claimed everything that was leaked on the Internet on Saturday, October 24 was "real" because the son of Democratic Presidential nominee Joe Biden has remained silent on the matter. 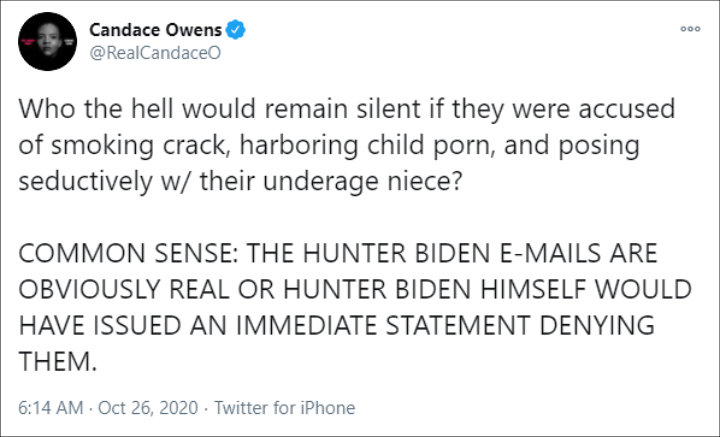 But many disagreed with her, with one saying another possibility, "Isn't it possible he's ignoring because he thinks that they are ridiculous? Not saying you're wrong, I just try to be open to possibilities."

"I keep telling these nuts the same thing. Hunter isn't running. But Candice is a nut, that will never get it. I pity the baby she is about to have. Saddddd situation," another said of why Hunter doesn't need to address the matter. A third user added, "Ooooooor they don't even want to give any credence whatsoever to them. There isn't a need to address every moronic Russian operation."

Agreeing, a fourth person wrote, "The crack addicts are the ones pushing this stupid story. Hunter should ignore this foolishness." One other person tweeted, "It's refreshing to know that after Nov. 3 this type stupidity will be heard from no more. It's obvious this story has no legs."

"You probably had the same reaction when the Access Hollywood tape came out," another wrote, referencing Donald Trump's leaked audio in which he made vulgar remarks about women. Someone else pointed out, "Well Trump denied his relationship with Stormy and was found out to be lying. Y'all still praise him. If he denied it Y'all would still say he's lying. You speak on Hunter so much. Did you see them?"

On Saturday, alleged sex tapes and images showing Hunter engaging in sexual acts with several women and using drugs were uploaded on Chinese website GTV. One of the uploaded videos claimed, "U.S. presidential candidate Joe Biden is 100% controlled by the Chinese Communist Party as one of the most successful political instances of the BGY program." It went on accusing the former VP, "He is also a target of the CCP's 3F plan, which aims to 'fall, fail, and fell,' to weaken, destroy and kill America!"

The video leak has since been revealed to be linked to Trump's former senior adviser Steve Bannon. GTV is a subsidiary of GTV Media Group, which was founded by Bannon and Chinese billionaire Guo Wengui in April 2020.

Bannon, who was arrested and charged in August with defrauding donors to the Mexican border wall initiative, had access to the contents of a hard drive believed to have belonged to Hunter from his stolen laptop. In an interview with Sky News last week, Bannon claimed everything found on Hunter's alleged laptop is true.

"Joe Biden has lied about this for years," he said. "The guys on the emails said absolutely the meetings happened. This is not off of some Russia intelligence operation. That emails correct, the meanings correct and, by the way, that 10 percent of the equity is Joe Biden's."

Biden's campaign has denied the accusation pushed by Trump during the recent presidential debate that Biden and his son allegedly engage in unethical business practices in Ukraine for personal gain, with the former VP calling it a "smear campaign" ahead of the election.