Jeff Bridges Feels 'Fortunate' Despite Being Diagnosed With Lymphoma

Using his Twitter account to make his diagnosis public, the veteran actor says, 'Although it is a serious disease, I feel fortunate that I have a great team of doctors and the prognosis is good.'

AceShowbiz - Jeff Bridges is staying optimistic despite illness. The "Hell or High Water" actor took to Twitter on Monday, October 19 to announce that he's been diagnosed with lymphoma, a cancer that begins in infection-fighting cells of the immune system, called lymphocytes.

He began his post by making a reference to his character in "The Big Lebowski", saying, "As the Dude would say… New S**T has come to light." Jeff added, "I have been diagnosed with Lymphoma. Although it is a serious disease, I feel fortunate that I have a great team of doctors and the prognosis is good."

Even though the veteran actor did not provide further details about his diagnosis, he said that he was beginning treatment and planned to keep his fans updated. "I'm starting treatment and will keep you posted on my recovery," so he wrote.

Naturally, many fans and followers began flooding the replies section of his post with prayers and supports. Fellow actor George Takei encouraged him, "You're a fighter. You can beat this." Meanwhile, another person wrote, "You always have the right sight line on things like this, Jeff. Staring down something like this with positivity is inspiring for so many battling a similar beast. Much love and respect, good sir."

In response to the prayers, Jeff later returned to the micro-blogging site to express his gratitude and used this opportunity to encourage others to vote in the upcoming election. "I'm profoundly grateful for the love and support from my family and friends. Thank you for your prayers and well wishes," he said. "And, while I have you, please remember to go vote. Because we are all in this together. Vote.org. Love, Jeff." 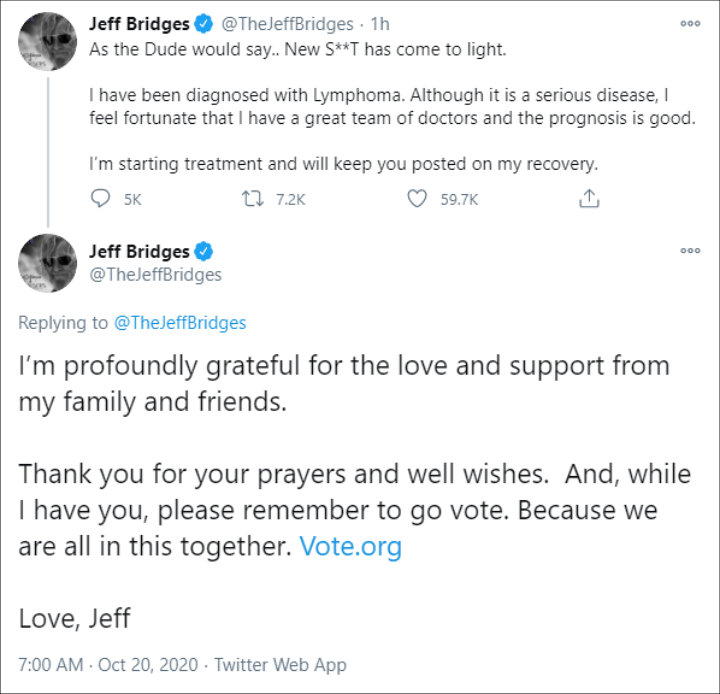 As mentioned above, lymphoma is a cancer that begins in infection-fighting cells of the immune system, called lymphocytes. There are two main types: Hodgkin's lymphoma and non-Hodgkin's lymphoma. Treatment for the disease usually involves chemotherapy, various medications, radiation therapy and, in rare cases, can require a stem cell transplant.

Carole Baskin Comes Out as Bisexual: 'I Was Always Very Male-Oriented'

Jeff Bridges Thrilled as His Tumor Has 'Drastically Shrunk'